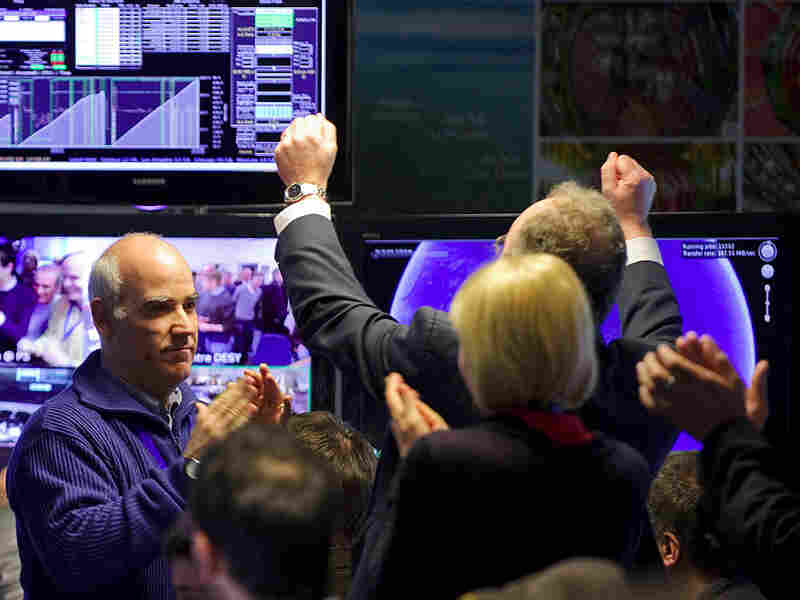 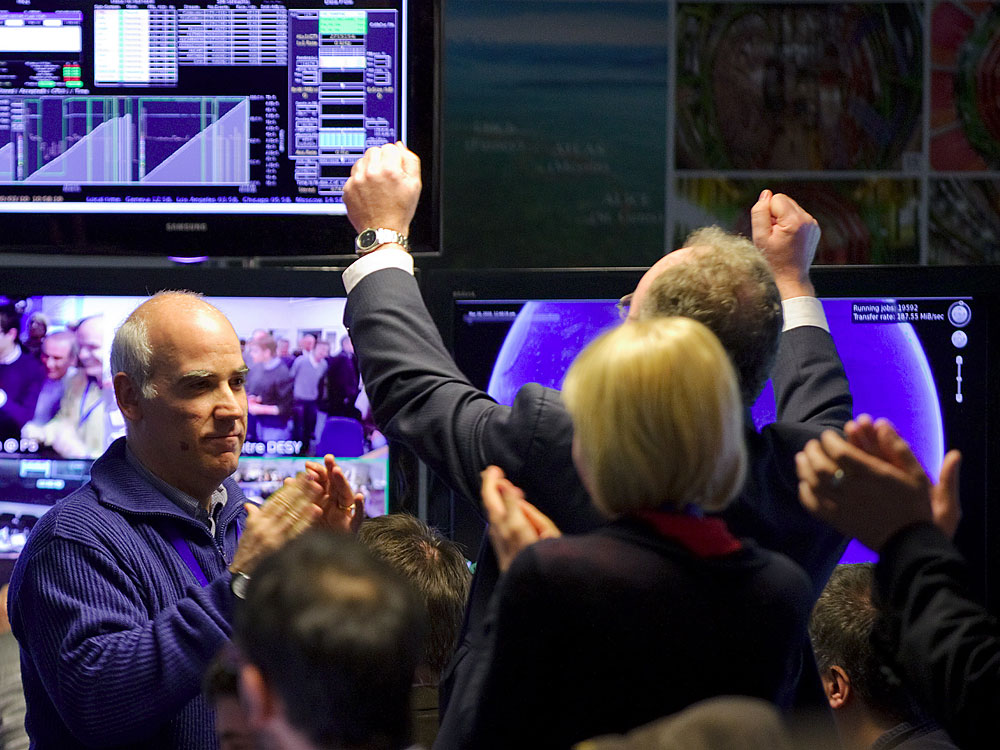 Scientists in Geneva cheered early Tuesday after the Large Hadron Collider started making subatomic particles collide head-on at energies far greater than have ever been achieved before.

The $10 billion particle accelerator straddles the Swiss-French border and has been 15 years in the making. It is designed to send beams of protons whizzing around a 17-mile circular tunnel, and then smash them together at high speed, creating a shower of debris that can be studied to learn more about the basic building blocks of the universe.

A Whole New Scale Of Collisions

The concept of having atomic particles collide in this way is not a new idea, but, in the case of the LHC, the collision energies are completely off the chart.

"This is physics in the making, the beginning of a new era, we have collisions at 7 TeV [teraelectron volts]," Paola Catapano, a CERN scientist and spokeswoman, told Agence France-Presse. A teraelectron volt is a measure of energy.

To put this in perspective, a mosquito uses 1 TeV when it's flying. So, at first, 7 might not seem like that much. But the difference is that, in the LHC, you take all that energy, and pack it into a small subatomic space. As a result, you get a huge amount of energy in that small space, and it's enough to blow atomic particles to bits.

Up And Running, But Not Full Throttle

The LHC is running at only about half-capacity today, and it will be for the next couple of years. Scientists will then turn it off to do some upgrades and turn it back on in 2013 or so. 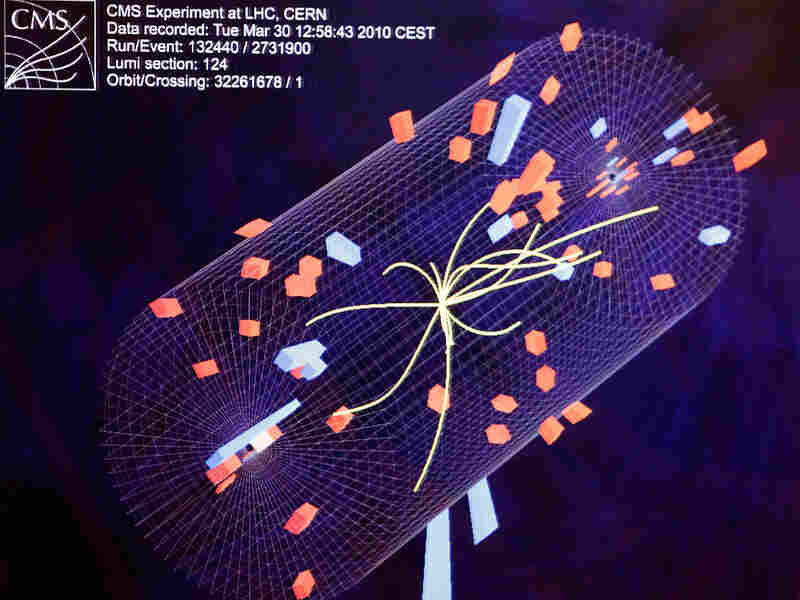 A control room display at CERN shows data from a subatomic collision inside the Large Hadron Collider. The $10 billion particle accelerator directed two proton beams into each other at energies far greater than ever before. Anja Niedringhaus/AP hide caption 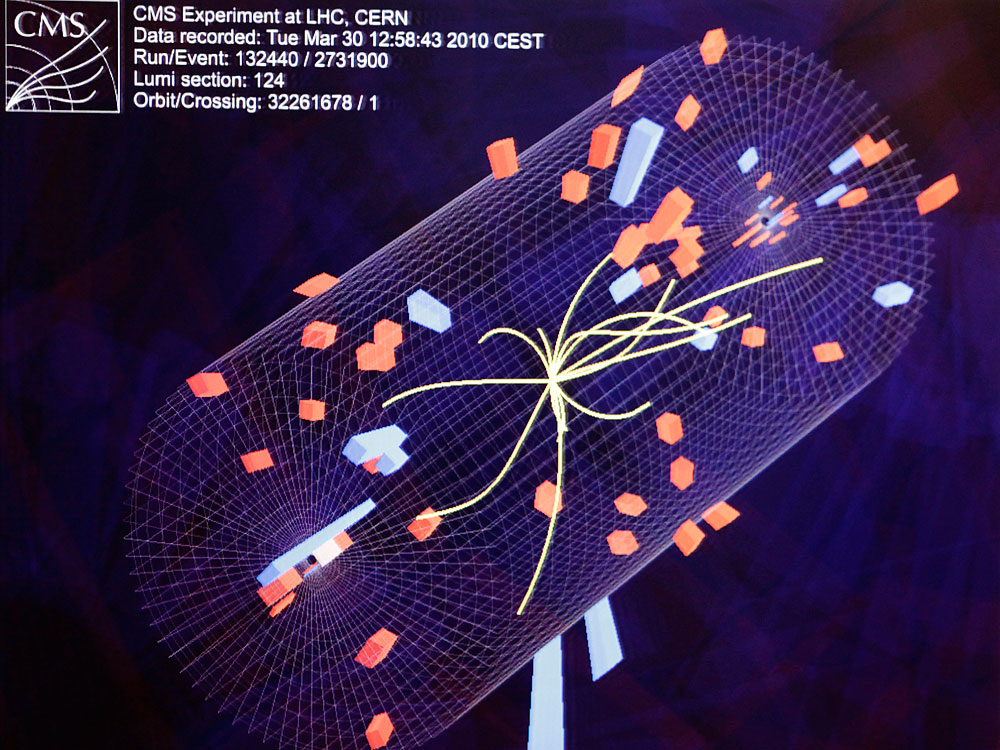 A control room display at CERN shows data from a subatomic collision inside the Large Hadron Collider. The $10 billion particle accelerator directed two proton beams into each other at energies far greater than ever before.

Once at full power, scientists hope the LHC will help unlock some of the most important questions of physics.

Scientists know that only 4 percent of the matter in the universe is actually visible. The rest, according to theory, is a mix of so-called dark matter and dark energy. But by looking at the subatomic debris from these collisions, scientists are hoping they can sort out what those invisible sources of energy and matter are.

The ultimate prize would be to find a particle called the Higgs-Boson — it's the linchpin of modern physics. It's been predicted by a theory called the Standard Model. Some people even call it the "God particle." That's because this particle could help explain how the energy from the Big Bang turned into mass.

"This will give us a clue of how we were created in the beginning," CERN scientist Despiona Hatzifotiadu told AFP.

But they're unlikely to find the Higgs particle until the Hadron Collider is at full power. And, even then, it will probably have to run for about a year or so before it can produce enough Higgs-Bosons for actual study — if it produces any at all, that is.

LHC Could Cause Black Holes, But Tiny Ones

Some people have been wondering if there's a danger associated with the LHC — that it might end up creating a black hole. Experts say collisions of these energies do happen elsewhere in the universe. Cosmic rays, for one, pack this kind of energy. And we're still here.