Accessibility links
In London, A Stirring 'War Horse' Of A Drama The New London Theatre's War Horse, a captivating story about war and friendship, is told with the help of life-sized horse puppets. Jeff Lunden speaks with the actors -- and the puppeteers -- behind this particular type of mechanized magic. 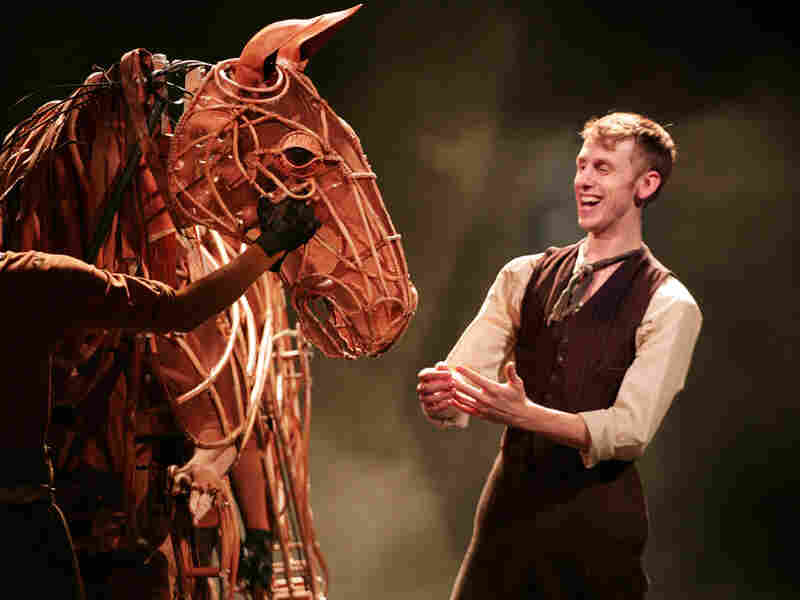 Robert Emms plays Albert, a naive country boy who follows his beloved horse, Joey, to the battlefields of World War I. Based on a children's book by Michael Morpurgo, the play chronicles the horrors of war as seen through a horse's eyes. Simon Annand hide caption 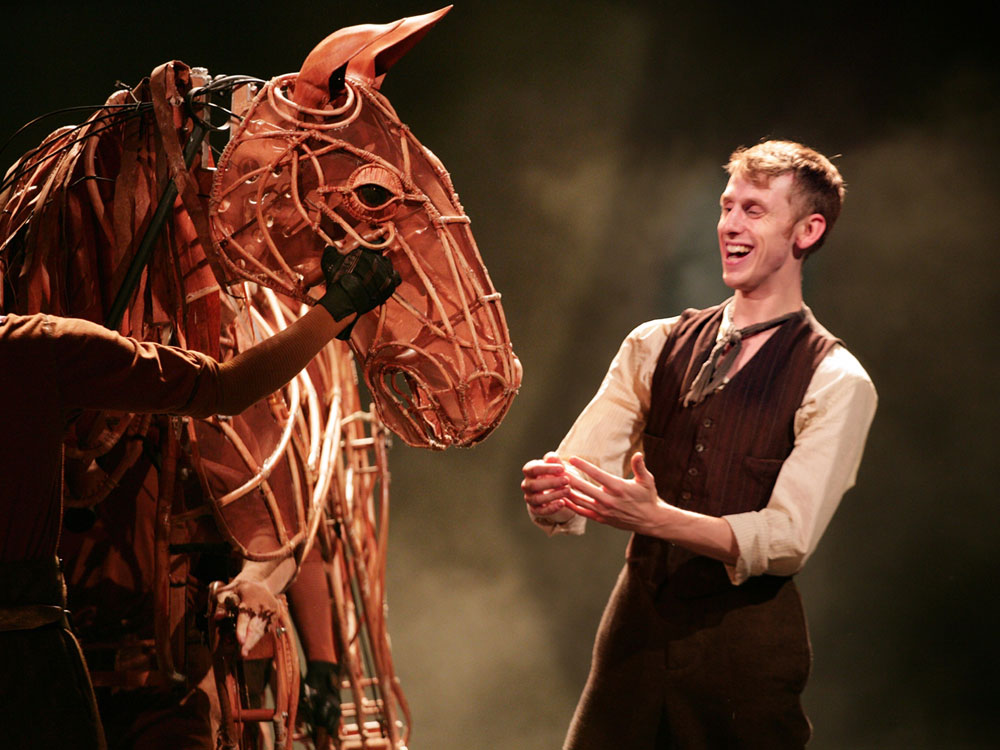 Robert Emms plays Albert, a naive country boy who follows his beloved horse, Joey, to the battlefields of World War I. Based on a children's book by Michael Morpurgo, the play chronicles the horrors of war as seen through a horse's eyes.

In London, a drama adapted from a children's book took the theater world by storm when it premiered at the National Theatre in 2007 -- and it's been enough of a hit in its current commercial run in the West End that a visit to New York's Lincoln Center is in the works. Set during World War I, War Horse is the story of a boy, Albert, and the farm horse he raises from a foal. Book and play alike track the two from the bucolic English countryside to the bloody battlefields of France, through the cataclysmic events of the Great War.

The book, though, is narrated not by Albert, but by Joey -- the horse -- who details his adventures for the reader. That made for some challenges when it came to bringing War Horse to the stage. In fact, playwright Nick Stafford's version is a very different animal from the book, according to two of the performers who help create the character of Joey.

"The horse was never going to talk," says Matthew Burgess.

And that's how Burgess and his colleague Toby Olie -- both puppeteers -- came to be involved.

'It Had To Be Done Visually'

The challenge was to create a believable character, to get the audience to invest emotionally in Joey's journey, without tipping over into pantomime -- or indulging the anthropomorphic impulse.

'His Place Is With The Army'

"It had to be something that was done visually," Burgess says.

What they've done visually sent London's critics and audiences into raptures. The puppets are wondrous -- life-sized, made of cane and canvas and metal, designed by the Handspring Puppet Company of South Africa and each manipulated by a team of puppeteers. They gallop and trot, snort and whinny, carry human riders into battle. They're at once highly realistic and completely theatrical.

"What's exciting about it is, you are aware of ... the human machinery, as it were, that's helping bring these animals to life," says Matt Wolf, critic for the International Herald Tribune.

Creating the illusion is complicated. Each puppet weighs well over 100 pounds without a rider, and it takes three operators to bring each one to life. Burgess plays what he and his colleagues call Joey's "heart."

The movement of ears and head, the flicking of a tail, the stamping of the hooves -- these all communicate a horse's emotions. The puppeteers spent a great deal of time learning about horse behavior, says Olie, who depending on the night is either the head of Joey or that of a thoroughbred cavalry horse, Topthorn. 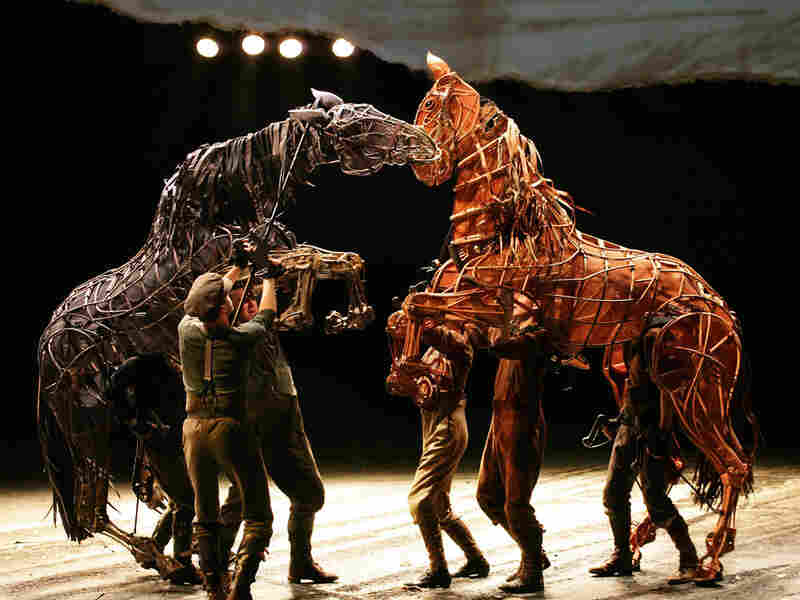 Adrian Kohler, co-founder of the company that made War Horse's puppets, uses the techniques and tools of shipbuilding -- his father was a shipwright -- to build his creations. Simon Annand hide caption 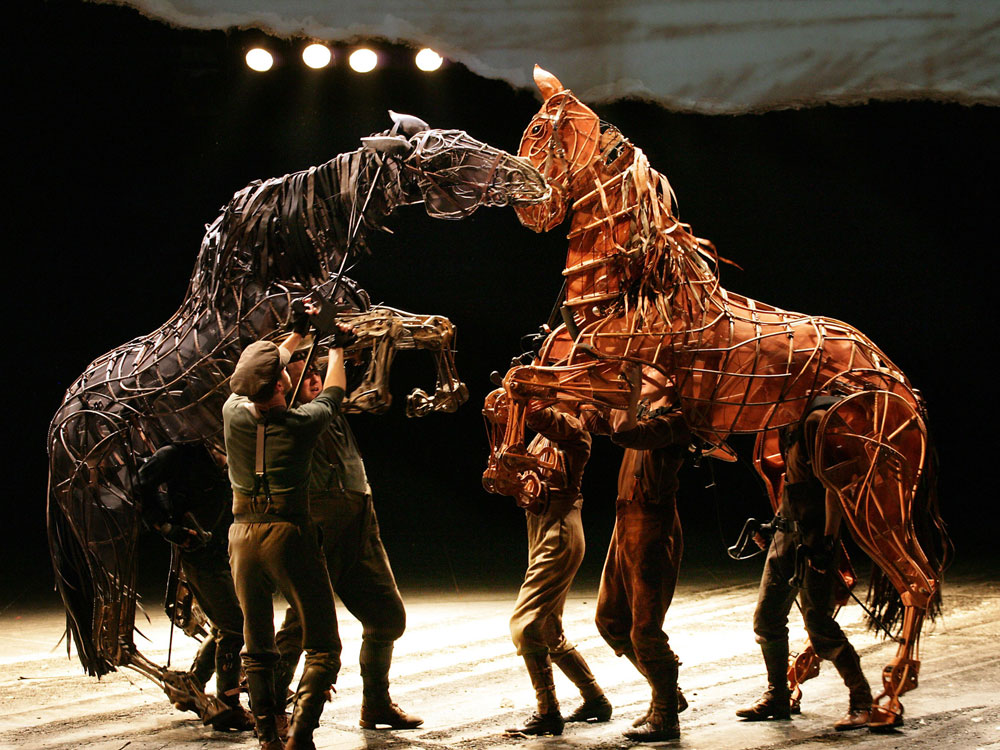 Adrian Kohler, co-founder of the company that made War Horse's puppets, uses the techniques and tools of shipbuilding -- his father was a shipwright -- to build his creations.

He ticks off the various ways he and his colleagues did their research: "Two weeks puppet training before rehearsals with the actors start. A lot of YouTube videos. Visits to the King's Troop stables. Monty Roberts, the horse whisperer, came into rehearsals."

And the puppeteers don't just set out to move like a horse. They have sound like a horse: whickering, nickering; whinnies. "Snorty, blowy stuff," as Olie puts it.

After a while, Burgess says, the teams kind of become the horse.

"There are hours of work that we do -- predominantly with breath," he says. "Breath is the key to making the team work. ... When we change breath, or we change the rhythm of the breath, we know that the horse has changed its emotional state."

An Emotional Story For Those Steeds To Bear

Of course, none of the work spent getting the horse puppets to behave like horses would mean anything without an emotional story to tell around them. Robert Emms plays Albert, the boy who loves his horse so much that he runs away to join the Army after his father sells Joey to the British cavalry. Albert -- like Joey -- learns about the horror of war.

"He goes on a massive emotional journey to find the horse again," Emms says. "It's not a happy ending, by any means. ... They've both been scarred."

Yet Albert, Emms insists, is a symbol of hope and courage. His faith that he'll locate Joey gets tested severely on the battlefield, but it doesn't falter. And he makes real sacrifices to pursue that reunion.

More from the Puppeteers

'How The Puppets Are Built'

'Acting Alongside A Puppet'

"I know that sounds incredibly corny," Emms says. "But it's one reason that the show, for me, every night is a joy to do."

Albert's sacrifices aren't the only ones the story honors and mourns. World War I marked a pivotal point in the evolution of warfare. Mounted cavalry began to disappear, and trench warfare and tanks increasingly made their mark. Horses became more and more redundant, and animals like Joey saw their roles reduced to beasts of burden. And still they died.

If War Horse has anything to do with it, London audiences -- and starting next March, their counterparts in New York -- will remember it for a long time to come.