Accessibility links
TiVo's Goal: The Google Of TV The company that introduced America to digital video recording hopes to change TV watching again. Its new digital box draws video from cable, broadcast and the Internet. But there are challenges: a hefty price tag and Google's own TV plans. 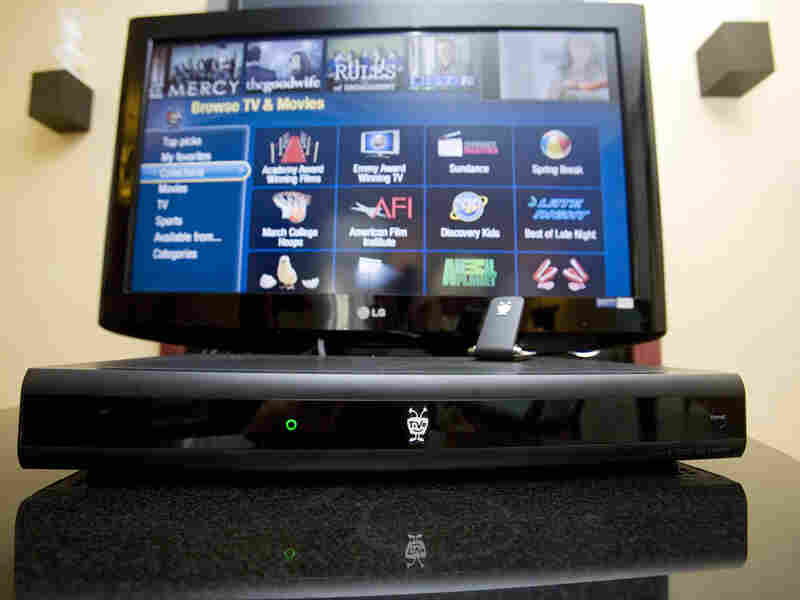 TiVo is trying to re-establish its place in the digital recording world with a new box, called TiVo Premiere, that draws video from a variety of sources, including cable, satellite and the Internet. Mark Lennihan/AP hide caption 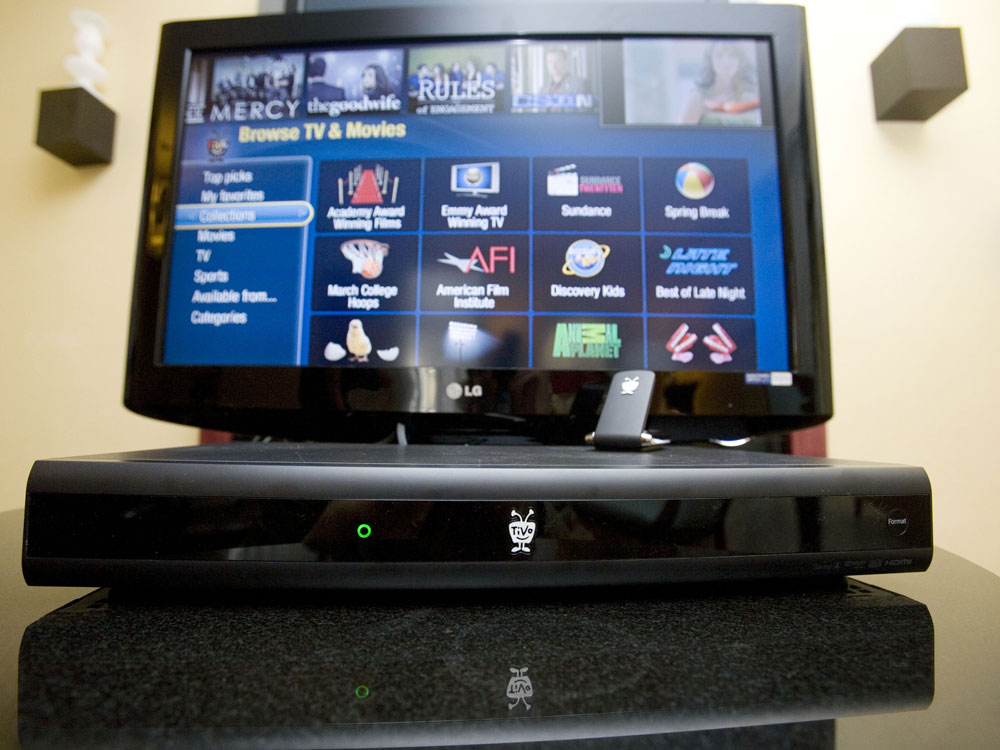 TiVo is trying to re-establish its place in the digital recording world with a new box, called TiVo Premiere, that draws video from a variety of sources, including cable, satellite and the Internet.

TiVo is on another quest to change the way the world watches TV. The company just began selling a new box that will draw video and music from cable, broadcast and the Internet.

About a decade ago, TiVo helped transform the TV world. Now, about one-third of American households can pause TV shows and movies, record multiple shows at once and skip through commercials.

There's a big problem for the company, though: Most of those people are using digital video recorders that aren't made by TiVo.

So the company is dreaming big — so big that Joe Miller, TiVo's senior vice president for retail sales and marketing, touts the new box as the "Google of television." .

Take a popular show like House. Right now, you can watch it live on Fox, record it on your DVR, stream it on your computer or even download it from a service like iTunes. It's possible to do all this from home if you have the tech savvy, money and patience — plus a bunch of wires and remote controls.

Miller says the new box, dubbed the TiVo Premiere, can do all of that: "Your TiVo would find you House that's on broadcast, House that's in syndication, all of the past seasons that might be on Amazon or another service."

Also, the TiVo Premiere, which starts at $299 plus service charges, will find any House episode that's on YouTube and let you listen to the soundtrack through a music service. And, Miller says, it will play on your TV with one box, one set of wires and one remote.

Now, those Google-esque ambitions are lofty, but, like Google, TiVo not only gave the world a new technology — it also provided a new verb, as in, "Did you catch Idol last night?" "No, I TiVo'd it." Unlike Googling, however, the vast majority of TiVoing doesn't occur while using an actual TiVo recorder.

James McQuivey, an analyst for Forrester Research, says there are only about 1.5 million TiVo-brand DVRs in American living rooms right now.

"There are, meanwhile, another 30 million people in the U.S. who have some kind of DVR, and that's a hard reality for TiVo to face when they essentially invented the category," McQuivey says.

People love DVRs because they want to be able to pause and rewind TV, and zip through commercials. But McQuivey says TiVo has found it hard to find new customers ever since cable and satellite companies started making their own boxes.

"A basic DVR made by a cable company is so much better than what you have when you don't have a DVR at all," McQuivey says. "It's a little bit like making it just outside the gates of heaven, and it's so pleasant and warm that you don't realize that just a couple of steps away there's a better experience to be had."

He says the TiVo Premiere faces big challenges. The video landscape is intimidating, and there are already many gadgets that do parts of what TiVo's new product promises to do. You could buy a Roku, a VUDU, a Slingbox or any number of other boxes. Even if the TiVo Premiere is the one gadget that rules them all, McQuivey says it's expensive and daunting all on its own.

"If they're going to solve all of your video problems, by definition, it's going to be hard to install," McQuivey says. "So there's a big upfront hurdle of price and hassle."

That could be a problem because the whole point of TiVo's new box is to eliminate hassles. Even if the TiVo Premiere delivers on its promise, it may be hard to convince people that there isn't a better box on the horizon.

In fact, Google itself is supposedly working on a product that would become the Google of TV. The name? Google TV.