Accessibility links
Tomato Gardeners, Plant On! Late Blight Is Gone The fungus that killed tomato plants on the Northeast last year probably died during the winter, says Mike McGrath, the host of the weekly public radio show You Bet Your Garden. He says that late blight typically blows up from the South, where spores grow year round. 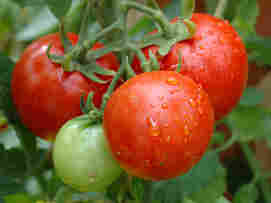 Tomato plants throughout much of the Northeast were hit last summer with a devastating fungal disease called "late blight." It's the same disease that led to the Irish Potato Famine in the 1840s.

But as the climate gets warmer this year, green thumbs probably won't face the same threat, says Mike McGrath, the host of the weekly public radio show You Bet Your Garden.

That is, as long as there's cleanliness on the back end of the industry.

"Last year, the late blight outbreak was so bad because it actually began with infected plants — baby plants — that were released into the trade all ... up and down the East Coast," McGrath tells NPR's Michele Norris. "So, gardeners started out with dying plants, unfortunately."

Spores That Go The Distance

McGrath says that gardeners in the Northeast who had late blight last year don't need to replace garden tools or worry about contaminated soil.

"Late blight typically occurs in the Northeast, when it slowly works its way up by windborn spores from the South, where they grow year round," he says. "So most years, you start out with a clean garden because the spores can't survive wintertime outside."

Everybody wants to grow tomatoes. Tomatoes are the gateway drug to all of gardening.

Mike McGrath, host of the weekly public radio show You Bet Your Garden

The spores can travel 30 miles in a day if the wind is right, McGrath says.

But he says that starting your tomato plants from seed won't protect them from late blight. Most people whose gardens became affected did not begin with infected plants, McGrath says. Rather, he says, the spores blew into their garden from other gardens.

"I didn't buy any of my starts this year from any stores that had infected plants," he says. "I start all of my tomatoes from seed. But the wind and the weather last year just carried it from garden to garden with lightning speed."

Tips For (Even Novice) Tomato Gardeners

"Everybody wants to grow tomatoes. Tomatoes are the gateway drug to all of gardening," McGrath says. "The supermarket tomatoes are so terrible that even people who think they have black thumb want to get out there and grow some of their own to get that childhood flavor of a fresh garden-ripe tomato that they remember."

For optimal tomato plant results, McGrath says gardeners shouldn't rush into planting. The worst thing gardeners can do is put out their plants too early. He recommends waiting until the night temperature consistently hovers around 55 degrees.