Accessibility links
Obama Ends Ban On East Coast Offshore Drilling The president announces policy changes that would allow drilling on tracts as close as 50 miles to the Virginia shore, and end a longstanding moratorium on drilling from Delaware to Florida. Exploration in the Gulf of Mexico would be expanded eastward, and swaths north of Alaska would be opened up. 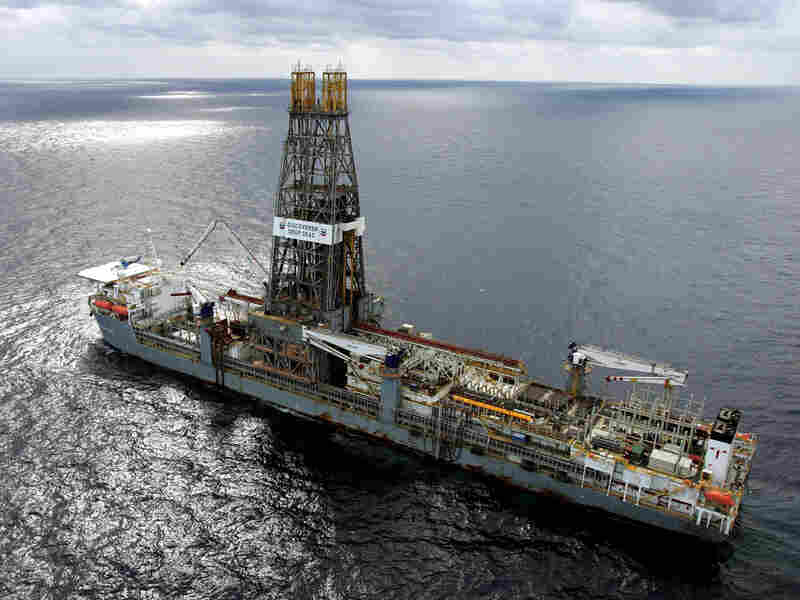 The Discoverer Deep Seas drill ship sits off the Louisiana coast in the Gulf of Mexico in this 2006 photo. President Obama's plan expands eastward the area of the Gulf where drilling is already permitted. Alex Brandon/AP hide caption 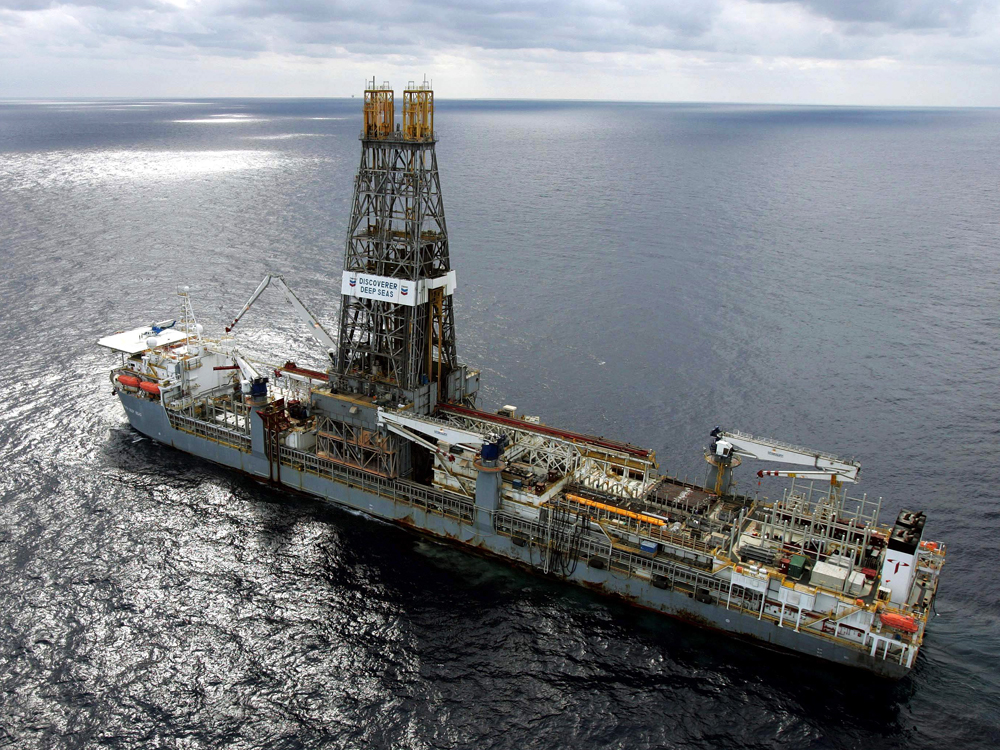 The Discoverer Deep Seas drill ship sits off the Louisiana coast in the Gulf of Mexico in this 2006 photo. President Obama's plan expands eastward the area of the Gulf where drilling is already permitted.

President Obama announced the end of a decades-old ban on oil and gas drilling along much of the U.S. Atlantic coast and northern Alaska on Wednesday, as part of an effort to reduce foreign imports and win support for an energy and climate bill.

The changes in policy would allow drilling on tracts as close as 50 miles to the Virginia shore, and end a longstanding moratorium on drilling from Delaware to central Florida. Exploration in the Gulf of Mexico would be expanded eastward, and swaths north of Alaska would be opened up.

"For decades we've talked about how our dependence on foreign oil threatens our economy — yet our will to act rises and falls with the price of a barrel of oil," Obama said during a speech at Andrews Air Force Base in Maryland. He also praised the military's efforts to operate ships, tanks and planes on alternative fuels.

"There will be those who strongly disagree with this decision," said Obama, who was accompanied by Interior Secretary Ken Salazar. "But what I want to emphasize is that this announcement is part of a broader strategy that will move us from an economy that runs on fossil fuels and foreign oil to one that relies more on homegrown fuels and clean energy."

The U.S. Geological Survey estimates that the U.S. Atlantic coast could hold as much as 37 trillion cubic feet of gas and 4 billion barrels of oil.

The administration has reportedly rejected proposed leases in Alaska's environmentally sensitive Bristol Bay, and a moratorium on drilling off the West Coast would be left in place.

The new policy reverses decades of precedent and is sure to anger environmentalists who have long opposed such a move. Rep. Edward Markey (D-MA), who regularly takes a pro-environmental line, urged oil companies to drill in areas they've already leased before moving on to new coastal areas.

Allows oil and gas drilling along the Atlantic Coast from Delaware to central Florida.

Opens up Alaska's northern Arctic coast along the Chukchi Sea and the Beaufort Sea to exploration. Drilling would be allowed if scientists conclude the areas are suitable for offshore extraction.

Expands drilling in the Gulf of Mexico eastward, closer to Florida's Gulf Coast, by 2022 if Congress allows a moratorium currently in place there to expire.

Safeguards Alaska's environmentally sensitive Bristol Bay, which had reportedly been under consideration for drilling.

Keeps in place a ban on drilling off the U.S. West coast.

The conservation group Oceana labeled the president's move to lift the offshore drilling ban a "wholesale assault" on the oceans.

"Expanding offshore drilling is the wrong move if the Obama administration is serious about improving energy security, creating jobs and averting climate change," said Oceana senior campaign director Jacqueline Savitz. She added that the U.S. should instead focus on expanding wind and other renewable forms of energy.

Political observers say the changes to oil and gas drilling policy are likely aimed at swaying some members of Congress to support a comprehensive energy and climate bill — one that would encourage alternatives to fossil fuels — that is the next major piece of legislation on the administration's agenda.

Obama hinted at the about-face in policy during his State of the Union speech in January, in which he said he was open to the idea.

Oil companies have been waiting for years for the green light to expand drilling outside the Gulf of Mexico. Aside from safeguarding Bristol Bay — effectively designating it a protected zone — Obama's plan offers few other concessions to environmentalists.

But actual drilling is likely years away, as individual state legislatures and governors would still need to approve exploration and drilling off their coasts and determine how near to shore they would allow it. Those states that permit drilling could get a chunk of the revenue, if Congress approves.

In Alaska's northern Chukchi and Beaufort seas, scientists would first study the area to determine whether it is suitable for drilling before new leases would be issued. An expansion of drilling in Cook Inlet to the south would also be allowed to go forward. The changes would be administered by the Interior Department.

The proposed expanded area in the eastern Gulf of Mexico, however, will effectively be on hold for years, as the moratorium on drilling there doesn't expire until 2022.

Congress had prohibited drilling off most of the U.S. coastline for decades, but that ban expired two years ago, clearing the way for the changes.

The first ban on drilling — for much of California's coast — was put in place by Congress in the early 1980s. Over the next decade, lawmakers expanded the ban to the rest of the Pacific coast and much of the Atlantic seaboard. Executive orders issued by Presidents George H.W. Bush and Bill Clinton strengthened the prohibitions. But President George W. Bush lifted the presidential directive on the ban in 2008, and months later, Congress allowed it to expire.

Obama's speech included some provisions meant to placate environmental groups. The Environmental Protection Agency and the Transportation Department is finalizing increased fuel efficiency standards on new cars, and the president announced that more hybrid vehicles will be added for service in the government fleet.

"Already, we've made the largest investment in clean energy in our nation's history," Obama said. "It's an investment that's expected to create or save more than 700,000 jobs across America: jobs manufacturing advanced batteries for more efficient vehicles, upgrading the power grid so that it's smarter and stronger, and doubling our nation's capacity to generate renewable electricity from sources like the wind and the sun."

NPR's Scott Horsley and Christopher Joyce contributed to this report, which includes material from The Associated Press.