Accessibility links
The Nation: Seeking Security In Russia Olga Razumovskaya of The Nation says that Russians will not be safe until there is a political and economic solution to the decades-long war and occupation of Chechnya and the surrounding regions.

The Nation: Seeking Security In Russia

The Nation: Seeking Security In Russia 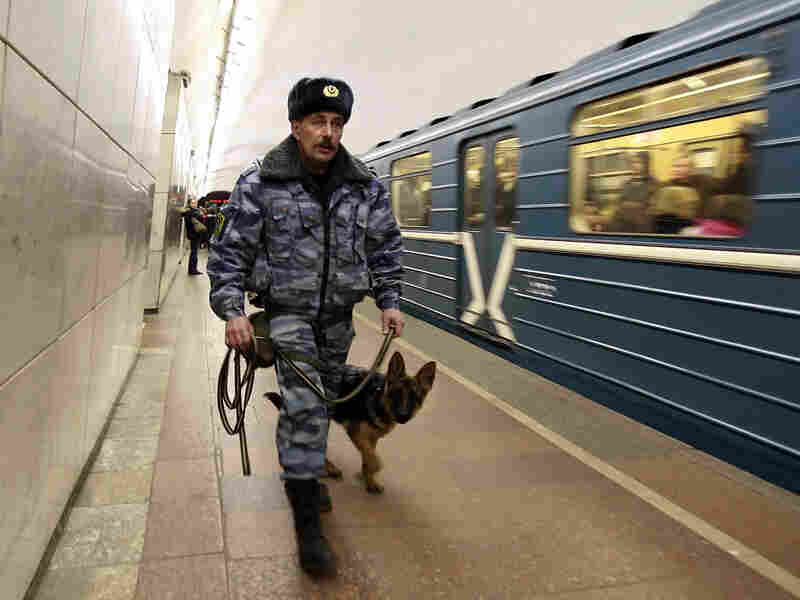 A Russian police officer with a bomb-sniffing dog patrols inside the Lubyanka metro station in Moscow on March 30, 2010. Olga Razumovskaya says Russia can not have complete security until peace agreements are met with Chechnya STR/AFP/Getty Images hide caption 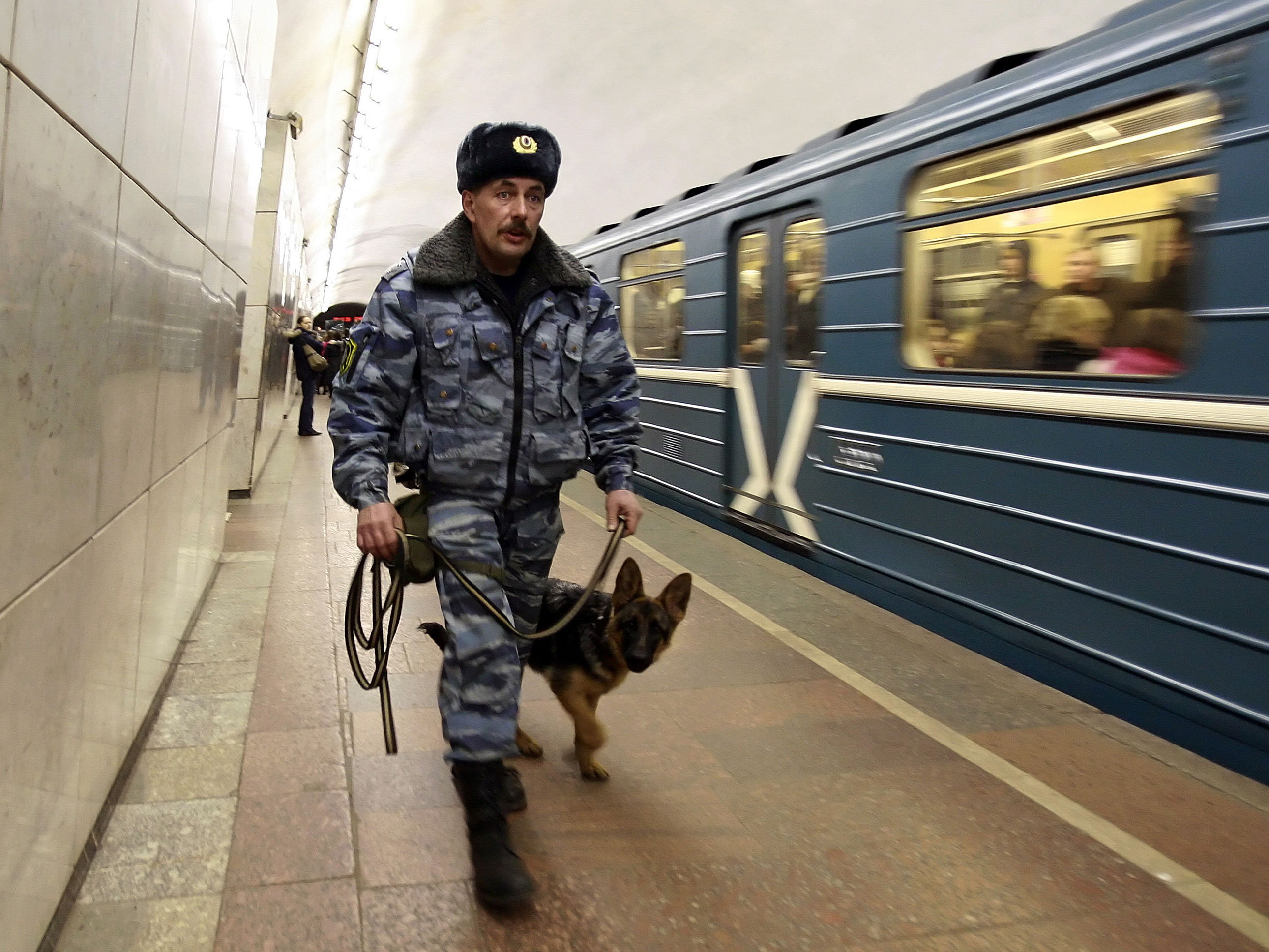 A Russian police officer with a bomb-sniffing dog patrols inside the Lubyanka metro station in Moscow on March 30, 2010. Olga Razumovskaya says Russia can not have complete security until peace agreements are met with Chechnya

Thirty-eight are dead, seventy-three hospitalized with injuries; ten walked into the hospitals for medical attention but did not stay. These are the latest numbers from Russia's Ministry of Emergency Situations. On March 29, 2010, two female suicide bombers walked into the Moscow subway in the midst of rush hour, and at 7:57 am the first blast instantly killed over two dozen people in Lubyanka subway station near the city center and the the headquarters of the Federal Security Service (FSB, formerly the KGB). Forty minutes later, a second explosion happened on the same line of the subway, only three stops away.

Moscow suddenly became a site for citywide PTSD. The city's subway, which carries anywhere between 7 to 10 million passengers a day, on the day of the blasts only took in a fraction of that number. As 22-year-old Daria Kovtunova, personal assistant at Ernst and Young, put it, "Only those who had nothing to lose" took the subway after the explosions: immigrants, unmarried men and tired Moscovites who could not afford a taxi.

It is not the first time that the metro, the symbol of Moscow's vitality and mobility, has come under attack. Most recently, in late August of 2004, a female suicide bomber set off an explosive device at the entrance hall to the Rizhskaya metro station, killing herself and nine other people and sending over four dozen to the hospital. Before that the largest subway bombing in terms of casualties was in February of 2004, between Paveletskaya and Avtozavodskaya metro stations: fifty were killed, more than a hundred injured.

Only hours after the blasts, secretaries at a call center of a major foreign consulting firm in Russia spent hours crying and frantically calling their colleagues to make sure everybody was safe. Cell phones were constantly ringing in offices and were sitting in everybody's lap on the subway, ready to be picked up and deliver the hopefully good news about friends and colleagues. Friends and relatives outside of Moscow too were trying to reach their loved ones, shocked at what they were being shown on TV. My roommate tried to reach her mother on her cell phone and the latter had to step out of the subway panting, her blood pressure rising, to take a breath and realize that neither she nor her daughter were anywhere near either of the two blast sites.

I found out about the blasts at 10 am when I turned on the TV and started to quickly get ready for work. The full extent of what had happened did not hit me until much later. I went to work only to discover the subway a ghost town and to see Russian police officers crowded in front of exits and entrances to all of the city's subway stations, even those far from the two sites of the explosions.

Meanwhile, on the other side of the city, cabbies were reportedly taking 3,000 to 4,000 rubles per ride (approximately $100-$135) and traffic jams paralyzed downtown. A helicopter was landing next to FSB headquarters. Its building, which some say was the target of the explosion, stands within walking distance of where the first suicide bomber took the lives of dozens of innocent people. After that, events unraveled quickly: victims were driven, airlifted or walked in to ten different hospitals across Moscow. Part of the affected subway line was shut down until about 6 pm of the same day and 3,500 people were evacuated. Officials encouraged people to take any means of elevated transport. By early afternoon it all looked, sounded and seemed surreal, like a scene from a Hollywood blockbuster.

Today on the national day of mourning, a few companies — SAP, a business management software company, among them--have encouraged their employees to work from home for the next two days. Life goes on, we will again take the subway, we show up at work in the morning, we continue to live a normal life. A colleague in my office gave birth to a baby on the day of the blasts. But when are we going to be told the truth about what is going on in the Northern Caucasus, and when will we be able to feel completely safe again? Many believe Russians will never be safe until there is a political and economic solution to the decades-long war and occupation of Chechnya and the surrounding regions.

Yet it is important to ask ourselves these questions. Moscovites and Russians across the country were shaken by this experience not so much because a terrorist attack had occurred but more so because they had been misguided by their own leaders, President Dmitriy Medvedev and Prime Minister Vladimir Putin, about the extent of the problems that still remain in the Caucasus. State-controlled television (which is how most of the population gets its news every day) has allowed most people to forget the Chechen conflict. Every so often the reminder sneaks into our subway and sits right next to us in the subway car disguised as a "black widow," as they call the suicide bombers. One can only guess that those widows may be mothers, sisters or wives of a Chechen who has been kidnapped, tortured or disappeared under the regime of Chechnya's current president Ramzan Kadyrov. Kadyrov hurried to condemn the terrorist act, but that does not absolve him of the responsibility to protect his citizens, or at minimum to not overlook countless human rights violations and acts of violence that happen in the republic on a daily basis.

The only force in the republic that continues to document human rights abuses in the region is Memorial, one of Russia's leading human rights organizations, whose researcher Natalia Estemirova was kidnapped and killed last summer. As Tatyana Lokshina, senior researcher at Human Rights Watch, said in an interview, Kadyrov seems to have waged a war against Memorial.

Another thing to keep in mind is that in Russia, still suffering from bouts of xenophobia and plagued by the inefficiencies and corruption of its police force, the time will soon come to look for scapegoats. The easiest target for finger-pointing would be local minorities: immigrants from the Caucasus and Central Asia, for whom profiling will likely increase. "Such incidents will worsen the situation for the migrants not only due to police harassment but also because of rising racist tension and xenophobic feelings in Russian society in general. The photos published by the press in Russia show mostly policemen who do their job to give the impression that the state institutions work effectively in case of such truly sad incidents, but you and I know that this is just one part of the story," said Henryk Alff, a freelance journalist and expert on migration issues.

Russia has been fighting wars in the Northern Caucasus for centuries. Today, the conflicts in that region have become a cancer on the country's body politic — metastasizing in murderous ways. If Russia is to begin to protect its people from terrorist acts, it must begin to address, as even President Medvedev has mentioned, the root causes of the conflict between Moscow and the region. Only then, and not through ramped up repression, will the cycle of violence and vengeance come to an end.