Accessibility links
150 Years Later, Pony Express Rides On In Legend April 3 marks the 150th birthday of the Pony Express. The short-lived mail-relay system was a financial disaster doomed by the telegraph, but its thrilling story, which is often cloaked in myth, remains part of American folklore. 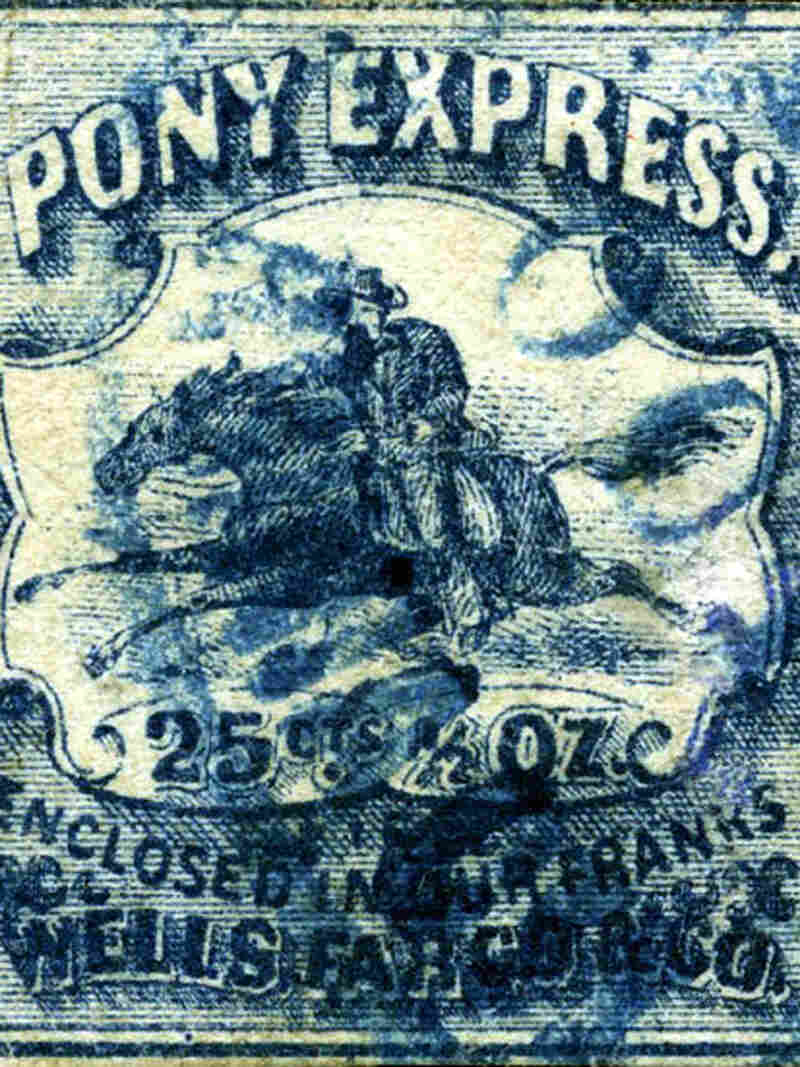 A stamp from a piece of mail delivered by the Pony Express. In the early days of the enterprise, it cost almost $100 in today's dollars to mail a letter across the country. Wikimedia Commons hide caption 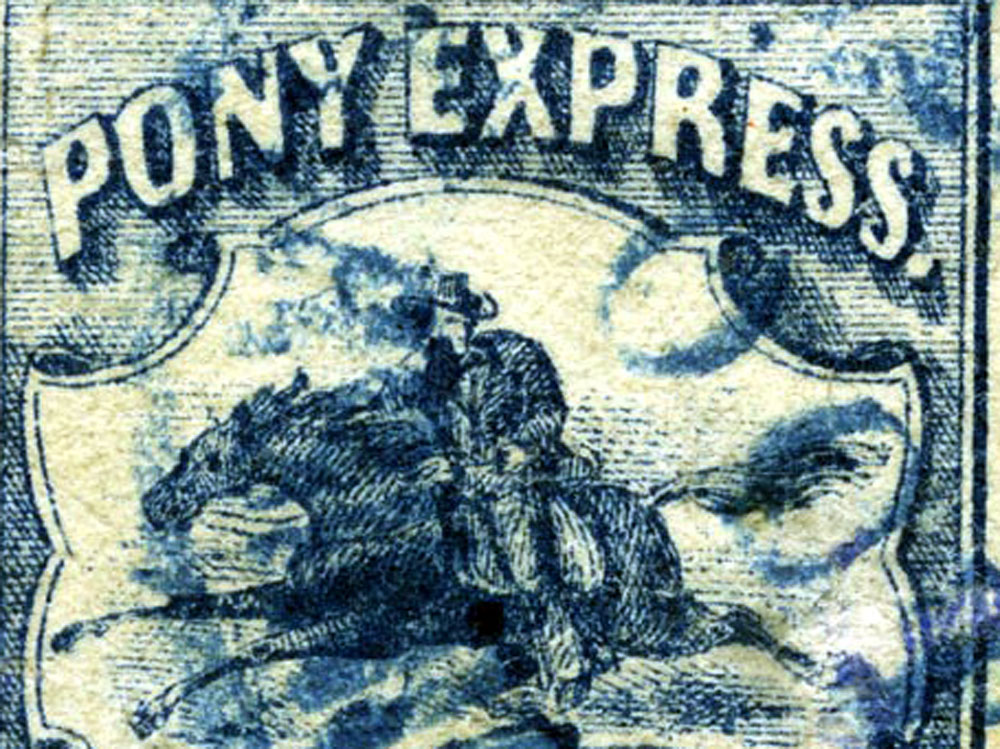 A stamp from a piece of mail delivered by the Pony Express. In the early days of the enterprise, it cost almost $100 in today's dollars to mail a letter across the country.

The Pony Express dispatched its first rider from St. Joseph, Mo., on April 3, 1860. It was an all-out, high-speed information delivery service that traversed nearly 2,000 miles of open, desolate and hostile land.

The goal was to bring faster mail service to California. As a business proposition, it was a total failure. The service was expensive -- $5 a letter (more than $100 by today's standards). But as a Western legend, the Pony Express has been going strong for 150 years.

Delivering The News And Mail Faster

In 1860, the American West was booming, and the East was boiling. Civil war was at hand. A vast wilderness and high mountains blocked the rich West from the rest of the country.

Rail and telegraph lines stopped in St. Joseph. It took a month for news reports and government dispatches to cross that information abyss by stagecoach, says Cindy Daffron, director of the Pony Express National Museum.

"This is what people [in the West] didn't like -- they were living out there with money," says Daffron. "The fastest means was four weeks, so the idea became, 'How do we do it faster?'"

A stagecoach line ran through the country to the south, but that territory was increasingly hostile to the Union. A shorter but rougher trail took a northerly route over the mountains.

Historian Gerry Chilcote says a struggling freight company called Russell, Majors and Waddell was already using it. "And so they came up with the idea of, 'why not carry the mail and get a government contract?'" says Chilcote.

Riders galloping 24/7 and relaying a mail bag from horse to horse and man to man could cover the distance in 10 days. The first Pony Express rider arrived in Sacramento, Calif., on April 13, 1860, and received quite a reception.

"Banners were hung across the street," says Joe Nardone, master historian for the Pony Express Trail Association. "It was lined -- people were cheering."

Nardone is also among the modern Pony Express enthusiasts who re-enact the ride every year.

Back in 1860, riding for the Pony Express was difficult work -- riders had to be tough and lightweight. There's a famous advertisement that reportedly read: "Wanted: Young, skinny, wiry fellows not over eighteen. Must be expert riders, willing to risk death daily. Orphans preferred."

But like a lot of things associated with the Pony Express, that ad may be just another tall tale that grew out of an absence of hard information. Even the name of the first rider is disputed.

"This is a company that kept no records whatsoever," says Chilcote, "They didn't know who the riders were two years afterwards, so a lot of this is 'fakelore,' we call it."

Today you can drive much of the route the Pony Express followed, but aside from a couple of old station buildings and markers, there isn't much to see. The legend of the Pony Express, though, is still going strong.

Watch an interview with Christopher Corbett about Orphans Preferred

"It doesn't have the baggage of the slaughter of buffalo and the decimation of Indians," says Corbett. "I think that's part of its appeal."

Corbett says Buffalo Bill's Wild West show probably did the most to keep the legend of the Pony Express alive. He says the show, which toured the world, always included the Pony Express in its productions.

Nearly all portrayals of the Pony Express stretch the truth, Corbett says. Lucky for his research, some of the original riders were asked about their experience before they died. 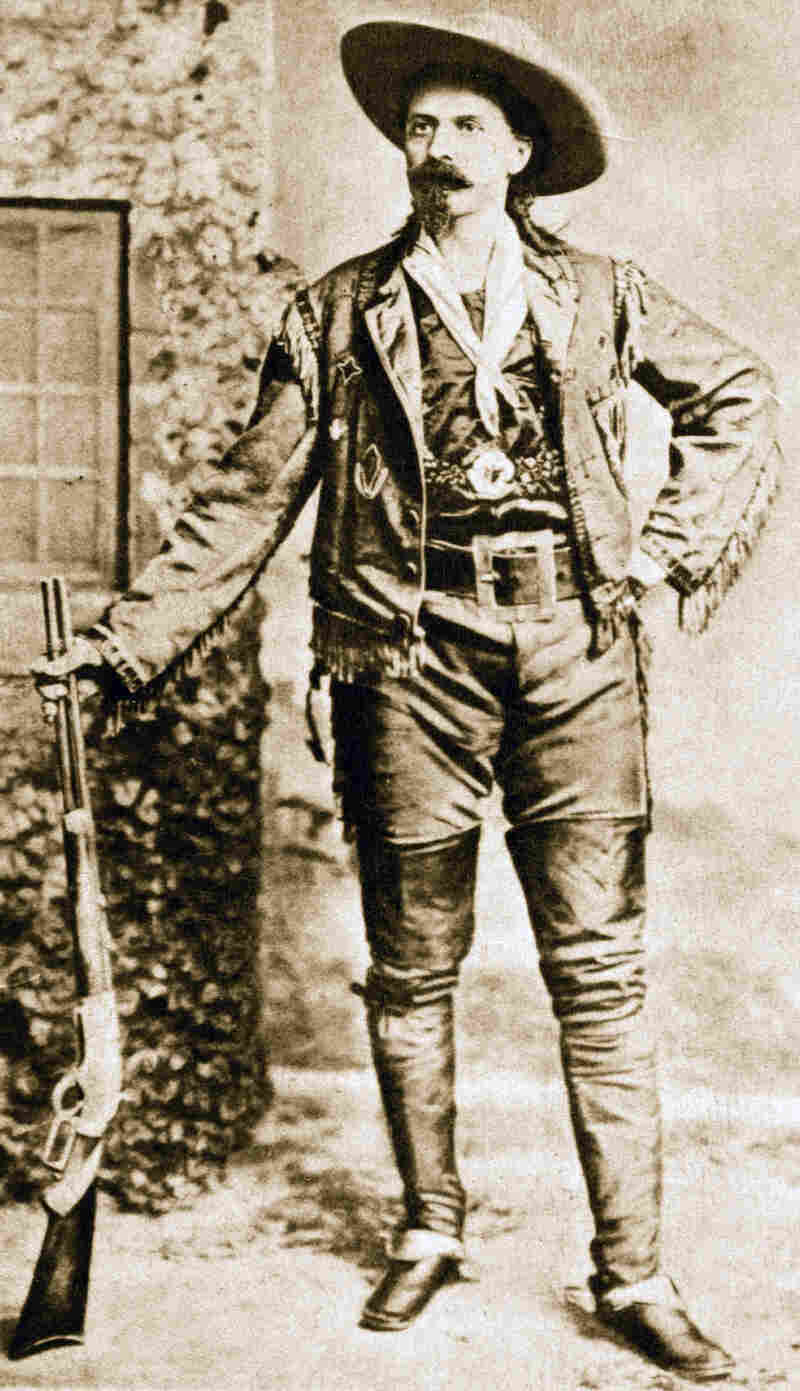 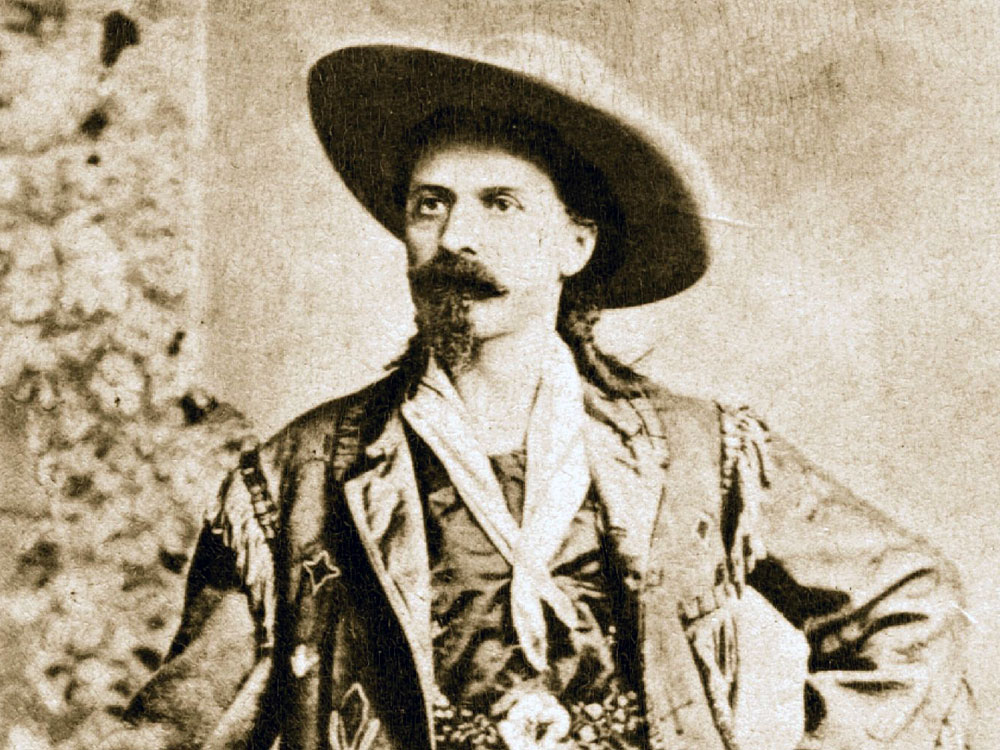 And Corbett says some riders remembered not getting paid because the Pony Express never made a profit. It operated for only about 19 months. The transcontinental telegraph put it out of business in short order.

'Thou Hast Run Thy Race'

These days, the U.S. Postal Service owns the Pony Express trademark, which may seem fitting, considering the current financial problems the agency is having.

Still, the U.S. Postal Service celebrates the history of the Pony Express, despite its short life.

"It's a legend, and I think deservedly so," says Postal Service historian Meg Ausman. "Because something is successful in its own time and not successful forever, I don't think that diminishes the importance of it at that time."

The Sacramento Bee newspaper certainly took the demise of Pony Express seriously. It published a front-page editorial in the fall of 1861 that offered these words of praise:

"Nothing that has blood and sinews was able to overcome your energy and ardor; but a senseless, soulless thing that eats not, sleeps not, tires not. ... Rest, then, in peace, for thou hast run thy race, thou hast followed thy course, thou hast done the work that was given thee to do."