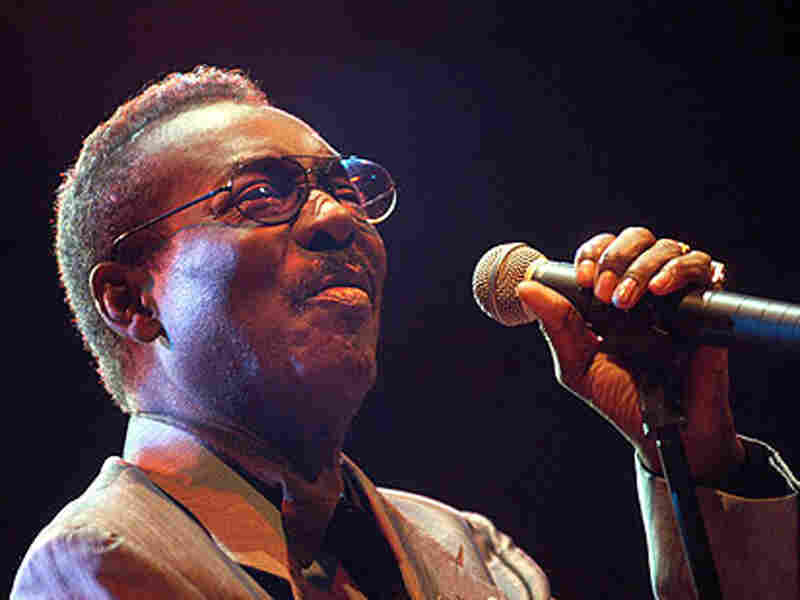 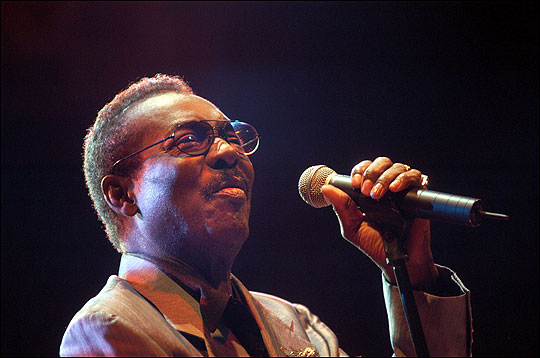 Wilson Pickett, photographed in February 2003 during an appearance at an international blues festival in Melbourne, Australia.

I Found A Love

If You Need Me

In The Midnight Hour

This box set is available only at Rhino.com.

Wilson Pickett was one of the male singers who defined 1960s soul, along with Sam Cooke, Marvin Gaye, Otis Redding and James Brown. Pickett was rough where Cooke and Gaye were smooth, urban where Redding was country, and lush where Brown was spare. Rhino Handmade has just released Funky Midnight Mover, a six-disc collection of Pickett's recordings for Atlantic, where he spent most of his career.

Pickett was born in 1941 in Alabama, the grandson of a preacher. But as a teenager, he fled the cotton fields to Detroit, where his father had moved earlier. He loved to sing and frequently went to Dayton, Ohio, where he performed a bit with a gospel group, The Violinaires.

When an up-and-coming Detroit vocal group, The Falcons, lost their lead singer, Pickett auditioned for them and they snapped him up. His familiarity with Dayton got The Falcons a club gig there, and they introduced "I Found a Love," a song Pickett had written with the group's bass singer, Willie Schofield. The response was so good that the group headed over to Cincinnati to record it at King Records, taking the Ohio Untouchables, the band that had been backing them. They were so powerful, they overloaded the microphones. But the song became a huge hit in early 1962.

It was a rich moment: Among the other Falcons were Eddie Floyd and Mack Rice, who became important singers and songwriters; and the leader of the Untouchables was guitarist Robert Ward, a blues master who left soon afterward for a solo career, leaving the rest of the band to eventually become the Ohio Players.

Pickett always had big ambitions, and he soon went solo, recording for a number of labels, most notably Lloyd Price's Double L. Jerry Wexler, at Atlantic Records, heard Pickett's version of "If You Need Me," and had Solomon Burke record it. Oddly, Atlantic made no effort to sign Pickett himself until mid-1964, and even then, his records didn't do very well.

It wasn't until May 1965 — when Wexler had the inspiration to try Pickett out in front of the Stax house band in Memphis — that they found the magic formula. Sitting in the studio with white guitarist Steve Cropper, Pickett found that the kid knew his gospel, and after fooling around for a while with something the Violinaires used to do, they made history, with the tune "In the Midnight Hour."

Writing songs with Cropper and two ex-Falcons, Rice and Floyd, both of whom were now working for Stax, Pickett scored two more smash hits, "634-5789" and "Ninety-Nine and a Half (Won't Do)," before record company politics dictated that he move to Fame Studios in Muscle Shoals, Ala., for the next sessions.

Pretty much all of the music from this period is excellent, with top-notch songwriting, playing and, of course, singing. The biggest hit is "Mustang Sally," the song Pickett is best remembered for; it was written by Rice, who also recorded the original version of it, and given its title by Aretha Franklin, another Detroiter, who played keyboards on Rice's version. Pickett, however, turned it into history as 1966 turned into 1967.

Then, in January of 1969, he did something totally unexpected.

He'd been hanging out with Fame Studios' new guitarist, a tall blond kid from Florida named Duane Allman, and somehow this guy had convinced him to listen to The Beatles. Even more remarkably, when "Hey Jude" was released early in 1969, it did well on both the soul and the pop charts. Allman was to become a valuable part of Pickett's next few sessions, and so were covers of rock hits: "Born to be Wild," "Hey Joe," Vanilla Fudge's arrangement of "You Keep Me Hangin' On," and even the Archies' "Sugar Sugar," which he allegedly recorded on a bet that he could turn anything into a hit. And he did.

By 1970, though, squabbling between Atlantic and various studios reached such a pitch that the company decided to record Pickett in the new hot place, Philadelphia, and packed him off to work with Kenny Gamble and Leon Huff. The change did him good: The album Wilson Pickett in Philadelphia contained two more smash hits, "Don't Let the Green Grass Fool You" and "Engine Number 9."

Those two songs were Pickett's last hits on Atlantic, though. He soon left for RCA, where he had moderate success. And then, in 1977, he signed with a label Atlantic distributed called Big Tree. Disco was what was happening, and time hadn't been kind to Pickett, who was now carrying a reputation as a dangerous person to be around. The sessions were mostly uninspired, and buried in his last album was a song, "Lay Me Like You Hate Me," that maybe told too much about what was going on in his life.

It was 1978, and Pickett just couldn't make it happen any longer. He continued to tour and, occasionally, to record, but his reputation for violence made club owners wary of booking him, and his records didn't sell. He was inducted into the Rock and Roll Hall of Fame in 1991, but soon found himself in jail for fatally injuring a pedestrian with his car. He went back on the road after his release, but health problems laid him low, and he died in 2006 of a heart attack.