Accessibility links
CD Collection Of NPR Funding Credits Is A 'True Gem' In celebration of NPR's upcoming 40th anniversary, the network released a CD boxed set of the network's entire history of funding credits. The staff of All Things Considered pities the fool who doesn't pick up this set on April 1. 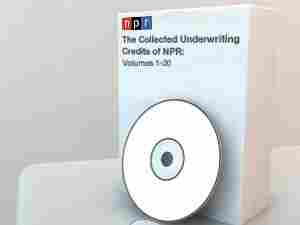 To kick off NPR's 40th anniversary celebration, the network Thursday released its long-awaited complete compendium of fundraising announcements. It's a boxed set spanning the entire history of NPR programming.

This year at the Public Media Underwriting Association competition, NPR took top honors for on-air sponsorship announcements. After winning the coveted "Fundy" award, NPR's top brass decided to finally give in to public demand and make these radio gems available.

The result is a comprehensive 20-disc collection that's like nothing else on the market.

A Must Hear For True NPR Fans

You might think that, as a loyal listener, you've heard all of NPR's funding credits. You would be wrong.

The Funding Announcements Collection includes entire discs of rarities and outtakes, like, "Support for NPR comes from Ala Neutral, encouraging apolitical thinking on public policy through indifference." And, "NPR programs are supported by the new movie Me and You and a Dog Named Boo."

At long last, connoisseurs of these tastefully discreet acknowledgments can hear them as they were originally intended. They've been remastered in high-definition 27-bit audio.

The voice is the legendary Arthur Di Fecanti. He's been reading the underwriting credits since May 3, 1971, when All Things Considered first went on the air.

Where Art And Corporate America Intersect

Hearing these fleeting announcements, you realize that there's a true art to them. The inflections are just so — the timing, utterly perfect. When necessary, Di Fecanti achieves a tone of Cronkite-ian severity. More often, he's the essence of a gentle soul, calling out the civic works of an agriculture conglomerate in soothing, comforting tones: "Support for NPR comes from Orean and Armstrong Seeds and Seedlings, planting ideas and artichokes. We bring the world to your plate."

The set represents a massive amount of work. Nothing in recent memory — not even the Neil Young archives project or the 31-disc set of Daniel Schorr Commentaries: The Dutch Years, 1940-1953 — comes close. But this isn't merely entertainment. The Funding Announcements Collection serves as an almost complete oral history of corporate America.

"NPR programs are supported by Bernard L. Madoff Investment Securities LLC. Watching over your investments so you don't have to."

This boxed set isn't perfect. There's inevitably some repetition over the years.

But hang in there. When you pay attention without the pesky distractions of the hard news and the yammering commentaries, you begin to appreciate these bits as the very bedrock of public radio. They slip past our consciousness almost unnoticed, but they're always there in the background — an ethereal, almost magical presence connecting us to the true spirit of the endeavor.