Accessibility links
Can States Afford The New Health Care Law? State officials like the amount of increased federal spending in the new health care law, but they are wary of how high their own costs will be and how much heavier their workload is about to become. 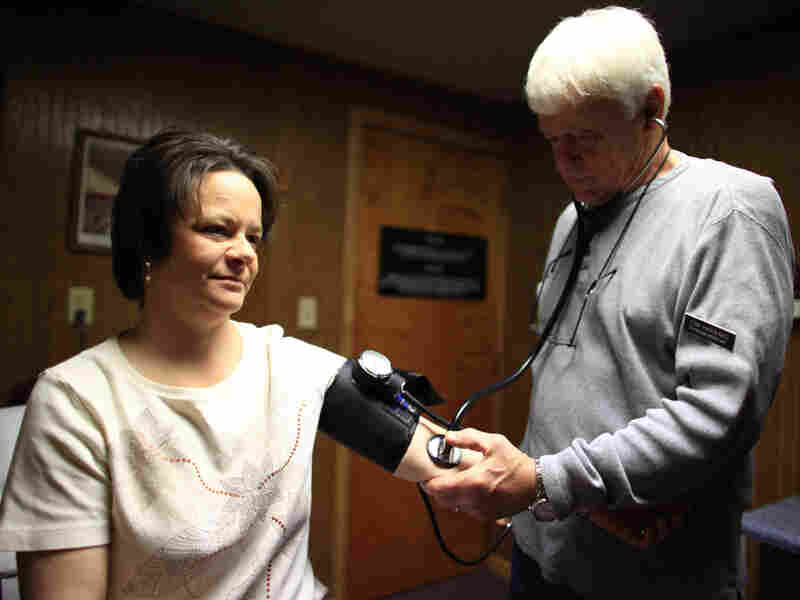 Physician assistant Tom Harward takes a patient's blood pressure in an exam room at the Belington Clinic, a community health center in Belington, W.Va. Across the U.S., state officials like the amount of increased federal spending in the new health care law, but they are wary of how high their own costs will be and how much heavier their workload is about to become. John Poole/NPR hide caption 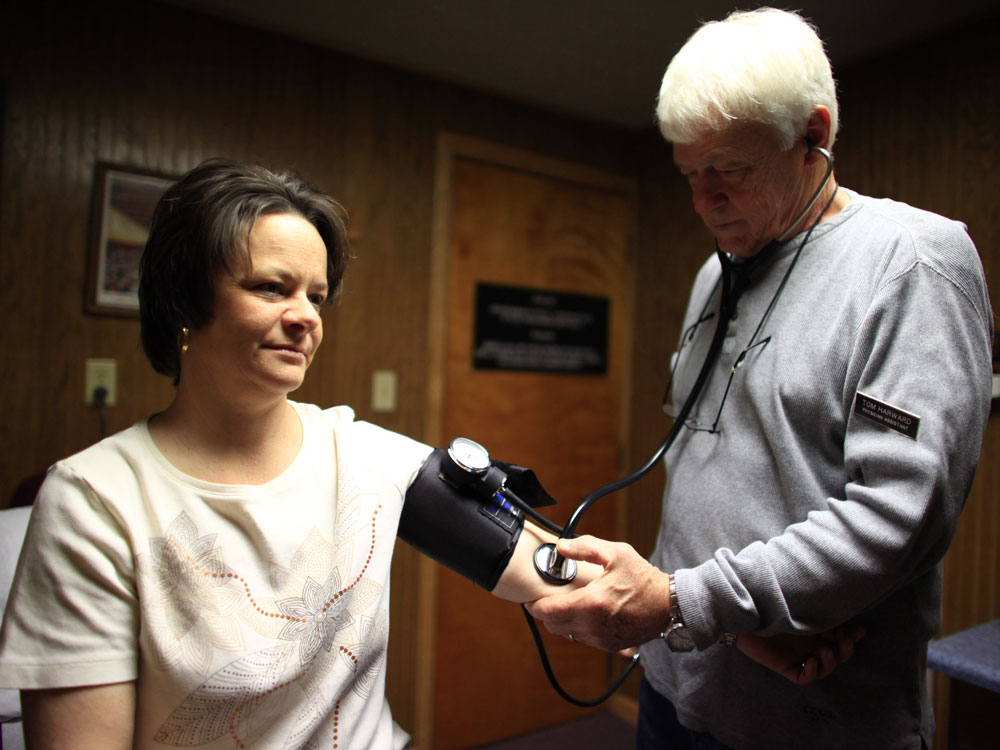 Physician assistant Tom Harward takes a patient's blood pressure in an exam room at the Belington Clinic, a community health center in Belington, W.Va. Across the U.S., state officials like the amount of increased federal spending in the new health care law, but they are wary of how high their own costs will be and how much heavier their workload is about to become.

Last month, Arizona did something no state had ever done — or is likely to ever do in the future. As part of its effort to close a $2.6 billion budget gap, Arizona became the first state to eliminate funding for its Children's Health Insurance Program. Lawmakers decided to make deep cuts in Medicaid as well, kicking 300,000 adults off the rolls as of January.

At least, that was the plan. But five days after Republican Gov. Jan Brewer signed it into law, President Obama signed the new health law. That had the effect of voiding Arizona's effort. The federal health care act bars states from lowering eligibility requirements for either CHIP or Medicaid over the next several years. Otherwise, they risk losing Medicaid funding altogether.

Because Arizona's cuts hadn't officially taken effect, state lawmakers now have to cancel them to comply with federal requirements. That will leave a $400 million hole in their new budget. All told, Arizona officials estimate the federal law will cost the state $11.6 billion over the next 10 years.

A Big Cost For States

Medicaid is already one of the largest expenses for states, and it has been growing rapidly.

Medicaid costs are shared by Washington and the states. The split varies by state, but on average the feds pay 55 percent, while states pay the rest.

Last year's stimulus law bumped the federal share up an additional 6 percent. That money runs out at the end of the year, but President Obama's budget would extend it for six months.

The new health law sounds even more generous. Currently, Medicaid eligibility is determined state by state, with each taking slightly different factors into account. The new law makes it simple: Everyone with income under 133 percent of the poverty line qualifies. The feds will pick up 100 percent of the tab for three years for people who become eligible under the new rules, with that share slowly decreasing to 90 percent by 2020.

But there's a catch. States will still have to pay 45 percent or so of the cost for each person who signs up who would have been eligible under the old rules. And that creates an additional administrative headache for states in determining the set of rules under which each person qualifies.

Brewer calls that "financially devastating." She signed a bill Thursday that gives her the authority to sue the federal government over the law, even though the state's attorney general has refused to do so.

Many other states — nearly all of which are facing budget shortfalls — are similarly concerned about how much the health law will end up costing them. States that have traditionally offered lower levels of coverage, such as Arizona, will no longer have the option of cutting health spending much in tough times.

And, because states will operate major portions of the federal expansion, they face other challenges. California predicts that the cost of administering the new programs alone will run the state $2 billion to $3 billion.

"There's no way, in my view, that this is not going to cost states," says Scott Pattison, executive director of the National Association of State Budget Officers.

Putting The Pieces Together

State-run exchanges are one of the cornerstones of the new law. These will be marketplaces where individuals and small businesses sign up for private insurance plans. The idea is that they'll work like travel Web sites such as Orbitz and Expedia, giving individuals and human resource managers their pick among several competing plans.

The exchanges also will figure out whether an individual, even though she may be applying for private coverage, actually meets the requirements for CHIP or Medicaid. That means states need to get often outmoded database systems talking to each other.

States that have tried to synchronize applications across various assistance programs have found it rough going, even on a much smaller scale, says Jeff Smith, a health consultant with the Lewin Group in Virginia. Under the health law, states will collectively process income and eligibility information for up to 30 million families, he says.

"It's very, very difficult to bring all the disparate pieces into one system and make them work together," he says. "I don't think states fully understand the magnitude of what's involved here."

It can be done. After passing a similar individual-mandate law in 2006, Massachusetts got its exchange up and running within six months. Under the federal law, other states have until 2014. (Utah is the only other state with an existing exchange.)

But Massachusetts started out with many advantages. Its uninsured population was relatively small and the state boasts the nation's largest number of physicians per capita.

States that have already expanded coverage in recent years, including Massachusetts and Maine, have learned how to reach out to working populations and negotiate with private insurers.

Not all states have that experience. States such as Arizona and Alabama, which historically haven't provided broad coverage, have reason to worry about how they're going to bring their administrative and health system capacity up to speed — and how they're going to pay for it.

"If you've been running a fairly basic program and you imagine a major influx of people coming into Medicaid, you're wondering who is going to provide care to those people and how are we even going to sign them up," says Alan Weil, executive director of the National Academy for State Health Policy. "The magnitude of the task is definitely greater in the states that have not taken those steps, to learn a lot of lessons about expanding coverage."

Leaving aside constitutional challenges brought by 14 state attorneys general, this is the real fault line dividing opinion about the new federal law among states. Some states are confident they have the ability and expertise to meet its challenges, while others remain wary. Some are having to shift gears entirely, from making big program cuts to preparing for vast expansions.

Cindy Mann, who oversees Medicaid and CHIP for the federal government, recognizes that states will have additional costs under the law, but she points out that states will receive help on implementing — and paying for — their new coverage responsibilities. The feds will not only pick up the tab for newly eligible Medicaid recipients but devote more dollars to CHIP as well. "This helps states avoid other costs they would bear if the Medicaid program wasn't there," Mann says, such as underwriting care for the uninsured at community health centers.

But Carol Steckel, Alabama's Medicaid commissioner, says her state can barely afford its share of Medicaid costs now. She predicts the new law will bring 400,000 more people into her state's Medicaid system by 2014 — doubling its size. That means even greater costs for the state down the road, despite increased federal subsidies for Medicaid.

"I'm going through my mourning period of how much work there's going to be," she says. "We're for bleepin' sure going to have to think outside the box."