Accessibility links
Playing Heavy Metal In Baghdad: Acrassicauda The Iraqi heavy metal band Acrassicauda formed in a basement in Baghdad under the Saddam Hussein regime — not exactly the easiest place to play thrash metal. The group, featured in the 2007 documentary Heavy Metal in Baghdad, just released its first EP, called Only the Dead See the End of the War. 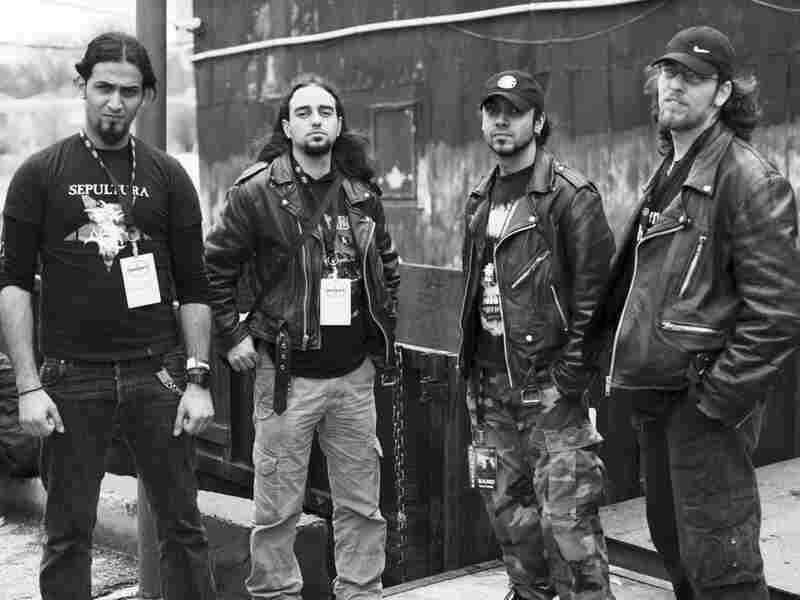 After arriving in the United States, the Iraqi heavy metal band Acrassicauda got to have a backstage heart-to-heart with Metallica. Lead singer James Hetfield donated a guitar to the group. Courtesy Acrassicauda hide caption 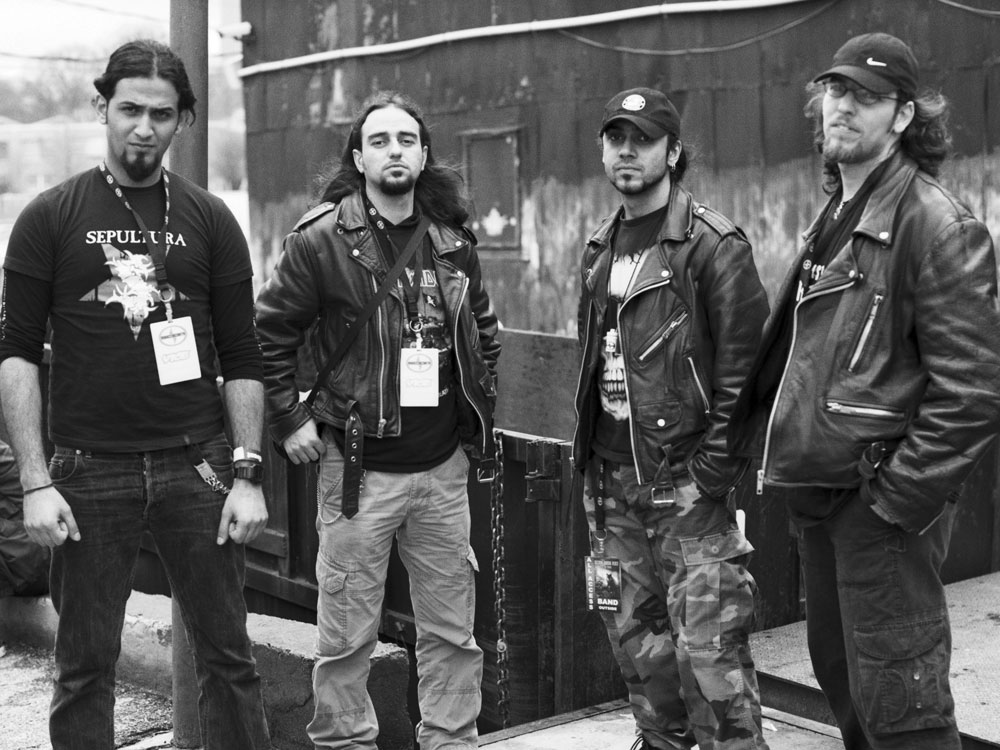 After arriving in the United States, the Iraqi heavy metal band Acrassicauda got to have a backstage heart-to-heart with Metallica. Lead singer James Hetfield donated a guitar to the group.

The Iraqi heavy metal band Acrassicauda formed in a basement in Baghdad under the Saddam Hussein regime — not exactly the easiest place to play thrash metal. But after the U.S. invasion, things got even tougher. The four members of the group — lead vocalist Faisal Talal, guitarist Tony Aziz, bassist Firas Al-Lateef and drummer Marwan Riyadh — received death threats from Islamic insurgents, and their practice space was bombed.

"It was already, like, dangerous ... to play such kind of music [before the invasion]. I wouldn't say forbidden, but it was just like too eccentric," Riyadh explains to Terry Gross. "Of course, after the invasion, it became a matter of life and death, and is it even really worth it? Is it even worth it that you're playing music and you're threatening — you're jeopardizing your life and your family, too, with that?"

The musicians received international attention after the release of the 2007 documentary Heavy Metal in Baghdad, filmed by Suroosh Alvi. The film follows the members of Acrassicauda — which means black scorpion in Latin — after they decided to leave Iraq and cross the border into Syria.

Lead vocalist Talal, who joined Riyadh and Alvi in studio to discuss the documentary, says the band members had to flee the country where they grew up.

"The general idea of us leaving Iraq is not like because we wanted that so desperately. I mean, most of people could miss it or misunderstand it, but we've been forced to leave," he says. "And leaving all this behind was so hard. It was so depressing for us."

From Syria, they made their way to way to Turkey, where they spent a year and a half. "Turkey was the one country that you could fly to as an Iraqi without a visa and they would accept you," explains Talal. "That was the one border that was kind of open at that time. And even that had a window that was going to close. So we hustled."

The metal community around the world worked to raise funds to get the band members out of Syria and into Turkey. Eventually, they made their way from Turkey to the United States, where they live now.

"We couldn't stay like in exile forever," says Riyadh. "You need to understand this because refugee being — refugee is not a status. It's just like, you know, form. ... It's part of a process, you know? And that's why it ... wasn't the destination. So we had to go to someplace where we can perform our music, where we can play our music, it didn't matter where. Just like, you know, we had to find a solution."

After arriving in the United States, the band members lived separately — in New York, Michigan and New Jersey — and made money however they could. They recently reunited and released their first EP, called Only the Dead See the End of the War.

This interview was originally broadcast on March 17, 2009