Who To Root For And Against At Final Four Time

Who To Root For And Against At Final Four Time

The NCAA men's Final Four creates its own drama, but on the eve of Saturday's semi-final games, here are some talking points — both serious and whimsical — to consider.

Why Root For Butler?

1. They've got the best "old school" gym: Hinkle Fieldhouse, built in 1928, was the largest basketball arena in the U.S. for several decades — with or without actual peach baskets. If you've seen the film Hoosiers, you've seen Hinkle in all its glory. 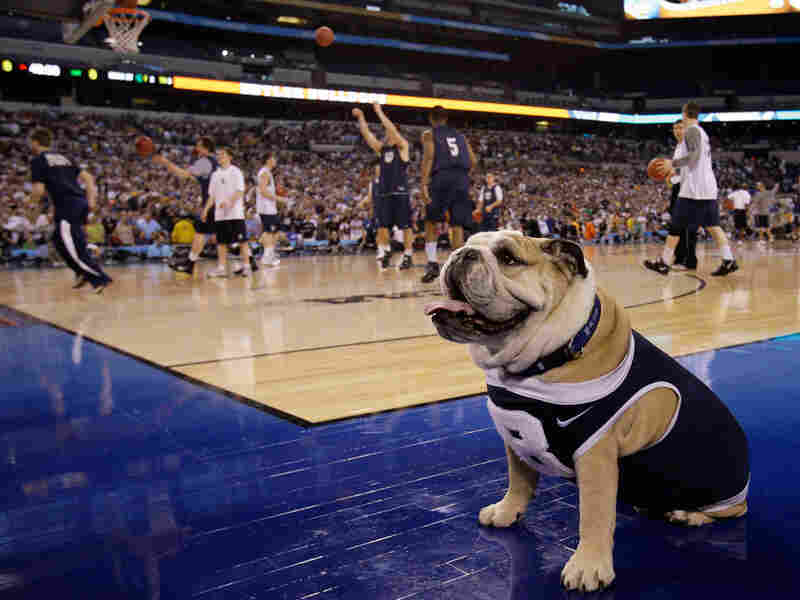 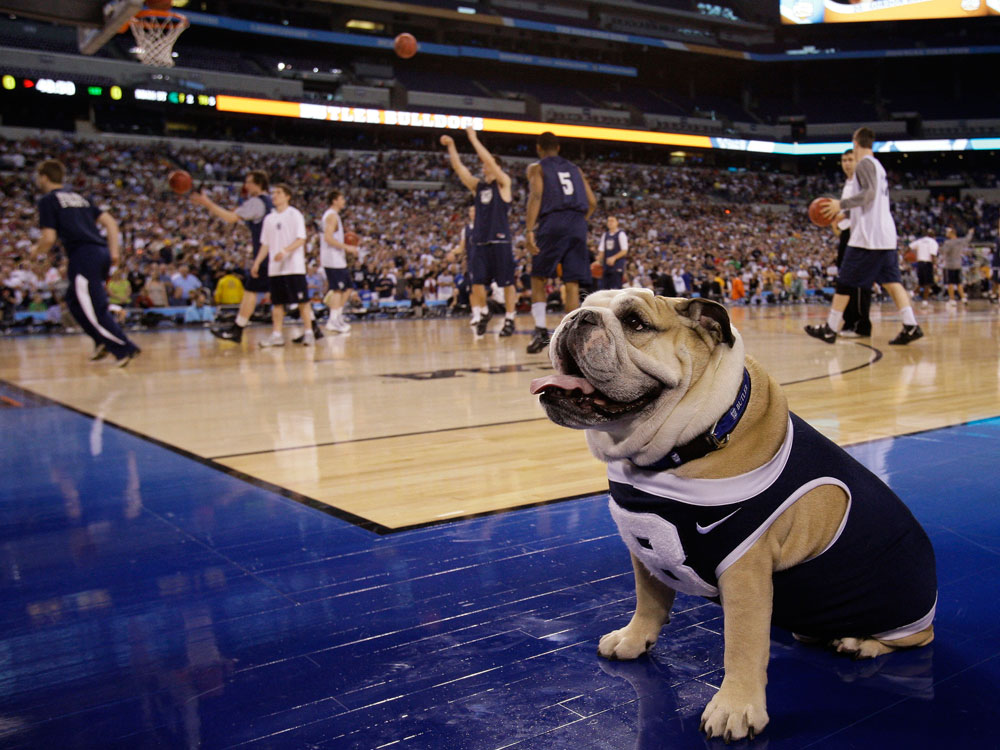 2. They're the most likable unlikely story: This time of year, the cry goes up both far and near for Underdog — and Butler's Bulldogs fill that bill. This Final Four appearance is built on a steady climb to the top, but they're still representing the Horizon League, after all.

3. Back home again in Indiana: Sure, other teams have won NCAA titles in their backyard — including Michigan State in 2000 — but Butler will be playing less than six miles from home. That's just eerie.

4. Nobody else has them winning: When Kansas and Kentucky fell, a lot of office pools were thrown into chaos. Still, some folks out there had undervalued No. 1 seed Duke winning; some put their faith in old reliable Michigan State; and some saw West Virginia's Big East run as an omen. Who had Butler going the distance? Really? No offense, but I don't believe you, unless you happen to be a Butler fan. And even then, I'm double checking.

Bonus reason from old pal Dave of Naples, Fla.: "Headline writers everywhere will be able to write 'Butler Did It.' " Yeah, Dave. Already on it.

Why Root Against Butler?

1. They're not really the underdog: This program is rock solid, with three Sweet Sixteen appearances in the past eight years. They won 32 games this year and have now won 22 in a row.

2. Indianapolis already has Peyton Manning: Isn't that enough All-American boy (and media overexposure) for one medium-sized heartland city? I'm not even counting the Indy 500 or David Letterman.

3. Indiana is already a major player in the NCGA: That would be the National Corn Growers Association, whose members will be responsible for planting the lion's share of an estimated 88.8 million acres of field corn in 2010. That's a lot of corn.

4. OK, I give up: There aren't a lot of good reasons to root against Butler unless you're a Dukie, a Mountaineer or a friend of Sparty.

Bonus reason from old pal Popeye of Greensboro, N.C.: "It's like rooting for Bambi or Lassie ... a little too sugary."

Why Root For Duke?

1. In a letter, Coach K: John Wooden's achievements at UCLA are untouchable, but Mike Krzyzewski is arguably No. 2. Here are pertinent stats: 11 Final Four appearances (including five straight from 1988-92); 17 Final Four games coached; 10 Final Four wins; 3 national championships. A fourth would tie him with Kentucky legend Adolph Rupp and put him ahead of North Carolina's Dean Smith and Indiana's Bob Knight. 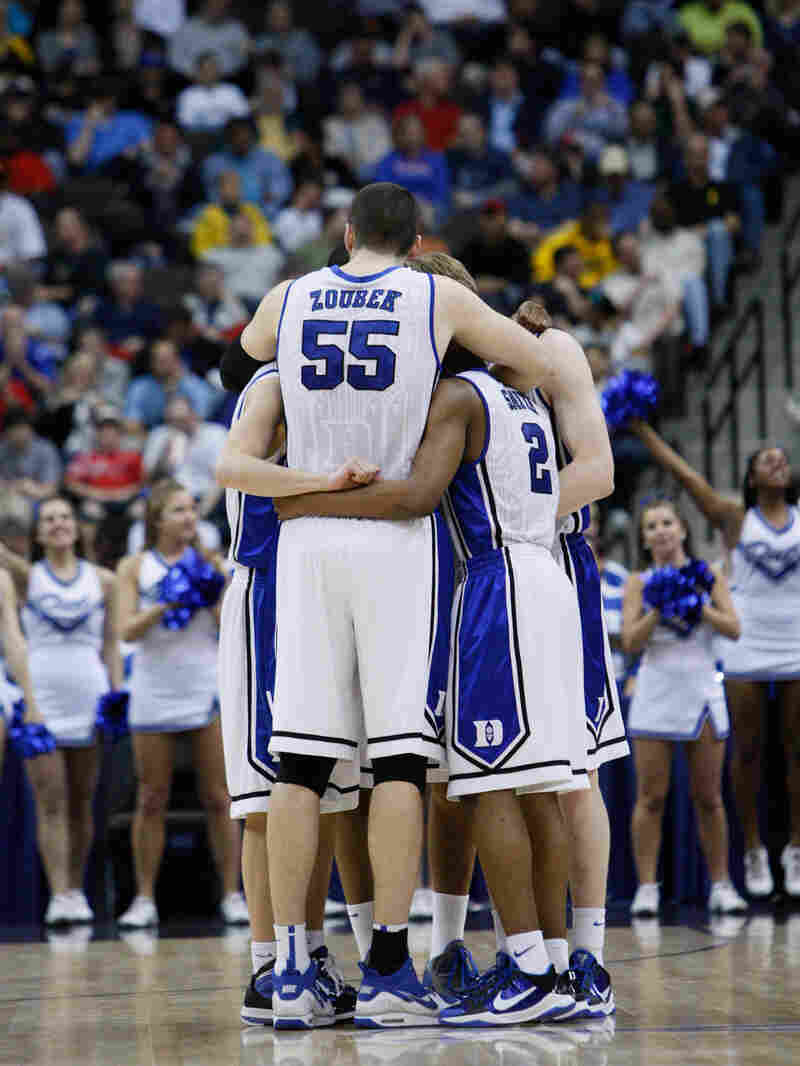 2. It could be his last shot: It took Duke six years to return to the Final Four, and Krzyzewski avoids recruiting the kind of "one and done" NBA-bound players who have dominated the college game in recent years. Good as he is, he turned 63 in February. He might not get back.

3. No, THEY have the best gym: Cameron Indoor Stadium began as a sketch on a matchbook cover in 1935. It seats fewer than 10,000, making it one of the smaller "big team" sites around. And largely because of the student rooters known as the Cameron Crazies, it's quite the college atmosphere.

4. They're all talk, in a good way: Duke grads who have been in your ear all season over the airwaves include Jay Bilas, Mike Gminski, Jim Spanarkel, Jay Williams and Seth Davis.

Bonus reason from nephew Dane, of Madison, Wis., who married into the Duke tradition: "Duke has talented kids who graduate and they play in a high-school gym."

Why Root Against Duke?

1. All the above reasons: I am aware that everything I just wrote in the "for" section makes many, many basketball fans grind their teeth. Some of that sentiment is envy, and envy comes with the territory. But the visceral "anybody but Duke" reaction certainly seems "valid for you," as one of my psychologist friends likes to say.

2. Variety is the spice of life: Well, the Blue Devils have won their fair share and then some, and just last year ACC archrival North Carolina took home the big trophy. And if you include North Carolina State, roughly 1 in 7 national basketball championships has gone back to Tobacco Road since the whole thing started in 1939. Time for a new sheriff in town?

3.They win ugly: I saw Grant Hill. I saw Johnny Dawkins. I saw Christian Laettner. I saw Bobby Hurley. And none of these guys are much like any of those guys. These guys are gritty, not pretty. And sometimes that's just not fun to watch.

4. Next Year, the NIT: Sure, Carolina won it all last year. Then they lost most of their great players to the NBA. Next stop, National Invitational Tournament. Could the same happen to the Blue Devils? Why risk it?

Bonus reason from honorary big sister Jennifer, of Columbus, Ohio: "The reason I enjoy this tournament is that I root for the underdog. Duke is boring because Duke is always there."

Why Root For Michigan State? 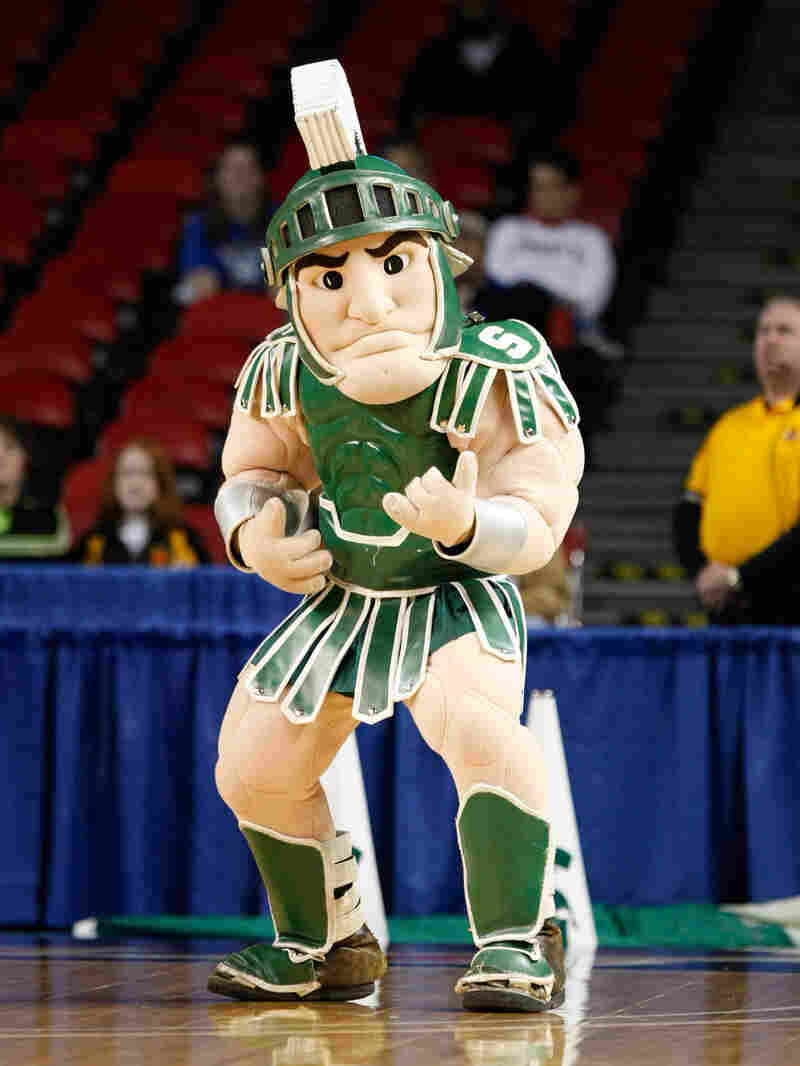 Sparty — the Michigan State mascot — is all puffed up and ready to go. Ed Reinke/AP hide caption

1. They're the real underdog: These Spartans might have played in last year's national championship game, but key players have since moved on. Now star guard Kalin Lucas is out with a torn Achilles tendon, and several teammates are playing hurt. And remember, they're a No. 5 seed ... just like Butler ... and barely survived Rounds 1, 2 and 3.

2. Persistence makes perfect: Tom Izzo's teams aren't always the bridesmaid ... they did win with Mateen Cleaves in 2000 ... but this is the sixth time since 1999 that they've made the Final Four. That's admirable. Unless you're a hater. Anti-Dukies, I'm looking at you.

4. They wear green: There's a lot of blue in this Final Four field. Duke Blue. Butler Blue. West Virginia Blue and Gold. Blue is the preferred color of the corporate world. Green is the color of nature. Think IBM vs. Ben and Jerry's. Who you gonna root for in that one? And green is said to have healing power, which the Spartans could use.

Bonus reason from honorary kid sister Stacey, of Cleveland: "Isn't it enough that I went to Michigan State?"

Why Root Against Michigan State?

1. They're the Big 10's sacrificial lamb: This spot in the Final Four could have gone to Purdue, which lost standout Robbie Hummell. Or to Ohio State, which forgot to bring a big man to play Tennessee. Or even to Wisconsin, which couldn't quite match up against Cornell. I say again, against CORNELL. And any of those teams would have lost to Duke. Count on it.

2.They're the wrong underdog: If this Michigan State team actually does win the national championship — let's be honest, here — it's really not that great a story unless you're from Spartan land. Butler is a great story. West Virginia is a great story. A Duke win would be dusted with history, as Coach K joins Adolph freaking Rupp. A Michigan State win would give Izzo a second national title — and that's not nothing — but it falls something short of a ticker-tape parade.

3. We could avoid the 'Poor Rust Belt' storyline: I'm from Cleveland. I do not believe that if the Browns or the Indians or the Cleveland State Vikings or LeBron James and the Cavaliers win a title it will redeem my foreclosed-upon hometown. Sports are a distraction, not a purpose in life.

4. Sparty is a totally random mascot: What in the world does a warrior culture from a city-state dating to 650 B.C. have to do with a land-grant university in the Midwest? Nothing. Turns out the name was picked by a sportswriter in the 1920s because the newly named Michigan State (formerly Michigan Agricultural College) needed a better nickname than "Michigan Staters." Hoo-boy.

Bonus reason from all my Ohio friends and relatives: "Michigan State is not Ohio State." True ... the Spartans actually play ABOVE their potential.

Why Root For West Virginia? 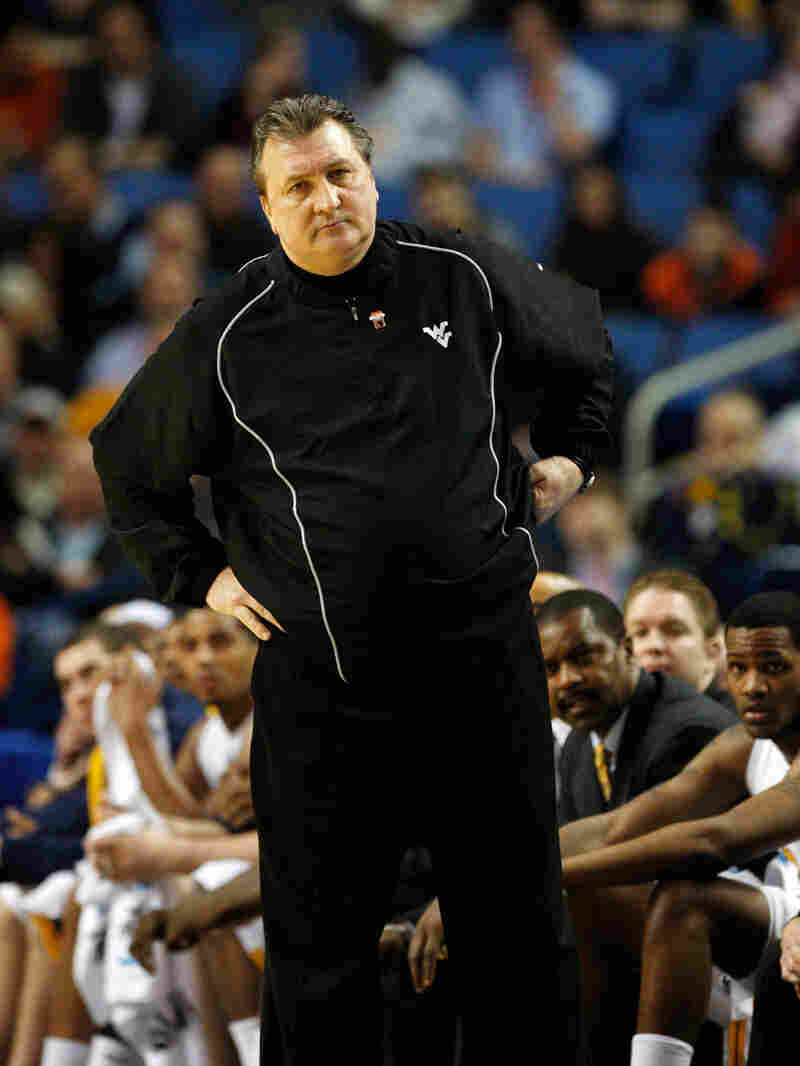 If you love him, you think of him as Huggy Bear. But many fans aren't fond of West Virginia coach Bob Huggins. David Duprey/AP hide caption

1. You can go home again: Bob Huggins, born in Morgantown, played point guard for West Virginia in the late 1970s. He went on to great success at Cincinnati. Now, after a heart attack, he's back at West Virginia and taking the program to new heights.

2. Joe Mazzulla, on point: Hands down the best story in the tournament. Mazzulla was enjoying serious bench time and awaiting surgery for a congenital shoulder problem when starting point guard Daryl "Truck" Bryant broke his foot in practice. Mazzulla responded with a career high 17 points against Kentucky to send the Mountaineers to the Final Four.

3. The Jerry West connection: The last time West Virginia was in a Final Four, they were led by Jerry West, the greatest player in West Virginia history and a literal NBA icon (his silhouette is on the league's logo). West's son, Jonnie, is now a backup player for the Mountaineers.

4. The Mountaineer tradition: The Mountaineer is a distinctive, precisely conceived embodiment of West Virginia's frontier history, complete with rifle and fur cap. This year's Mountaineer is Rebecca Durst. As far as we know, she is not following one custom of mascots past: growing a beard.

Bonus reason from blogger Austin Burton of the online mag Dime: "At every turn, justified or not, West Virginia feels slighted and has something to prove."

Why Root Against West Virginia?

1. You're unwilling to forgive the Thuggins days: Before he was a big, burly, potentially lovable middle-aged West Virginia mentor, Bob Huggins was a younger, type-triple-A, glowering sideline presence whose Cincinnati teams were criticized for rough play and academic underachievement. Some fans haven't forgotten.

2. The Big East's rep is too big: The Mountaineers turn out to be the sole survivors of a superconference that severely underperformed in this year's NCAA tournament. Maybe ... I'm just saying, maybe ... West Virginia didn't deserve the No. 2 seed it got. Do seeds matter? Different discussion.

3. One too many Butlers: So, let's imagine the championship game pits West Virginia against Butler. But one of West Virginia's star players is named DaSean Butler. I'm already confused.

4. West Virginia is just ... different: A recent study looked at how states match up with the national average on race, age, income and 18 other factors. The state that was least "average" was West Virginia. At first glance that's endearing. But I sense subversion afoot. Get out the pitchforks!

Bonus reason from colleague Bill, a Georgia grad: "Training at altitude gives them an unfair advantage."

Todd Holzman is senior supervising editor for NPR Digital News. He had Kansas winning the tournament, so what could he possibly know?