Accessibility links
Marines Tap Social Sciences In Afghan War Effort As part of the U.S. counterinsurgency strategy in Afghanistan, the military is using cultural and human behavior research gathered by a Pentagon-run program called Human Terrain System. Some anthropologists argue that it is unethical for scholars in their discipline to provide information for military goals. 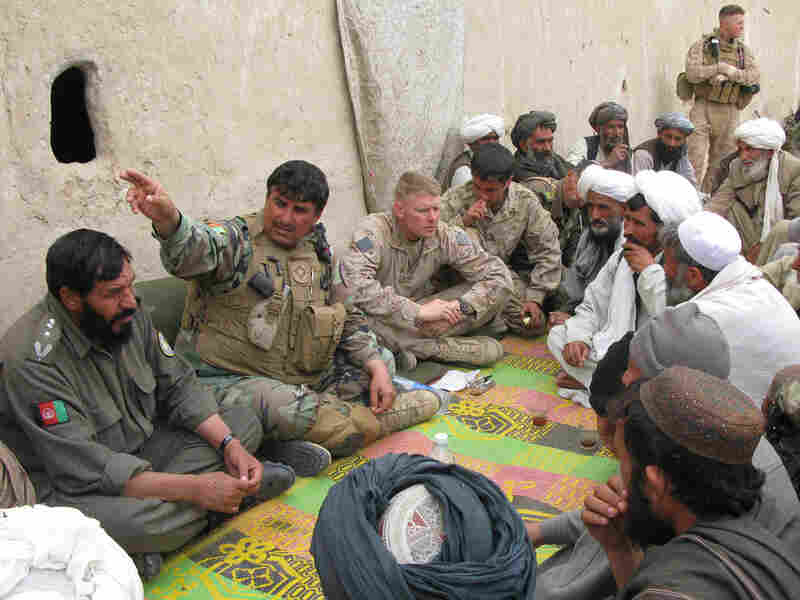 U.S. Marines and Afghan army commanders meet with villagers in Marjah, in Helmand province. The Marines are using social scientists to advise them on how to interact with local people as part of the U.S. counterinsurgency strategy. Corey Flintoff/NPR hide caption 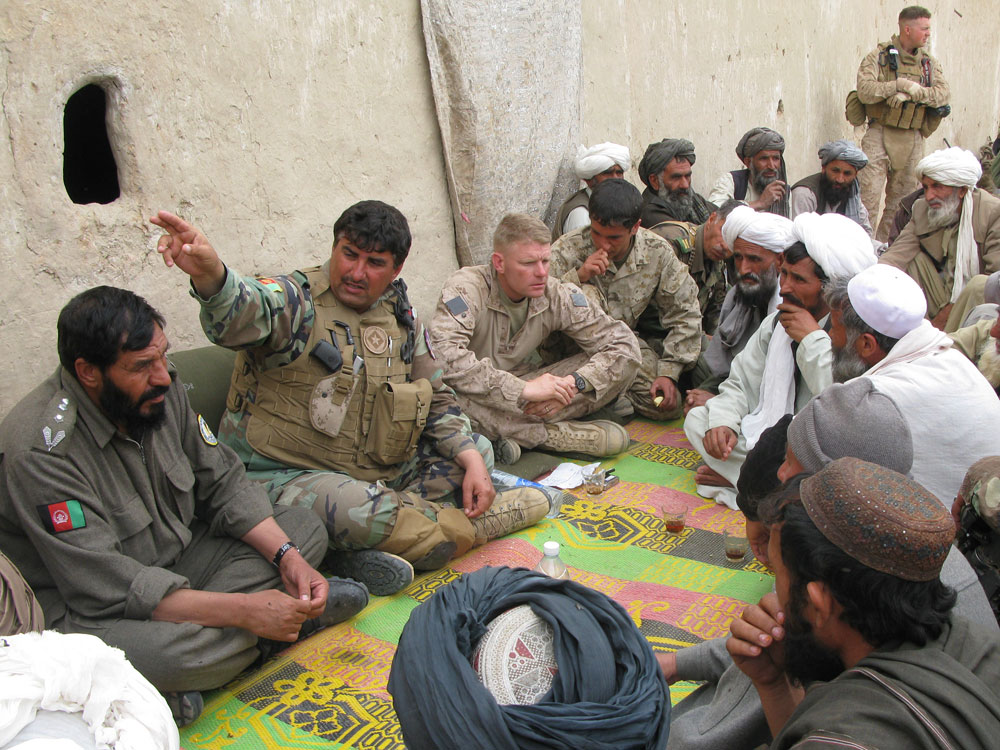 U.S. Marines and Afghan army commanders meet with villagers in Marjah, in Helmand province. The Marines are using social scientists to advise them on how to interact with local people as part of the U.S. counterinsurgency strategy.

U.S. forces in Afghanistan are using a controversial tool in their efforts to hold the ground recently captured from the Taliban. It is the work of civilian anthropologists and other social science researchers, who advise military commanders on how to win the hearts and minds of local people.

The practice is highly debated among scientists at home, who say there are serious ethical problems with using social science techniques to further military objectives.

The project is called Human Terrain System, or HTS, and it is run by the Department of Defense. It uses researchers such as Kristin Post, who does analysis for U.S. Marine units in Marjah, a farming region in Helmand province that was seized from the Taliban in February.

Post stood out at a recent meeting that Marine and Afghan army commanders held with local farmers and shopkeepers. Tall and fair, the 36-year-old researcher was dressed in an Afghan headscarf and Marine uniform, the only woman in the group.

Post kept an eye out for possible cultural conflicts. When the Marine commander suggested holding another meeting with elders at 10 on a Friday morning, Post politely reminded him that his plan would interfere with prayer time for the Muslim farmers.

It's impossible to be embedded in American military units in Afghanistan, collecting information about local villages, and not be complicit with actions that result in the death or imprisonment of some of the people you talk to.

Hugh Gusterson, board member of the American Anthropological Association

Post said she spent much of her time interviewing local farm families, trying to get a sense of the people and their relationships to one another.

"Already, you start to get a picture of how things work — who knows who, who doesn't know who," she said.

Social Divisions Under The Surface

The farmers of Marjah live in clusters of mud-walled compounds, where they grow opium poppies and wheat. Although it might seem to outsiders that they would know their neighbors, Post said there are divisions in the community.

That kind of information is golden to Marine commanders who are engaged in a counterinsurgency strategy known as "clear, hold and build."

In order to hold the ground they have cleared, the Marines want to show that they can provide lasting benefits to the people by improving local education, health care and the economy.

The Marines need to identify people they can work with, without tripping over the network of alliances and rivalries that make up the community.

But not everyone agrees that civilian social scientists can or should be providing that kind of information to the military.

Hugh Gusterson, a member of the executive board of the American Anthropological Association, says the Human Terrain System program violates his group's ethics code.

Gusterson, a professor at George Mason University, says that social scientists working for the military violate a key precept of their discipline: that anthropologists should "do no harm" to those they study.

"It's impossible to be embedded in American military units in Afghanistan, collecting information about local villages, and not be complicit with actions that result in the death or imprisonment of some of the people you talk to," Gusterson said.

What I see, and what I would think anybody would judge to be true, is that we're using social science research methods to save Afghan lives and military lives. And I can't see anything unethical about that.

Kristin Post, a civilian researcher working with Marines in Afghanistan

On the one hand, he says, the information may lead to some people being arrested as insurgents or insurgent sympathizers. Another possibility is that "just by being seen talking to people in an American military uniform, people could be opening themselves up to reprisals," Gusterson added.

The association's ethics code also specifies that anthropologists should not talk to people without their free and informed consent.

"If you show up in an American military uniform, surrounded by people with machine guns, asking if people would like to have a chat with you, it makes it very difficult for them to give truly free consent," Gusterson said.

Steve Fondacaro, a retired Army colonel, is project manager for the Human Terrain System. He says his researchers are trained to let interviewees know that they are not required to answer questions.

"The first thing is that the villager knows he doesn't have to speak to anybody," Fondacaro said. "None of the villagers are coerced by the U.S. military in any way, to do anything, unless they're shooting at us."

Offering a cultural observation of his own, Fondacaro says that Afghan "villagers have been dealing with armed men for decades."

He says their familiarity with a gun culture means that many Afghans may not be intimidated by the presence of the U.S. military. "Their individual position on that may be different from yours," he said. "For us to look at it in terms of how we would react may not be accurate."

Different Standards In A War Zone

In a larger sense, Fondacaro says the critics of the program are setting standards that are impossible to meet in a war zone.

Fondacaro says his teams aren't going to give up, because they see it as more harmful to deny the military a means of obtaining important information.

In Marjah, Post said she thought she might face ethical questions while doing her job, but she hasn't found that to be the case.

"What I see, and what I would think anybody would judge to be true, is that we're using social science research methods to save Afghan lives and military lives. And I can't see anything unethical about that," she said.

Critics like Gusterson say the Human Terrain System has never produced evidence to back up its claims that the project is significantly reducing casualties.

Fondacaro acknowledges that such a study has not yet been done, but he says individual commanders have strongly endorsed the program.

Ethics aside, Gusterson questions whether the Human Terrain System can collect information of practical value, given the limitations on its researchers. He calls what they do "drive-by research."

He notes that anthropologists usually learn the languages of the people they study, and often spend months or years living among them in an effort to understand their points of view.

In the Human Terrain System, "you have people who almost never have the local language skills, they're operating through interpreters, they don't have experience in the region, and they're not embedded with the locals — they're embedded with the U.S. military," he says.

Gusterson says he would have no objection if the military wants to train its own personnel to do what is essentially a military intelligence job. "But because the program threatens the ethical integrity of anthropology, we would like them to close down the recruitment of civilian anthropologists," he said.

Gusterson says a group he helped co-found, the Network of Concerned Anthropologists, has obtained hundreds of signatures of anthropologists on a petition asking Congress to remove funding from the Human Terrain System project and shut it down.

The list, he says, includes six of the nine living presidents of the American Anthropological Association and the chairs of many university anthropology departments around the country.