Accessibility links
Measles Resurgence Tied To Parents' Vaccine Fears Many parents who don't get their kids vaccinated worry that the shots — particularly the one for measles, mumps and rubella — cause autism, though no scientific link has been found. The highly contagious virus had been eliminated from the U.S. but is coming in from elsewhere — and officials say unvaccinated children hasten its spread. 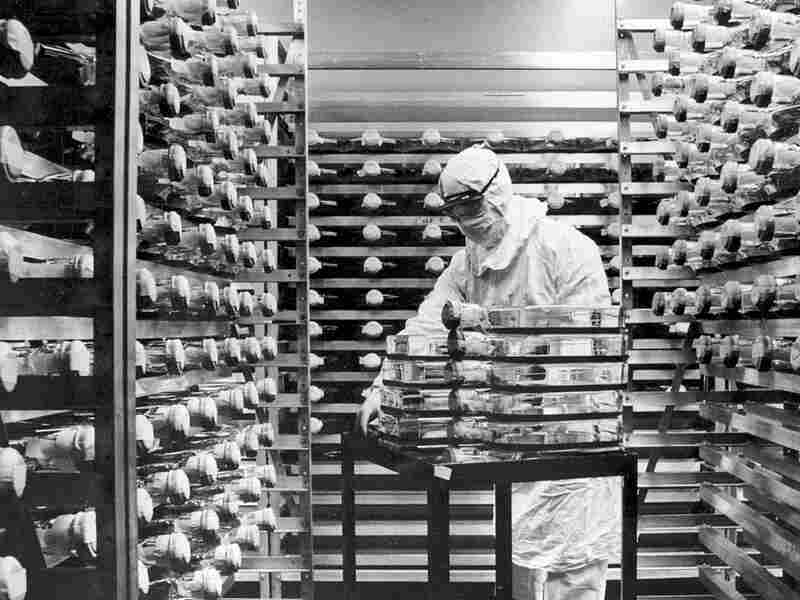 A technician stores trays of cell tissue in an incubator at the virus laboratories of Chas. Pfizer & Co., Inc., in 1963. Widespread use of the measles vaccine in the U.S. began in the late 1960s and led to the near-eradication of the illness in the country. AP Photo hide caption 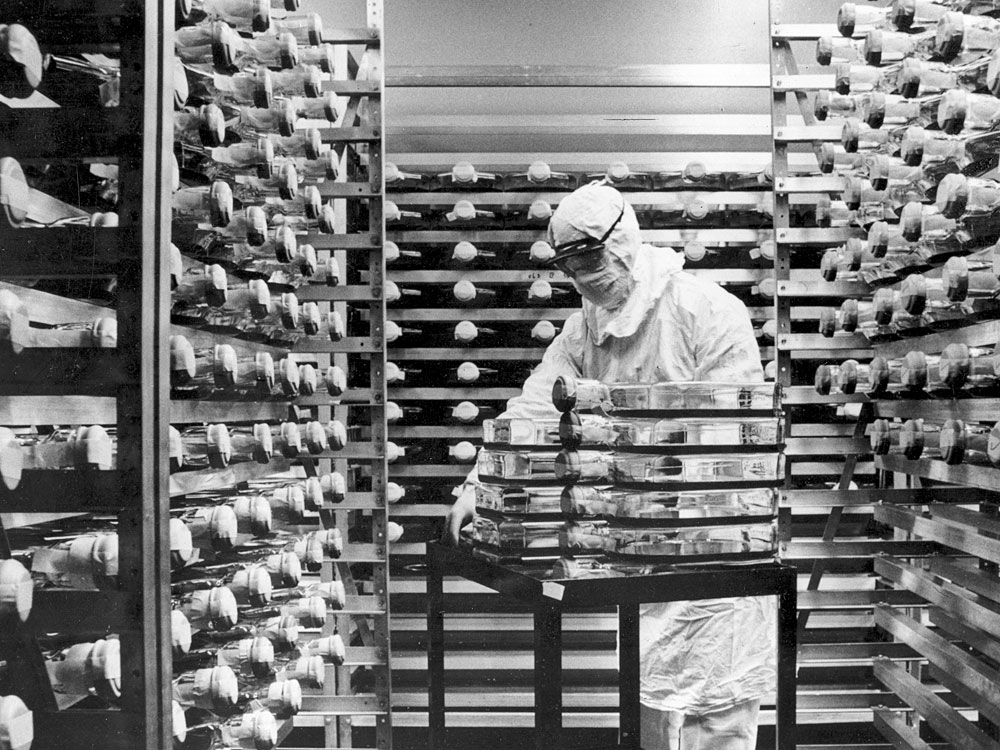 A technician stores trays of cell tissue in an incubator at the virus laboratories of Chas. Pfizer & Co., Inc., in 1963. Widespread use of the measles vaccine in the U.S. began in the late 1960s and led to the near-eradication of the illness in the country.

A generation ago, up to 4 million U.S. children got measles every year. Hundreds died, and thousands were left with permanent brain damage. Thanks to vaccination, those days are over, at least in this hemisphere. But health officials worry about the growing number of children who are vulnerable when somebody brings measles from another part of the world.

It happens regularly. Vancouver is trying to contain a measles outbreak sparked when foreign travelers visited for the Olympics, carrying two different measles viruses from Asia.

The first recognized infections — in two Canadians and a visiting American — occurred around the Olympic closing ceremonies. "Downtown Vancouver was shoulder-to-shoulder on many days of that period," notes Dr. Monika Naus of the British Columbia Centre for Disease Control.

So far, measles has spread to 16 people in Vancouver, Naus says. Half of them are in one large unvaccinated household. The parents reject vaccination.

"It's not a religious issue," Naus says. "A friend of the family who had anti-vaccination sentiments was influential in convincing them not to get vaccinated."

Many parents who refuse to get their children vaccinated worry that vaccines — and the one for measles, mumps and rubella in particular — cause autism. It's a belief that persists despite years of studies and expert panels that find no scientific link.

Health officials say there are growing pockets of vaccine refusers in communities across the land. The numbers are not great. But these pockets of "intentionally unvaccinated" children give the virus more opportunities to spread when it does arrive.

And even if the number of measles cases in each outbreak is kept small, the arrival of measles disrupts lives and forces public health officials into high gear to contain the damage.

Ask Karen Waters-Montijo, chief of immunization at the San Diego County health agency. She and her colleagues, including officials at the U.S. Centers for Disease Control and Prevention in Atlanta, write about the impact of a 2008 measles outbreak in the April issue of the journal Pediatrics.

Waters remembers the February day when a public health nurse called to report a confirmed case of measles: a 7-year-old boy who had picked up the virus during a family trip to Switzerland.

As unlikely as it seems, Switzerland is one of those European countries where measles vaccination rates have fallen considerably below 95 percent — the level public health officials say is necessary to prevent measles from circulating in the community.

When Waters heard about the case, she says, "I just about fell off my chair. The child had two siblings, attended public school. The family wasn't vaccinated. And in fact, there were a lot of unvaccinated children at the school, as well."

They were "intentionally unvaccinated," meaning their parents had filed Personal Beliefs Exemption forms to opt out of the vaccinations that are required for schoolchildren. Parents of almost 10 percent of the students at Patient Zero's school had signed PBE forms.

That may not sound like much. But no virus is more contagious than measles. "If a measles-infected person walks into a room with 10 uninfected people," says Dr. David Sugerman of the CDC, "nine of them will get infected."

Moreover, anyone who goes into that room within the next two hours after the infected person has left is likely to get measles, too.

So Waters and her colleagues were alarmed when they learned that it had taken a week before the measles infection of Patient Zero was diagnosed. In the meantime, he had exposed many people in doctors offices and clinic waiting rooms, as well as in school. He had also infected his siblings, and they had exposed many others.

"It was slow to be recognized, and there's a good reason for that," Waters says. "We hardly ever see any measles cases. Most doctors have never seen a case." Once the first patient was diagnosed, moreover, health authorities were slow to be notified.

Once they found out, health authorities kicked into gear, tracing everybody who came into contact with the first cases — and everybody who was in contact with them. That net captured people who got exposed (and, in some instances, infected) at supermarkets, circus performances, fairgrounds and a Hawaii-bound airplane.

It added up to 839 people. Of those, 73 were unvaccinated children — 25 whose parents chose not to get them vaccinated, and 48 children under 12 months who were too young to be vaccinated.

To limit the spread of the virus, San Diego County officials asked parents of those 73 children to keep them at home. Many of them were pretty unhappy about that.

"Imagine, you start off on a normal day," Waters says, "and you're getting ready to drop your child off at their child care place, and you're greeted by a public health nurse who says your child has been exposed to measles, and we'd like you to go home and be there for the next three weeks while we monitor you for symptoms."

Parents of exposed children who believed in vaccination were incredulous and angry, she says: "They said, 'What do you mean, people don't get vaccinated? Why is this happening?' "

In the end, the San Diego outbreak was confined to a dozen children. No big deal, you might think — except that it upended a lot of lives, and the county spent $10,000 for each of those cases in order to keep the virus from spreading more widely. That, and the fact that more than 95 percent of the general population was immune, kept the outbreak far more limited than the previous San Diego measles outbreak in 1991, when there were 1,000 cases and three deaths.

Afterward, Waters and her colleagues looked into who the vaccine refusers were and what their attitudes toward vaccination were.

They're college educated, higher-income and believers in the power of a "natural" lifestyle — things like organic food and prolonged breast-feeding — to keep their children's immunity strong enough to ward off vaccine-preventable diseases.

And they just don't believe it when government officials like Karen Waters say vaccines don't cause autism.

Many communities have pockets of vaccine refusers. So the United States and other countries with growing numbers of "intentionally unvaccinated" people are likely to see more outbreaks.

There's bound to be occasional importation of measles from countries with circulating virus. These aren't only developing nations; they include Ireland, Germany, Israel, Japan and the United Kingdom, where measles had been eliminated until large numbers of parents started opting out of vaccination programs.

"If measles crossed the border into those populations, there's a potential for a sizable outbreak," says Dr. Jane Seward of the CDC.

Back in San Diego, Karen Waters is still trying to persuade skeptical parents to get their children vaccinated. She says refusers are not bad guys in this drama.

"You know, these are very nice people," she says. "They care a lot about children, as I do. We all want safe vaccines. We all want healthy children, and we all want answers about autism. It's unfortunate there's a group of people who are off on this track, that believe vaccines are at the root of this problem."

So far Waters hasn't changed many minds. She knows of a thousand families who have refused to get their kindergartners vaccinated. That's 100 more since that last San Diego measles outbreak.