Accessibility links
Taliban Renew Threat Against South Koreans A Taliban spokesman is warning that 21 South Korean hostages will be killed if Afghanistan President Hamid Karzai does not release militant prisoners. Karzai refused to make a deal after a meeting with President Bush. 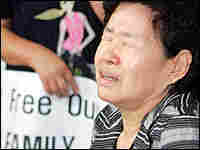 A relative of one of the South Korean hostages in Afghanistan asks for their safe return at a news conference in Sungnam, South Korea. Getty Images hide caption 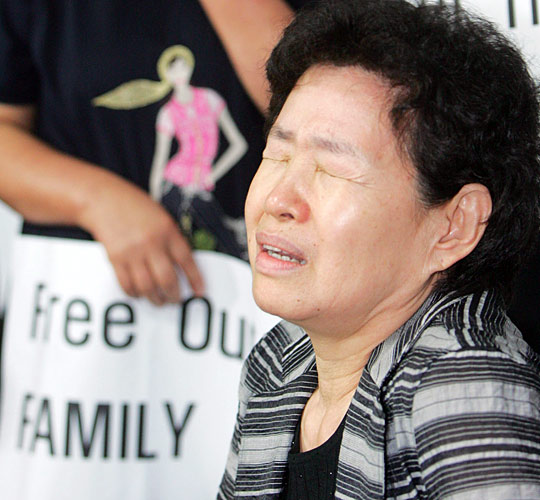 A relative of one of the South Korean hostages in Afghanistan asks for their safe return at a news conference in Sungnam, South Korea.

A purported Taliban spokesman again warned that 21 South Korean hostages will be killed unless militant prisoners are freed, but Afghan President Hamid Karzai refused to make a deal after a meeting with President Bush.

"Bush and Karzai have to accept the Taliban conditions otherwise they will see a very bad result for Korean hostages," said the spokesman, Qari Yousef Ahmadi.

Mr. Bush and Karzai ruled out making any concessions to the Taliban militants during their meetings Sunday and Monday at Camp David.

The militants kidnapped 23 Korean aid workers traveling by bus from Kabul to Kandahar on July 19. Two male hostages have been executed.

In South Korea, relatives of the hostages expressed disappointment that the presidential summit failed to produce concrete measures to bring the captives home.

"We could barely sleep while waiting for the results of the summit meeting, as we were full of such high hope and expectations that the release and safe return of our family members abducted there is up to the meeting of two leaders," said Cha Sung-min, a spokesman for relatives of the hostages, at their Saemmul Community Church in Bundang, south of Seoul.

"The result, however, turned out to be falling short of actively saving their precious lives," he said.

South Korean Foreign Minister Song Min-soon said the results of the summit were anticipated and cautioned that the country should be prepared for a protracted standoff, noting that other hostages in Afghanistan had been held an average of 35 days.

Song also said none of the captives were suffering from critical health problems.

"The hostages can't be perfectly healthy after nearly 20 days in captivity. In that sense, they are not healthy on the whole," Song told reporters, according to Yonhap news agency. "There has been no symptom of any of the hostages being critically ill."

The militants attacked police at a checkpoint in Shinkay district in Zabul province on Monday, and the ensuing clash left five suspected militants dead, said Ali Kheil, the spokesman for Zabul's governor. There were no police casualties, he said.

Insurgent attacks and military operations have killed more than 3,600 people so far this year, most of them militants. Much of the violence has been concentrated in the former Taliban stronghold in the south.

International forces are often the targets of suicide bombers, and they repeatedly warn Afghan civilian motorists to slow down or steer clear of convoys so they are not mistaken for attackers.

Several civilians have been killed in such incidents.