Accessibility links
Local Support Key In Upcoming Kandahar Fight In Afghanistan, officials are seeking the support of local leaders in Kandahar ahead of a U.S.-led offensive to clear the Taliban out of the southern province. But many locals lack confidence in Afghan officials and Western forces, whom they blame for the recent rise in violence. 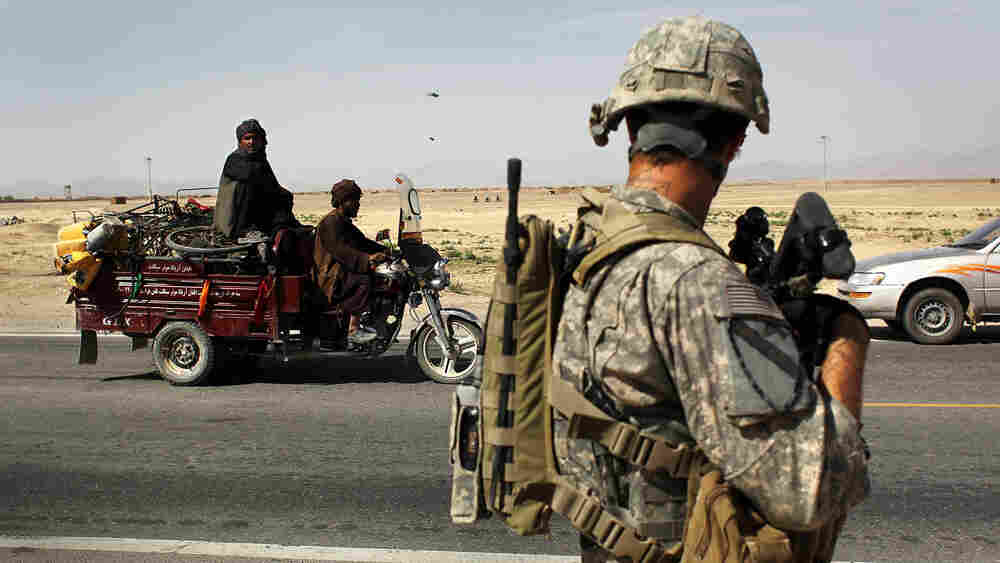 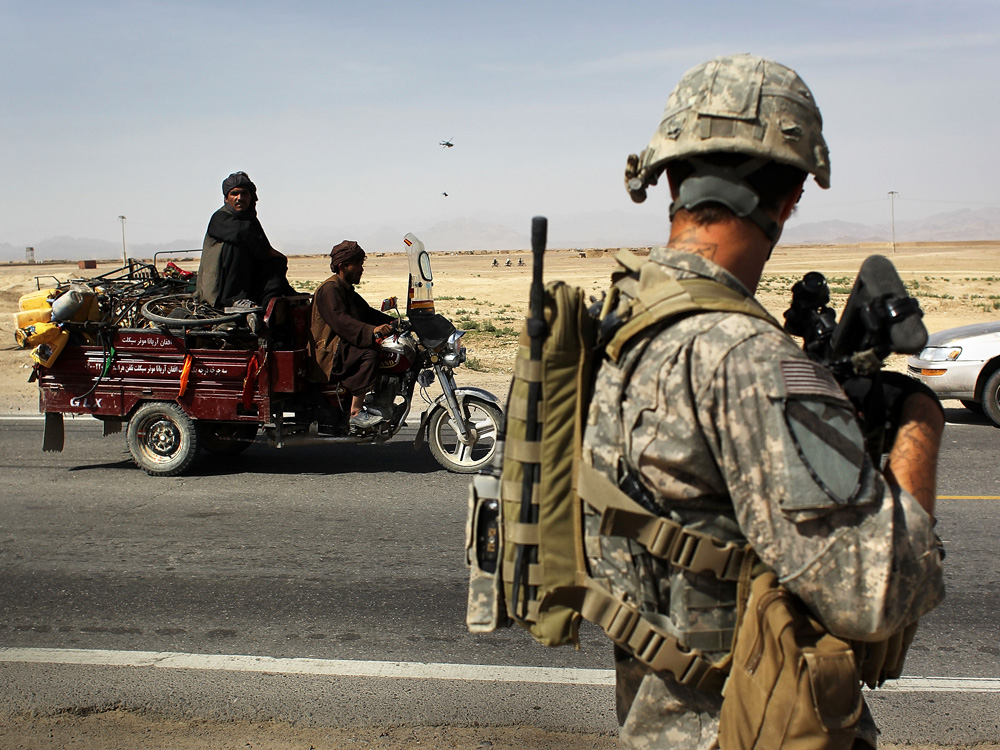 Afghan motorists pass a U.S. soldier on patrol last month in Afghanistan's southern Kandahar province. U.S. and Canadian forces have announced a major upcoming offensive against the Taliban in Kandahar, the group's stronghold and spiritual birthplace.

Preparations are under way in Afghanistan for a U.S.-led offensive this summer aimed at clearing the Taliban out of the southern province of Kandahar. Officials say the first step is to get tribal and community elders onboard.

Tooryalai Wesa, the governor of Kandahar, has said that no operation will happen unless "we have the people's permission."

But that won't be easy to obtain.

Many residents of Kandahar blame the growing level of violence over the past few years on Afghan officials and Western forces — not the Taliban. More foreign troops near their homes and businesses are the last things they want.

Police headquarters in the city of Kandahar was one of the targets of a rapid succession of suicide bombings March 13 that killed some 30 people.

The [March 13 suicide] attack didn't just cause casualties. It traumatized people and made them feel hopeless.

Rahmatullah, a baker whose shop is near the station, recalls fleeing with a cousin on his motorbike when an explosives-laden ambulance rammed the police compound.

He adds that he has never felt this unsafe in Kandahar in his life.

Such fear is widespread these days, amid bombings and a growing number of kidnappings and assassinations.

"The [March 13 suicide] attack didn't just cause casualties. It traumatized people and made them feel hopeless," says Qader Noorzai, who heads the Kandahar office of the Afghan Independent Human Rights Commission.

Noorzai says things are so bad that many parents are too afraid to send their children to school.

"The security is getting worse day by day. Before, we used to be able to visit just about all of the 17 districts in Kandahar province. These days we can only go to five," he says.

The mounting problems have spurred American and NATO officials to train their sights on Kandahar. They want to do there what U.S. Marines have more or less managed to do in neighboring Helmand province: join with Afghan forces and steer the Taliban away from population centers into the mountains and deserts.

Driving the Taliban from Kandahar — the group's spiritual birthplace — would be a major coup for the international military coalition in Afghanistan, much bigger than the Marine offensive that captured the Taliban stronghold of Marjah in February. 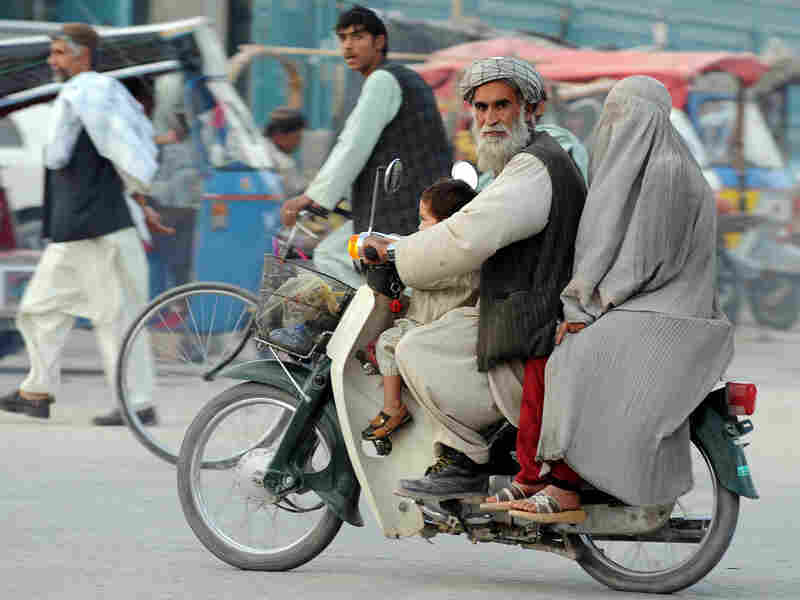 An Afghan man rides on a motorcycle with his family on a street in Kandahar city in November 2009. Many in Kandahar blame Western forces and Afghan officials — not the Taliban — for growing violence in the area during the past few years. Locals are nervous about the military offensive against the Taliban this summer. Banaras Khan/AFP/Getty Images hide caption 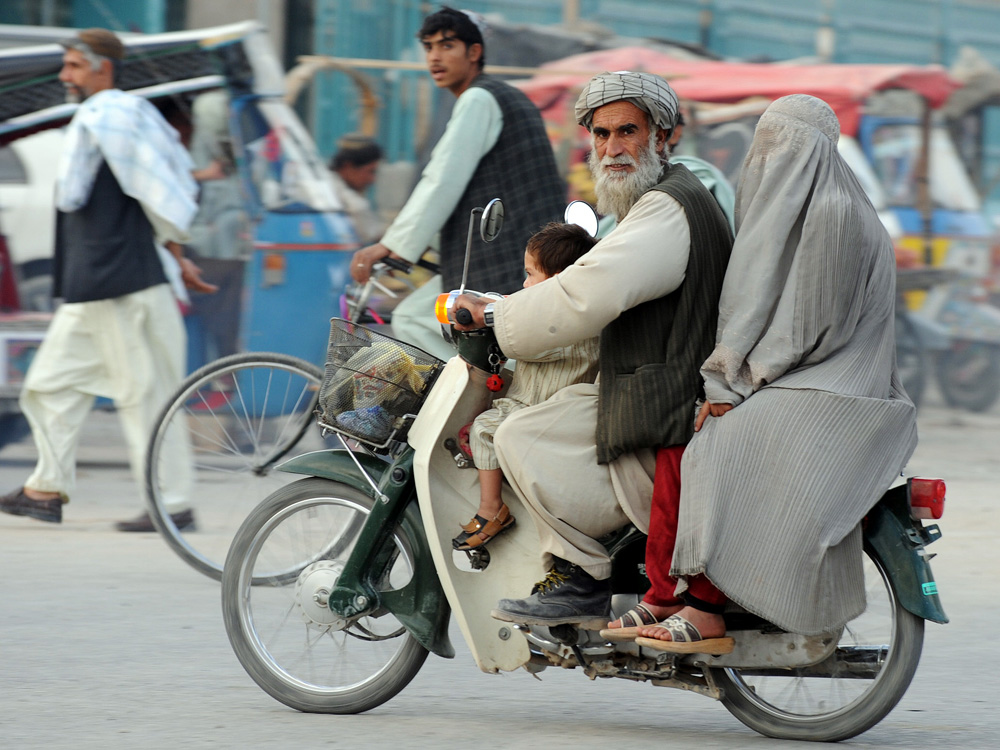 An Afghan man rides on a motorcycle with his family on a street in Kandahar city in November 2009. Many in Kandahar blame Western forces and Afghan officials — not the Taliban — for growing violence in the area during the past few years. Locals are nervous about the military offensive against the Taliban this summer.

It could also mean an economic boom for Kandahar if this largest city in southern Afghanistan is made safe again for businesses and aid agencies.

Afghan and Western officials are meeting with tribal elders across the province to set the stage for a massive, joint offensive with Afghan troops this summer.

Many residents, however, are alarmed at the prospect of a Kandahar fight. Abdullah Qazdiwal, a notary in Kandahar, is one of them.

"The operation won't work. Just like it didn't in Marjah. Even Helmand's governor says the security situation is still bad there," he says.

Government officials, such as Rona Tarin, are also worried. The 38-year-old director of women's affairs in Kandahar would like to see the militants gone. She rarely goes anywhere other than to the office, and the growing Taliban menace in Kandahar has her thinking she might quit her job.

Last month, Tarin received a threatening text message on her cell phone, just hours after Kandahar's director of information and culture was assassinated: "Majid Babai has been killed and if you don't leave your job, you will be next."

It isn't a hollow threat. Her predecessor was gunned down in late 2006. Other female officials have been killed or escaped assassination attempts since then. And Afghan intelligence officials have warned her she is on a Taliban hit list.

But Tarin doesn't think a Western military operation will solve anything.

"It won't clear the Taliban permanently from Kandahar city. Its fighters will just move somewhere else," she says.

[The Western offensive] won't clear the Taliban permanently from Kandahar city. Its fighters will just move somewhere else.

Some Afghan officials say the U.S.-led operation in Marjah earlier this year sent scores of Taliban fighters from Helmand into neighboring Kandahar in recent weeks. They are believed to be cooperating with local militant cells and foreign fighters who came to the area from neighboring Pakistan.

But there are other reasons why Kandahar residents have little faith in the coalition or Afghan government.

The coalition's military convoys rolling through Kandahar attract militants who launch suicide attacks and plant roadside bombs. The armored vehicles also snarl traffic. They inconvenience Afghans who are forced to a complete stop — sometimes for an hour or longer — to keep their distance from jumpy Westerners with guns.

Afghans also are worried about the long-term prospects. Residents of Kandahar interviewed for this story doubt that once the Taliban militants are pushed out, foreign troops will stay long enough to make sure they don't come back.

Afghan authorities don't inspire much confidence in Kandahar, either. Police officers in Kandahar, as in elsewhere across Afghanistan, have long been accused corruption. Some also are accused of complicity in local killings and kidnappings, while militants they arrest sometimes end up being released. They then go after citizens who helped tip off police in the first place.

Even though U.S. and NATO forces are more engaged these days in training and fine-tuning the police force, suspicion lingers. Reaction has been lukewarm to plans announced by the Interior Ministry to send 2,000 new police officers to Kandahar.

Noorzai, of the Human Rights Commission, says even 20,000 officers wouldn't stop the Taliban. That, he adds, will only happen when people trust the authorities enough to cooperate with them.

That's what Wesa, Kandahar's governor, says he and international partners are trying to do. He says they are focused on talking with Afghan elders and finding out their needs.

He says they want to provide more governance, services and Afghan security forces to the far reaches of Kandahar province. Then, people won't have to travel as far for help in these troubled times.