Accessibility links
Cancer Cluster In Florida Worries Parents There's no explanation yet for a spate of brain-cancer cases among children who live in an area of Palm Beach County called The Acreage. State health officials confirm the numbers are higher than normal, but they haven't been able to pinpoint a cause. And that has families frustrated.

In Florida's Palm Beach County, residents of a rural community find themselves caught in a medical mystery. Over the past 16 years, at least 13 cases of brain cancer have been diagnosed among children living in an area called The Acreage.

State and federal health officials have designated it a "cancer cluster" — meaning they've found a higher-than-expected number of one type of cancer in a single area.

As resident Michelle Damone noted at a recent residents' meeting, that designation hasn't brought any answers.

"Is there a contaminant out there? Do we need to do more testing? Have we not looked at something? Is there more to look at?" Damone said. "We need to review statistics together. We all need to ask, what do the statistics mean?"

For residents who have been packing into the meetings here in The Acreage, the issue is not statistics but the health of the community's children.

The Acreage is a sprawling area, with about 40,000 residents spread out over more than 100 square miles northwest of West Palm Beach. Homes are on acre-plus lots with septic systems and well water. 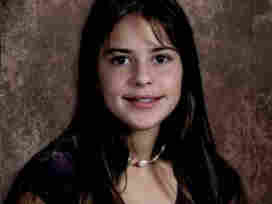 Tracy Newfield says she moved here with her family in 2002 because of the area's beauty and the large lots. The extra land gave her family room for Jet Skis, a boat and ATVs. But about two years after they arrived, her young daughter, Jessica began complaining of headaches. Newfield says doctors conducted tests and prescribed medicine but couldn't identify the problem.

"Finally, as the tumor grew, in sixth grade, she came home from school one day and couldn't stand the headache. And so I took her directly to the hospital. We did an MRI. We started to drive home and they told me to come back, come back to the hospital," Newfield says.

For years, Newfield says, she thought her daughter's cancer was an isolated — and rare — incident. That changed in 2008 with a chance meeting at Miami's Children's Hospital.

"Two families ran into each other in a hospital when they were getting the same exact surgery. They go to the same church and you're told by the surgeon, you'll never see one of these in your neighborhood. Little by little, when those two mothers found each other, and word got out in the neighborhood, we then found there were many of us," Newfield says.

After months of prodding, Florida's health department began investigating. This year, the agency concluded that The Acreage was the site of a cancer cluster.

The finding was a vindication for some, but what followed infuriated many: A state health official said there was no plan to search for an environmental cause. Residents and elected officials protested, and that position was quickly reversed. But many residents in The Acreage remain suspicious about the state's commitment to the investigation.

Stephanie Peskowitz is a nurse and a mother, with two kids younger than 5. Like many here, she's frustrated that state investigators haven't told residents exactly what they plan to do.

A cancer cluster is a statistical increase, but that does not mean there is one single cause for all the cancers in the cluster.

Lauren Lewis, with the Centers for Disease Control and Prevention

"They've just started on the soil testing, and there are a lot of questions about that. So they really haven't educated us enough about what their plan of action is. We haven't seen actually even a plan of action, so, we don't know where it's going to go from here," Peskowitz says.

The department hasn't released a plan of action for its Acreage investigation, officials say, because it's a process that unfolds step by step.

Carina Blackmore, the state's environmental epidemiologist, says she can't say how long the investigation will take or even what the next step will be.

"We will evaluate the data that the Department of Environmental Protection is collecting. And then we will get together with our partners in the state and the Centers for Disease Control and based on those results determine what the most prudent next step is," Blackmore says.

All along, Florida's health department has been upfront with a basic truth about cancer-cluster investigations — that they rarely pinpoint a cause, environmental or otherwise.

"I don't want to hear that anymore, I really don't, because that was the first thing that was said when they did the confirmation," Peskowitz says. "And as far as I'm concerned, you can't start being on the negative before you've done any investigating, before you know what's going on. We want to hear that you are actively looking to see what the problem is, and you are going to do everything to the extent of your power to try and rule out what it is."

While state health officials are investigating, the federal Centers for Disease Control and Prevention has also been involved, advising the state and monitoring the results. Lauren Lewis, an environmental epidemiologist for the CDC, says that in decades of cancer-cluster investigations, the CDC has never yet been part of one that pinpointed a clear environmental cause.

She says cancer-cluster investigations are difficult for a number of reasons: People move, cancers take years to develop and the numbers of cases are usually small.

"A cancer cluster is a statistical increase, but that does not mean there is one single cause for all the cancers in the cluster. And because there may be a cluster or there may be an increase in the number of cancers, it doesn't mean those cancers are linked," Lewis says.

In The Acreage, for every resident like Stephanie Peskowitz, a mother concerned about the health of her children, there are also residents like Sean Foster. Foster is a 35-year resident who helped build the neighborhood. He's a homebuilder who put in many of the wells that are now being tested as part of the state investigation.

I have to heal and make sure I can look at my daughter and say, 'I don't think it's an environmental cause.' I don't feel that right now.

"And we need some leadership that puts out this positive news that defends our community and lets people know that with every good test, that there may be more and more reason to stay," Foster says.

Realtors are unhappy that they're now required to add a cancer-cluster disclaimer to homes sold in The Acreage. Some residents have already moved, including one of the families who prompted the cancer-cluster designation.

That decision — whether to move or to stay — is one Tracy Newfield says many families in The Acreage are wrestling with, including hers. She says she and her husband want the facts before they make any decision. If all the tests come back negative, she says, with time, she may eventually feel comfortable staying in the community.

"I have to heal and make sure I can look at my daughter and say, 'I don't think it's an environmental cause.' I don't feel that right now," Newfield says.

Officials with Florida's Departments of Health and Environmental Protection seem to be getting the message. They've opened a special office in The Acreage to answer residents' questions and to share information about the ongoing cancer-cluster investigation.