Accessibility links
Report: Foster Kids Face Tough Times After Age 18 Josh Mendoza turned 18 this year and suddenly found himself out of his foster home and on his own. He's one of 30,000 foster kids to age out of the system this year. A new report finds that these teens are more likely than their peers to end up in jail, homeless or pregnant.

Audio Slideshow: Reflections On Aging Out

It's hard turning 18 — moving out, finding a job, going to college. But many foster children have to do it by themselves, without the lifeline to parents and home that helps many teens ease into independence.

A major report out Wednesday says that many former foster kids have a tough time out on their own. When they age out of the system, they're more likely than their peers to end up in jail, homeless or pregnant. They're also less likely to have a job or go to college.

Life can be a struggle for these young people, even with help from the government and nonprofit agencies.

Aging Out Of Foster Care

Take Josh Mendoza, a shy young man from Tampa, Fla., with soulful eyes and a hint of dark hair along his upper lip. He lived in 14 different group homes after he was removed from his mother's care more than two years ago because she used drugs.

"This is my apartment," Mendoza says as he opens the door to a ground floor unit at an apartment complex in Tampa. The living room is empty except for a navy blue futon and a small TV. The white walls are bare. He has only been here for two weeks. There's food in the cupboard, but not a lot: some spaghetti, Cream of Wheat and cereal.

Living on your own is a little weird, says Mendoza. It's kind of lonely and a challenge, he says. His only cooking experience in foster care was heating soup in the microwave. He looks at a frying pan on top of his new stove. The bottom is covered with congealed fat.

"Yesterday, I was trying to cook, but I don't think it turned out too good," Mendoza says. "With the burgers, it kind of got burnt."

But unlike many foster care teens, Mendoza has been getting some help.

Nick Reschke is Mendoza's transition specialist, a kind of big brother/parent provided to foster youth in the Tampa area. He helped Mendoza find his apartment, sign the lease and move in.

"The day he turned 18, we went to pick up his check, went grocery shopping, went over a list of what he needs, what his budgets are," says Reschke, who also helped Mendoza pick up some donated furniture and supplies. "And then after that, Josh and I, we pretty much just cleaned the apartment up, wiped down the counters, wiped down the cabinets and set up his house. And that was his first night."

For eight years, researchers have followed about 600 young adults who aged out of the child welfare systems in Iowa, Wisconsin and Illinois. The report finds that at age 23 and 24, former foster youth are more likely than their peers to be:

Unemployed — Less than half were employed.

Homeless — Almost 25 percent had been homeless since exiting foster care.

Pregnant — More than 75 percent of young women had been pregnant since leaving foster care.

It was also Mendoza's 18th birthday.

"We have an abrupt cutoff, like most states," says Diane Zambito, who runs Connected by 25, a Tampa nonprofit that is trying to smooth the transition for former foster care youth. "We go from 'you're in foster care, where you may handle $10 a month' to 'you're responsible for everything.' "

Zambito says things have come a long way since 10 years ago, when some foster kids here turned 18, put their belongings in a plastic bag and were taken to the nearest homeless shelter because they had nowhere else to go. But she says it's still not enough.

"We need to offer something for these young people other than, 'Here's Option A: Fall off the cliff,' " she says.

Clinging To The Edge

The new study — from Chapin Hall, a policy research center at the University of Chicago — finds that those who age out of foster care are not exactly falling off a cliff, but they are desperately clinging to the edge.

Mark Courtney is with Partners for Our Children, a policy center at the University of Washington. Over the past eight years, Courtney and colleagues from Chapin Hall have been following the progress of more than 600 former foster kids.

"Many of them are faring poorly," says Courtney. "Less than half were employed at 23, 24. They're much less likely to have finished high school, less likely to be enrolled in college or have a college degree."

In fact, by age 24, only 6 percent have two- or four-year degrees. More than two-thirds of the young women have children. Nearly 60 percent of the males have been convicted of a crime. Almost a quarter were homeless at some point after leaving foster care.

"Those children are our children, the children of society, of the state," says Courtney. "I would argue that we have no business taking them into care and then keeping them until they're in the transition to adulthood, unless we're going to try to do a good job of that."

They're trying in Tampa.

Two weeks after his 18th birthday, Josh Mendoza meets his advisers at a GED program for those aging out of care.

"All right, so Josh, you know we do this once a month," says Sarah Hart, the program coordinator. "You've been in the hot seat before, so let's start by getting an update on your progress."

Hart is concerned because the first day Mendoza was on his own, in his new apartment, he didn't come to school.

Mendoza sheepishly explains that his alarm clock didn't go off and he missed his bus. He says he had no other way to get there. Hart responds as a parent might.

"My question is, did you call Mr. Mark or Miss Colette to let them know you weren't going to be here that day?" she asks.

"OK. You know, those things are going to happen," Hart responds. "You've just turned 18, and you're getting adjusted to coming from a new place. I mean, I get all that. If that happens again, though, you have to call your teachers and let them know. That's part of being responsible."

Mendoza knows he can't afford to screw up. His $1,256 monthly stipend from the state is contingent on him staying in school.

Researchers say former foster kids who have someone to rely on do better than those who don't. But right now, only a handful of states provide foster care beyond 18. While several other states are planning to do so in response to a new federal law, state budget problems could put a crimp in those plans. In Florida, there's even talk about cutting the stipend for former foster kids in half. 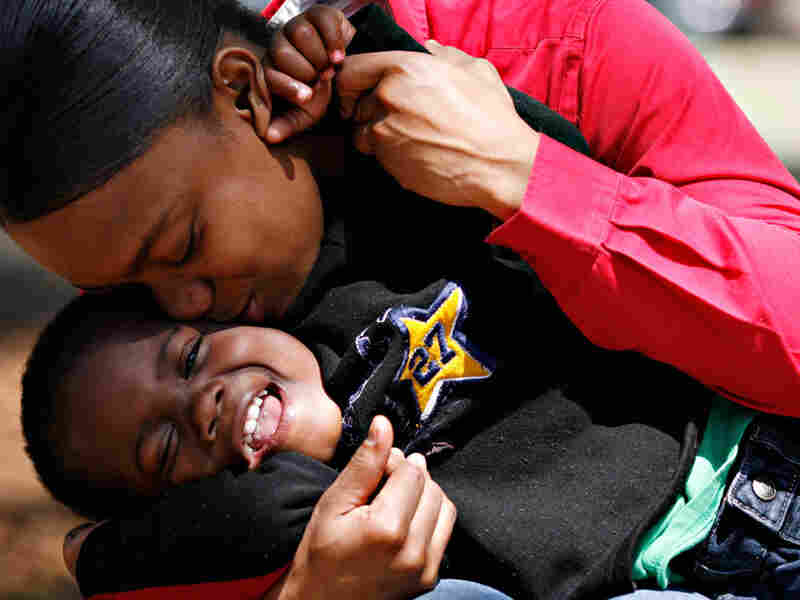 Katrena Wingo, who spent most of her life in foster care, kisses her son. Melissa Lyttle for NPR hide caption 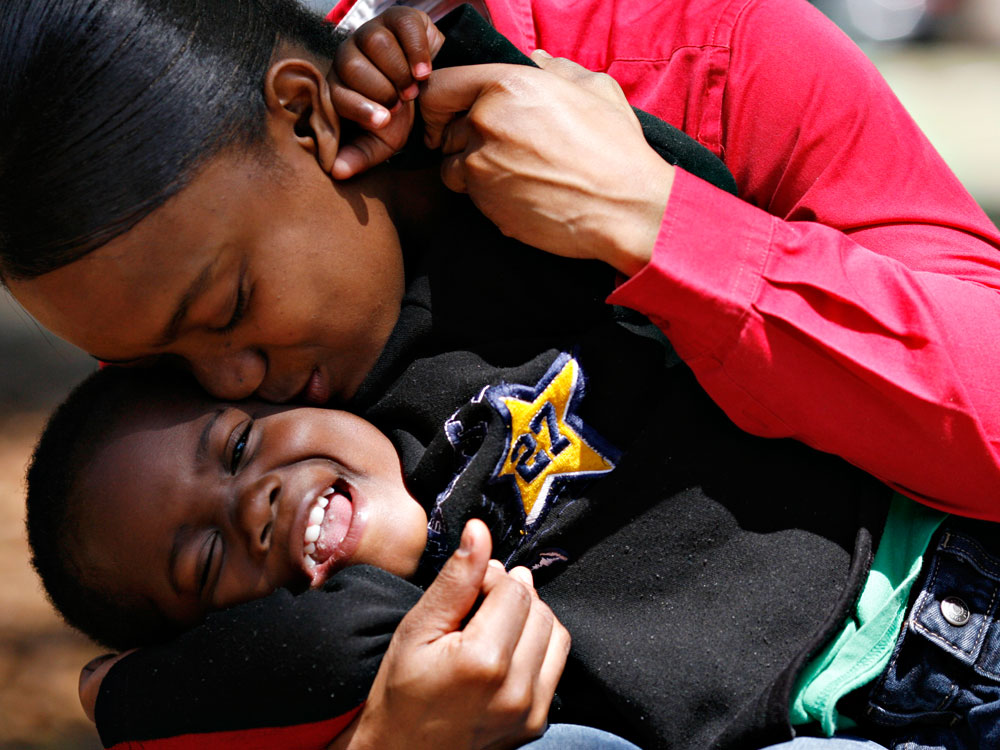 Katrena Wingo, who spent most of her life in foster care, kisses her son.

But Courtney says this is also a resilient group. By age 24, about half of those surveyed in his new study appear to be doing OK. Their lives have begun to stabilize.

Katrena Wingo of Tampa considers herself one of those people. At 24, she has a job and a place for her and her 3-year-old son, Ajai, to live. It's a tiny duplex, but with a yard big enough for her to play with him when she comes home from work.

But it's been a long haul getting here. Wingo entered foster care as an infant and stayed until her 18th birthday. After she aged out, she was OK for a while, but then she got pregnant. She stopped working and spent months moving from one friend's sofa to another.

Eventually, with the help of friends, some family members and the nonprofit Connected by 25, she began to turn her life around. Wingo says perhaps the biggest eye opener was having a child of her own.

Wingo still depends on food stamps — and on her landlord to cut her some slack when the rent is due. But she's back in school trying to earn her degree. She hopes someday to become a counselor for troubled youth.

And Josh Mendoza? He says that if he gets his college degree, his goal is to run group homes.