Accessibility links
U.S. Nuclear Policy Shift Seeks To Diminish Threat The Obama administration released its nuclear posture review Tuesday, narrowing the use of nuclear weapons to the role of deterring nuclear attack. The review, released two days before Obama and the Russian president meet to sign a new arms treaty, maps out a strategy for the U.S. to combat nuclear proliferation. 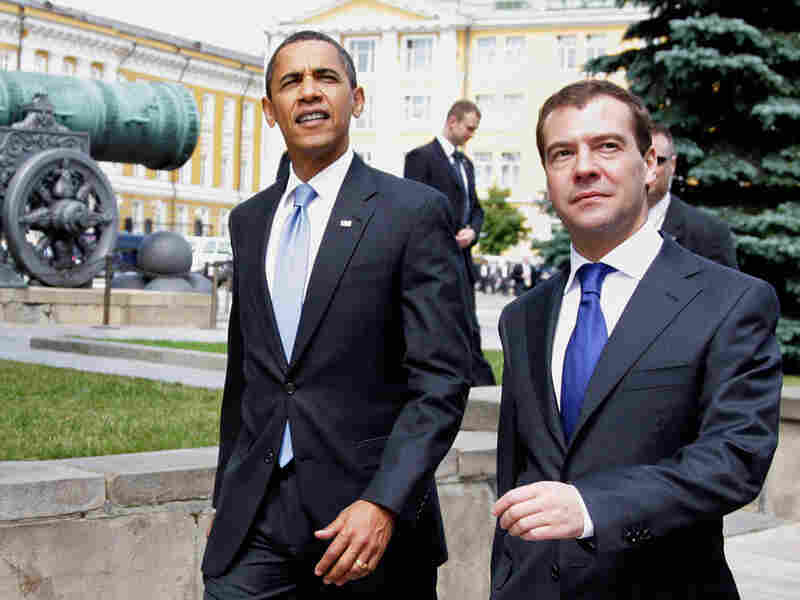 President Obama and Russian President Dmitry Medvedev during a summit last July at the Kremlin in Moscow. The two leaders will meet Thursday in Prague to sign a new Strategic Arms Reduction Treaty — START — an agreement that will cut the number of strategic warheads and missiles maintained by the world's two largest nuclear powers. Dmitry Astakhov/AFP/Getty Images hide caption 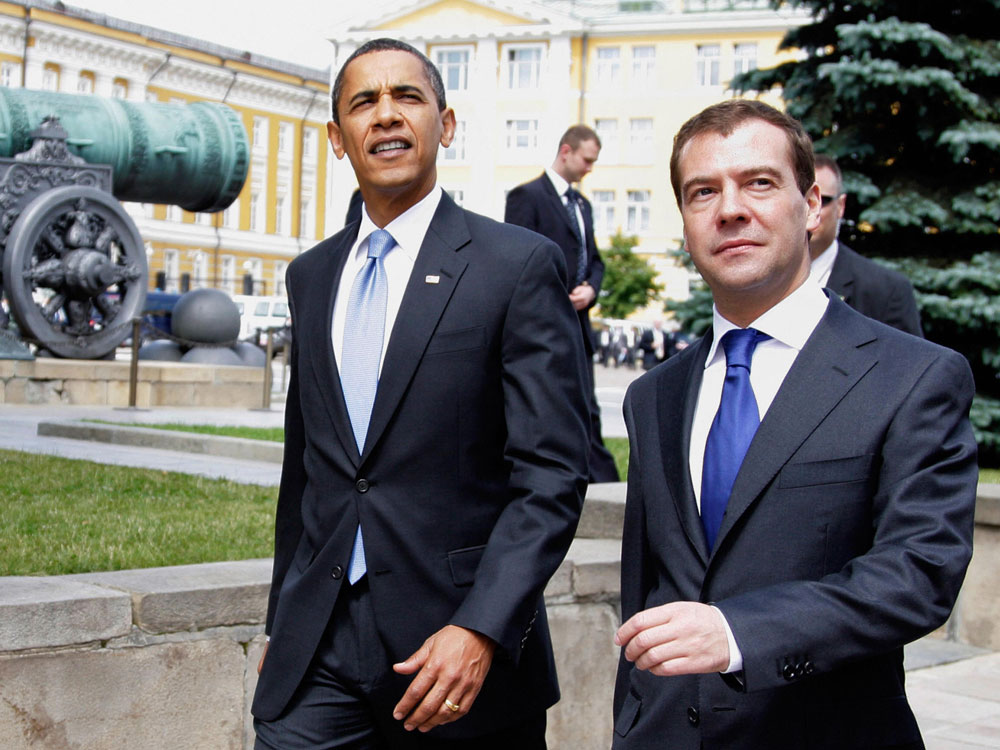 President Obama and Russian President Dmitry Medvedev during a summit last July at the Kremlin in Moscow. The two leaders will meet Thursday in Prague to sign a new Strategic Arms Reduction Treaty — START — an agreement that will cut the number of strategic warheads and missiles maintained by the world's two largest nuclear powers.

The Obama administration released its nuclear posture review Tuesday, narrowing the American use of nuclear weapons to the fundamental role of deterring nuclear attack.

For the first time, the review maps out a strategy for the U.S. to combat nuclear proliferation and the spread of dangerous nuclear materials. Defense Secretary Robert Gates told reporters at the Pentagon that the change will lead to an eventual nuclear-free world but would not limit U.S. options if states like Iran or North Korea decided to launch a nuclear attack.

On Thursday, President Obama and Russian President Dmitry Medvedev meet in Prague to sign the new Strategic Arms Reduction Treaty, or START, which will reduce the number of strategic nuclear warheads each side can deploy.

Obama says he wants these steps to put the U.S. and the world on a course toward the total elimination of nuclear weapons, a very difficult goal indeed.

In the 65 years since the first atomic bomb explosion, nations have sought nuclear weapons for many reasons. Sometimes they bestow prestige on a nation or a nation's leader. Sometimes a nation's scientific community seeks the status that they believe comes with a bomb.

But mostly the issue is security, says George Perkovich, an expert on nuclear weapons at the Carnegie Endowment for International Peace.

"I think the overriding issue has to be the political security relationships among states, and their lack of confidence or the ongoing conflicts or unresolved conflicts," he said.

Think the U.S.-Soviet relationship during the Cold War; or India-Pakistan today. Perkovich points out that negotiations and treaties can address the technical problems of getting rid of nuclear weapons, but that's not enough.

"Even if you identify the technical procedures and means by which you could physically eliminate all the weapons and feel fairly confident about verification, states wouldn't choose to do it if they fundamentally were at odds, thought there was a risk of war amongst nuclear-armed competitors and so on," he said. "They wouldn't do it regardless of the technique that you had to implement it."

Still, as tensions ease, states can take incremental steps toward fewer nuclear weapons, as the U.S. and Russia are doing with the new START agreement.

But that treaty doesn't address all the components of the U.S. and Russian nuclear arsenals, the world's largest. There are several thousand stored strategic warheads in Russian and U.S. warehouses. And there are smaller tactical nuclear weapons that no treaty has ever covered.

Many would like to see the U.S. and Russia address these issues soon.

"Tactical nuclear weapons are militarily irrelevant to the defense of Russia, the United States or Europe," said Daryl Kimball, the director of the Arms Control Association.

"They are a security liability. The United States and Russia don't need to hold on to 2[000] or 3,000 nondeployed strategic nuclear weapons that could be theoretically reloaded on some of these missiles and bombers that the two sides still possess," he said.

Not everyone agrees. For Russia, nuclear weapons are still believed to be a key to national defense, according to analyst Alexei Arbatov.

Moscow just published its own defense doctrine, and it reserves the use of tactical or strategic nuclear weapons if the very existence of Russia is threatened. This reveals one of the great paradoxes of nuclear weapons, Perkovich says.

"In a world where you take away everybody else's nuclear weapons and also the U.S. nuclear weapons, the U.S. would have this great advantage in conventional military capability," he said.

Russian leaders look at the U.S. advantage in advanced military technology, and they see nuclear weapons as the great equalizer.

Others in the U.S. believe nuclear disarmament is simply a fantasy. Kimball disagrees.

"The real fantasy is to believe that the nuclear status quo can remain forever without the eventual use of nuclear weapons, by accident or deliberately in a conflict in the future," he said.

All of this doesn't take into account the smaller nuclear arsenals of China, France, and Britain, or the nuclear competition between India and Pakistan, or the hard cases in the Middle East and northeast Asia.

As significant as the developments are this week, a world with no nuclear weapons is still far beyond the horizon.