Accessibility links
A Collection Of Vintage Pop From 'Panama!' Dedicated and curious music fans are regularly finding new chapters in rock history from around the globe. Critic Milo Miles reviews one recent collection, a series of anthologies focusing on the lively story of vintage pop in Panama. 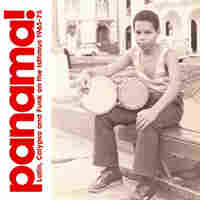 In a recent Fresh Air piece, I talked about the timeless allure of legendary dance clubs like the Palladium in New York. But just as fascinating in their way are vibrant music scenes that never became more than regional hot spots. One lovely example that's recently come to light through reissue anthologies is Panama in the '60s and '70s.

With the straightforward titles of Panama!, Panama! 2 and Panama! 3, these collections resulted from actions that have to happen any time an unknown scene is exposed to the wider world. Somebody, in this case a fellow named Roberto Gyemant, has to go around to radio stations and secondhand stores that haven't thrown out their old vinyl. And then, as they say, start digging through the crates. Pretty soon, irresistible treasures show up.

While searching for records, Gyemant concentrated on the years from the mid-'60s to the late '70s and discovered bands influenced by South America, particularly Colombia, and the Caribbean, particularly Cuba and Puerto Rico, rather than countries to the north. Panama is both a bridge and a crossroads, so the cheerful combination of styles can be startling. Is Sir Jablonsky's "Juck Juck Pt. 1" calypso? Reggae? Salsa? More like a madcap combo of all three.

This Panamanian music was also the creation of a time as well as a place. Not only did musicians cover salsa stars like Willie Colon, but the forces of soul and funk were felt on the isthmus as much as anywhere else. This could misfire -- James Brown is imitated but not even close to duplicated on these anthologies -- but could also produce magic, like an instrumental version of Bill Withers' "Ain't No Sunshine."

The Panama! anthologies introduce some delightful, sturdy bands -- I'm particularly fond of the Silvertones and Maximo Rodriguez and His Panama Stars -- but, sadly, no extraordinary vocalists. More important, amidst all the diversity, what exactly is Panamanian about the music? Although indigenous folk forms certainly play a part, I think the answer concerns an attitude more than a sound. The finest tracks on the Panama! collections have the feel of a lovable, lighthearted scavenger hunt through a worldwide marketplace of music. These tunes are as unselfconsciously multicultural as any I've heard. Begin with Panama! 2, the most consistent and high-energy of these collections, as well as the best balance of folkloric and urban-fusion. You may even get caught up enough to agree with the boast that ends one number: "Panama -- bridge to the world, heart of the universe."