Accessibility links
On Today's Menus, Adjectives Overpower The Entrees From Michelin Guide-ranked restaurants to the humble local Denny's, literary garnishing for ingredients has run amok. Oatmeal is "steel cut," vanilla is "Tahitian," and scallops are not merely trawled but "diver" harvested. So what's behind the tyranny of ingredients? 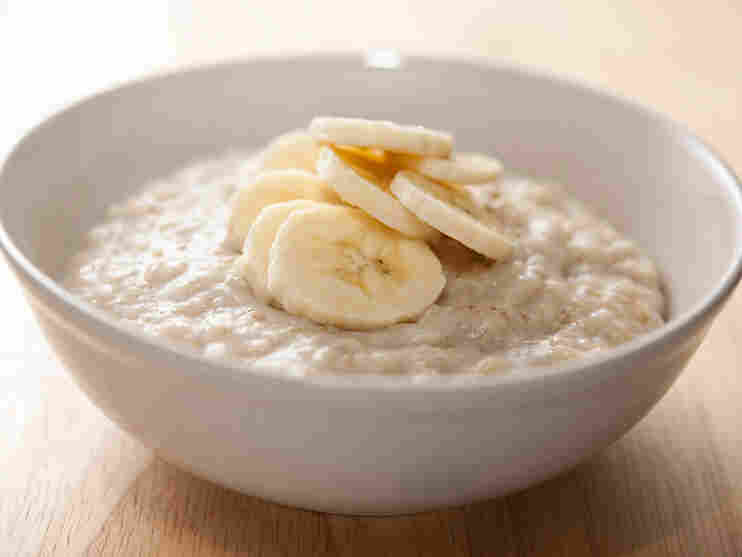 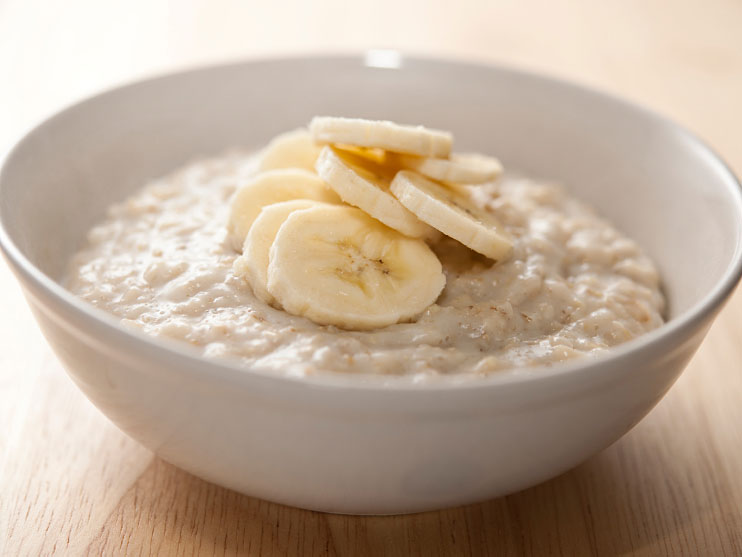 Is it "Irish Steel Cut Oatmeal" — or just plain oatmeal?

Have you looked at a restaurant menu lately?

At Per Se in New York, a three-star eatery, according to the Michelin Guide, a cauliflower dish contains "English cucumber," "Meyer Lemon" and "Young Mint." The asparagus is made with "Cherry Belle Radishes."

Cheeses are "Artisanal Cheeses" at The French Room in Dallas. And at The Herbfarm near Seattle, the salmon is "Lummi Island Reefnetted Sockeye."

Since when did oatmeal become “Irish Steel Cut Oatmeal,” as it is on the breakfast menu at The Henley Park Hotel in downtown Washington?

The trend is not just relegated to the snootier cafes. The gravy that you ladle on biscuits at Cracker Barrel restaurants is not just any old gravy. It's "Sawmill Gravy." Bob Evans offers "Wildfire fried chicken." Denny's advertises "fire-roasted peppers" in certain breakfast dishes and, in an adjectival frenzy, "succulent shrimp," "savory vegetable rice pilaf" and "tangy lemon pepper butter sauce" in its dinner offerings.

It is the tyranny of the ingredient. No longer is a successful dish on the American menu about a successful sum of its parts; it is about the parts themselves. Each ingredient is held up and examined like a precisely cut diamond.

Perhaps this is happening because it's the era of free agency, in which star players are more important than the team itself. Maybe this ingredient mania mirrors the trend of deconstructionism in literary criticism. Or the rise of the cult of the individual in society at large.

A Brief History Of 'Ingredientism'

Whatever is behind the phenomenon, it arose amid a broader social context. First there were celebrity chefs such as James Beard and Julia Child. They wrote best-selling books and created meals on TV. Then came the Slow Food movement, which began in Europe in the 1980s as a backlash against American fast food and reached a rolling boil in this country in the late 1990s. The New York office of Slow Food USA opened in 2000. This push for eco-gastronomy -- linking what we eat to the health of the planet -- was championed by foodie pioneers such as Michael Pollan and Alice Waters, co-owner of Chez Panisse in Berkeley, Calif. The menu at Chez Panisse proffers "Devils Gulch rabbit ragout" and "Sonoma Liberty duck breast." 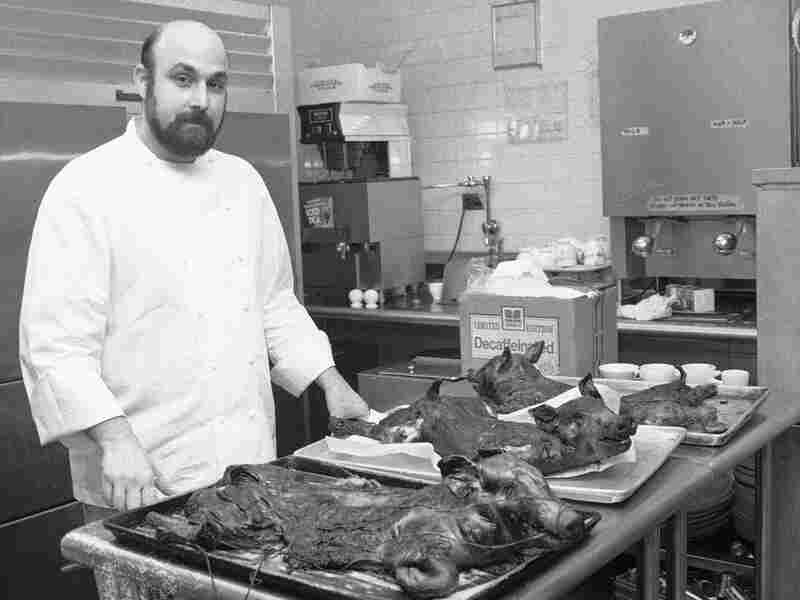 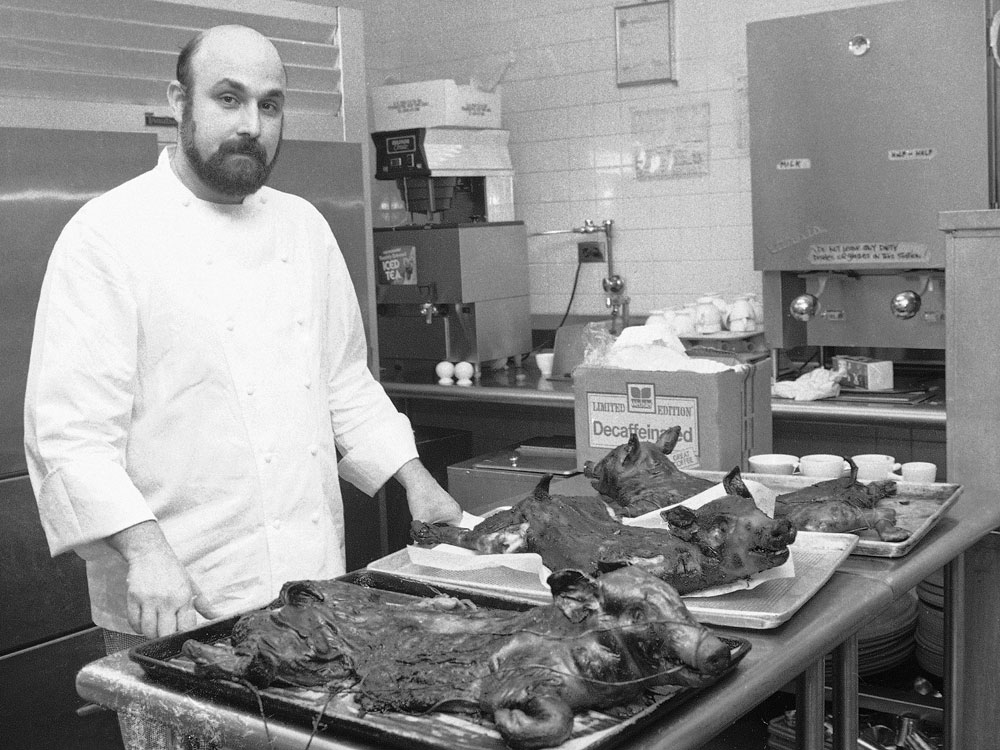 As the national obsession with noshing intensified, whole industries and TV networks sprang up like Vidalia onions. With shows like "Hell's Kitchen" and "America's Test Kitchen," the Food Network, HGTV and other purveyors of edible entertainment turned ingredientism into religion, with televangelistic characters called "top chefs" and "iron chefs."

When asked about the origins of ingredient-centric menus, Gael Greene, the venerable New York victuals critic who oversees the Insatiable Critic website, harks back to the early 1980s and restaurants such as Brooklyn's River Cafe. "With Larry Forgione as chef," Greene says, "geographical credits filled the menu." (The French-trained Forgione is often referred to as "the godfather of American cuisine" by food writers.)

In 1981, River Cafe offered "Bellingham Bay smoked salmon" from Washington state, "New Jersey quail" and "Maine periwinkles." That was the beginning, Greene says, "of chefs seeking out special products in a concerted way and giving credits on the menu. Forgione argued that really good food comes from really good ingredients. It was Forgione who persuaded River Cafe owner Michael O'Keefe to invest in a chicken farm that would raise chickens that would not be caged. Forgione called them "free range chicken."

And so it continued. Before long, menus overflowed with Hawaiian sea bass, Tahitian vanilla creme brulee and baby iceberg lettuce.

The practice, which now extends to supermarket shelves, sparked a scandal recently when the Food and Drug Administration launched an investigation into, and crackdown on, so-called food fraud. A jar of "Sturgeon caviar" found on a grocery store shelf, according to a report in The Washington Post, was actually paddlefish from Mississippi. And cheese made of sheep's milk -- so said the label -- was really made from cow's milk.

"We put so much emphasis on food and purity of ingredients and where they come from," Mark Stoeckle, a physician and DNA expert at Rockefeller University, told the Post. "But then there are things selling that are not what they say on the label. There's an important issue here in terms of economics and consumer safety."

The competition to overdescribe delectables is fierce. Scallops on the menu at Boondocks in Sunriver, Ore., are "Seared Diver Scallops." The tenderloin at New City in Topeka, Kan., is "Hand Trimmed and Hand Cut." And the pork at Soby's in Greenville, S.C., is "Local Heritage BBQ Pork."

Of course, Greene points out, this movement toward showcasing the ingredient has proved a boon to small farms and heirloom farm products. And sometimes menus just sound overwritten and overwrought even when they actually provide valuable information to the consuming cognoscenti. For instance, when Greene is told that the asparagus at Per Se in New York is not made with simple mayonnaise, but with "Black Winter Truffle Mayonnaise," she says that the difference between white truffles and black truffles and the difference between winter truffles and summer truffles is significant to the discerning diner. "Not everyone who reads the menu will know this," she says. "But those that do are informed."

Still, there are those who are satisfied with a basic meat-and-potatoes approach to menus. For $22 at the recently hatched Tasting Kitchen in Venice, Calif., for instance, you can get this: pork. polenta. leeks.