Accessibility links
Need Cash? Some Thieves Are Taking The Whole ATM Theft of automated teller machines is not common, but it is happening with greater regularity. Groups of thieves in some jurisdictions have stolen as many as a dozen machines before being caught. One pair of robberies near Dallas last summer yielded $250,000.

Need Cash? Some Thieves Are Taking The Whole ATM

Need Cash? Some Thieves Are Taking The Whole ATM 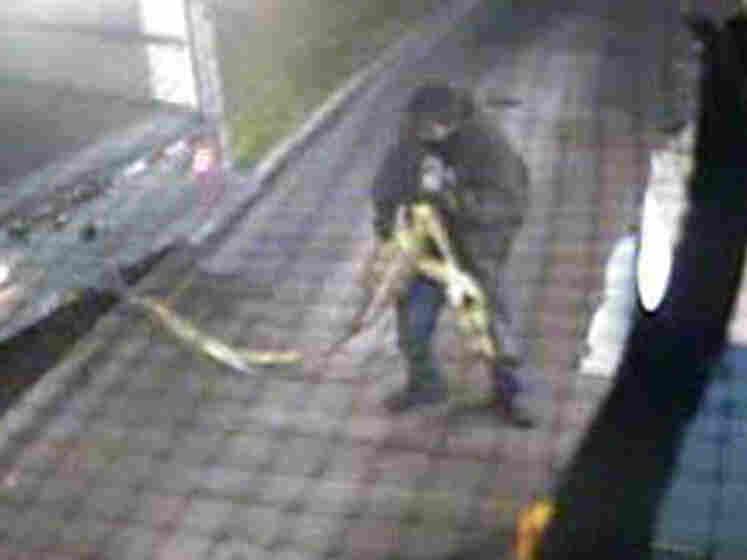 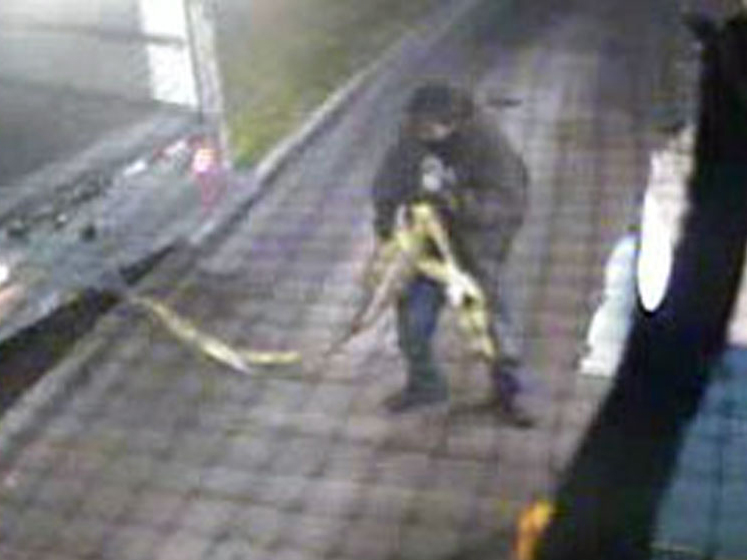 This Nov. 25, 2009, video image provided by the Boulder Police Department shows a suspected attempt to steal an ATM using a moving truck in Boulder, Colo. No money had been taken from the free-standing outdoor machine.

Probably anyone reading this story has taken money from an ATM. But few people have ever walked away with an entire automated teller machine.

Thefts of ATMs — the machines themselves — are not common but appear to be happening with more frequency. Four years ago, there were roughly 120 such thefts in the entire country. Two years ago, Texas alone exceeded that number.

The thefts tend to occur in clusters, with a group of thieves hitting multiple locations within a state or metropolitan area. Oakland saw four such thefts last month, while San Diego County experienced nearly twice that many in recent weeks.

Sometimes thieves come away with little money, or aren't able to remove an ATM from the bank island or convenience store they'd targeted. But other times, a single robbery can yield tens of thousands of dollars.

ATMs typically hold cassettes with room for 1,000 bills each. If you're talking twenties, ten cassettes add up to as much as $200,000. Usually they hold less, but all told, physical attacks on ATMs cost the industry $4.5 million annually in the U.S.

"The amount of money in some of these machines would blow you away," says Gary Akey, operations director with the Security Center in Dallas, a bank surveillance and security company.

Referring to a pair of robberies last summer in suburban Dallas that together yielded $250,000, Akey says, "That's a pretty good payday for a couple of minutes' work."

The methods ATM thieves use are not subtle. They may physically batter a bank island with a stolen truck, or drive through a convenience store window, then lasso the ATM with a chain and yank it away.

Often they will have stolen a second vehicle or forklift with which to cart the machine away. The getaway car often turns up later, burned.

"We do see banks targeted in the vicinity of construction sites," says Doug Johnson, vice president of risk management policy for the American Bankers Association. "Folks would find construction equipment or a backhoe that can dig the ATM out, theoretically."

ATM thieves can be quite brazen. Last September, a pair of thieves, armed only with a clipboard and a handcart, stole a credit union ATM from the second floor of a suburban Philadelphia hospital during visiting hours. Surveillance video showed them calmly waiting for an elevator while at least seven people walked past them.

Part of the attraction of stealing ATMs is that criminal penalties are much less severe than for bank robbery. Sticking up a teller might lead to federal charges, but breaking into an ATM is generally considered simple theft.

Capt. Rick Bounds, who oversees the burglary and theft division of the Houston police department, says that the logistical challenges involved in ATM theft keeps the crime fairly rare.

"Most of the time we find that criminals go after the quicker money or an easy opportunity to steal," he says.

But law enforcement officials take note when a rash of ATM thefts breaks out within their area. Every agency in San Diego County currently has a detective tracking the spate of crimes and sharing information about them.

On Thursday, a Sioux Falls man was indicted for his alleged role in a half-dozen ATM robberies and robbery attempts, having been captured through the cooperative efforts of four police and sheriff's departments.

"We had a few people that were working in groups," says Senior Cpl. Janice Crowther of the Dallas police department. "Once we were able to infiltrate the groups, the number of incidents has come down greatly."

Some merchants and banks are trying out new precautions. A device called the Raminator — basically, a pair of steel plates that help keep machines bolted in place — has helped bring down the number of ATM thefts in Australia, which had a huge problem with them a few years ago, by 95 percent.

But such equipment is expensive. And GPS tracking devices or ink cartridges only help after a robbery has occurred.

Johnson, the risk management specialist with the bankers association, says banks in more vulnerable locations are taking special precautions. But many companies that "deploy" ATMs simply take steps that would be useful in preventing almost any type of crime, such as putting up barriers or improving lighting.

Some convenience store owners, who are occasionally targeted multiple times, have moved their ATMs deeper into their stores. Retailers are insured for the loss of the machine and the cash stolen, but they also have to worry about cleaning up their stores and restoring customer trust.

Only a few, however, are getting rid of ATMs altogether. "It's less about the money you make by having the ATM and really about the customers you gain," says Jeff Lenard, spokesman for the National Association of Convenience Stores.

"The ATM's job is to give the customer money — and the rest of the store is designed to give customers a chance to spend the money."