Accessibility links
The Fugs: At The Forefront Of The Counterculture Led by poets Ed Sanders and Tuli Kupferberg, the garage-rock band The Fugs became a pivotal player in the American underground of the mid- to late '60s. The group retired in 1969 but re-formed in the mid-'80s and has performed and recorded regularly ever since. The band is set to release what could be its last album. 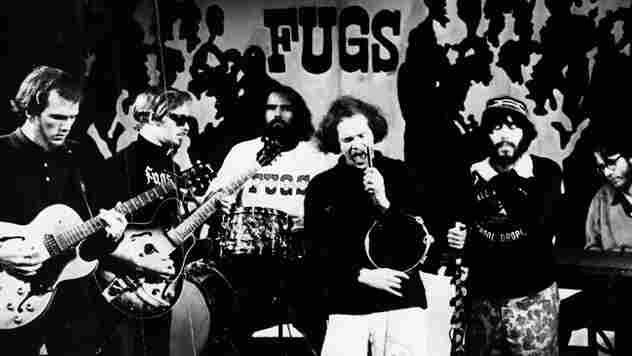 The Fugs helped lead the underground scene of the 1960s. Courtesy of the artist hide caption

The Fugs' CDs are available from the band's Web site.

In 1964, a band called The Fugs surfaced on the Lower East Side of Manhattan. Led by poets Ed Sanders and Tuli Kupferberg, The Fugs became an important part of the American counterculture of the mid- to late '60s. The group retired in 1969, but re-formed in the mid-'80s and has performed and recorded regularly ever since. The Fugs will soon release what could be the band's last album, titled Be Free.

The Fugs' name comes from a euphemism in a Norman Mailer novel. Like the word's source, much of the band's music can't be heard on the radio. It sang raunchy songs about sex and drugs. One Fugs tune that did get FM radio play, "Kill for Peace," was about the war in Vietnam.

"We were not the Mormon Tabernacle Choir," co-founder Sanders says of the group's controversial lyrics. "We were not The Beach Boys. We were The Fugs. And we had our own pizazz and energy and elan, especially early on. Those old records just scream and steam with fun and joy and raising our fists to the sky to demand a new type of American reality."

That new reality grew out of the anarchy of the beats at a time when The Beatles were singing "Yesterday." Author Larry "Ratso" Sloman was a straight-laced college student when he caught The Fugs playing at a small Greenwich Village theater in 1965.

"To hear these proscribed topics talked about so freely, and to hear that kind of vulgarity, was mind-boggling. Just a great, liberating experience to be able to hear drugs discussed," Sloman says. "And it was just kind of putting up a mirror to the emerging counterculture."

"The Fugs were right on the barricades of what was possible," says Danny Goldberg, a longtime music-industry executive and author of two books about popular culture. "There was a fearlessness, an intensity, an unwillingness to pander to any commercial norms that was very exciting."

Somehow, The Fugs were embraced by a big commercial label — and not just any label, but Reprise Records, founded and run by Frank Sinatra.

"Sinatra had to approve all the signings," Willner says. "So Joe Smith and Mo Ostin put the tape on. I'm not sure what song. And Sinatra listened to The Fugs and went, 'Well, I guess you guys know what you're doing. Go ahead.' Man, I wish someone would do a scene of that."

Willner produced a benefit concert for Kupferberg, who is 86, blind and confined to his Manhattan loft after suffering a stroke last year. Yet Kupferberg still records short videos that can be seen on YouTube, through which he dispenses pearls of wisdom to his fans. An example: "Hi, folks! It's time for your daily proverb. Beware a man who is not moved by sound. He'll drag you to the ground. He'll drag you to the ground!"

Kupferberg doesn't perform with The Fugs anymore, but he did record tracks for the band's new album in his apartment.

"I am an artist for art's sake," he says of his continuing work with the band. "It was God who gave me my big break. I was born for a higher reason, and all his angels I am pleasin'. I am an artist for God's sake."

While Kupferberg was known for putting new words to old music, Sanders has a penchant for setting old verse to new melodies, as in his adaptation of the "The Laughing Song" by English poet and painter William Blake: "When the painted birds laugh in the shade / Where our table with cherries and nuts is spread / Come live, and be merry, and join with me / To sing the sweet chorus of Ha Ha Hee."

Both Sanders and Kupferberg are published poets, and Sanders is the author of a best-selling account of the Manson family. Yet he says he remains proud of his life as a Fug.

"It was the '60s, and it was like there was a big ribbon around what was acceptable and that ribbon was cut," Sanders says. "So we found a niche inside that. We fit in in our own strange way for a few years."