Accessibility links
Backpacked Birds Reveal Who's The Boss Using lightweight GPS devices in tiny backpacks strapped to homing pigeons, researchers have figured out who is calling the shots when birds fly in flock. Every bird gets a vote, but the weight of its vote depends on its rank in the flock hierarchy. In the study, miniature GPS loggers weighing just 16 grams were fitted into custom-made backpacks carried by flocks of up to 10 homing pigeons. Courtesy of Zsuzsa Akos hide caption 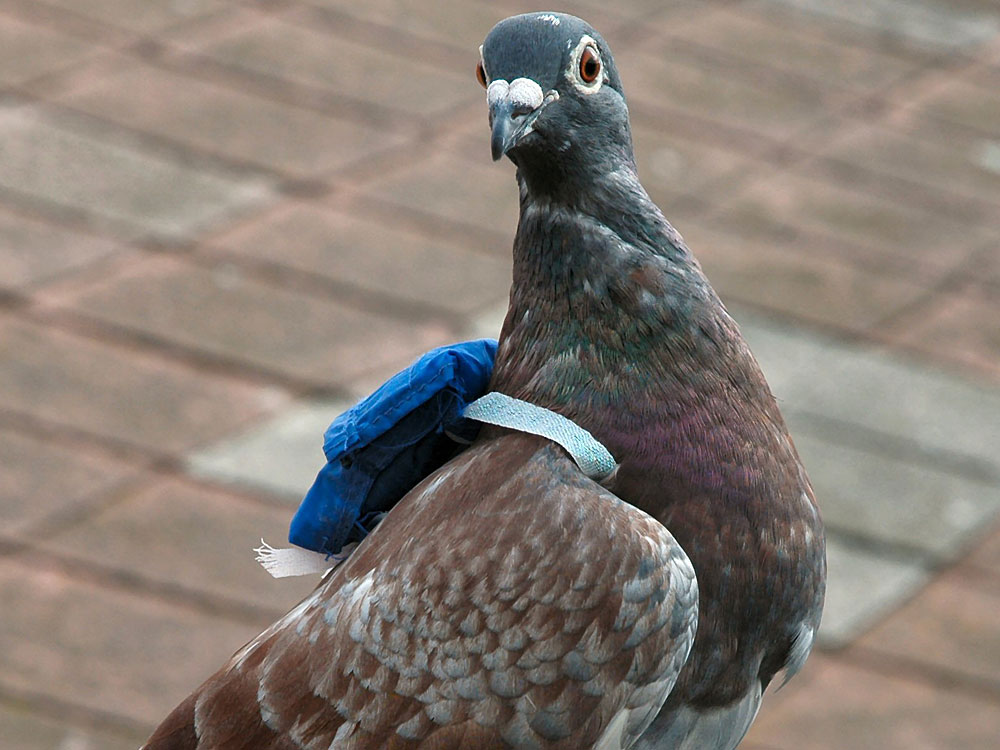 In the study, miniature GPS loggers weighing just 16 grams were fitted into custom-made backpacks carried by flocks of up to 10 homing pigeons. The GPS loggers in the birds' backpacks yielded data that showed that the flock flew in a clearly established hierarchy. Courtesy of Zsuzsa Akos hide caption 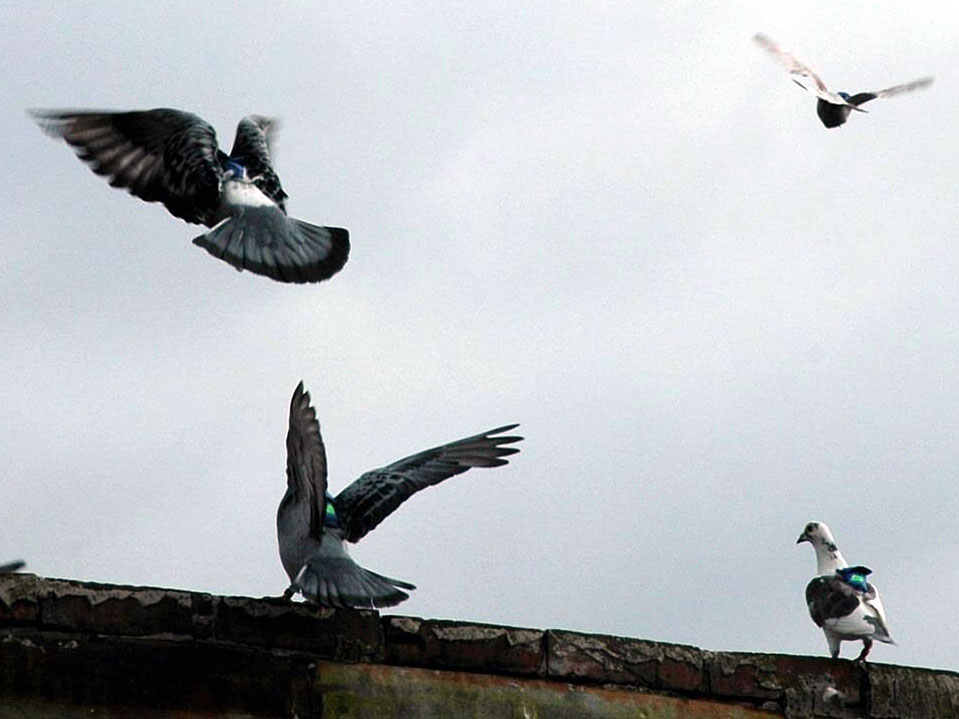 The GPS loggers in the birds' backpacks yielded data that showed that the flock flew in a clearly established hierarchy.

Some birds have more influence than others when it comes to controlling a flock's soaring flight, according to a new study of homing pigeons that wore little backpacks equipped with GPS devices.

Each custom-made backpack had straps fitted around the bird's wings. The GPS device tucked inside weighed only about half an ounce, but could record shifts in the bird's position five times per second.

That kind of precise tracking allowed researchers to analyze subtle interactions between birds in flocks of about 10 homing pigeons.

The flocks either flew freely around their loft or were taken about nine miles away and released, so that the birds could find their way home.

Without the GPS tracking, it would have been impossible to figure out who was leading the flock just by watching the birds as they veered through the air, says Dora Biro of the University of Oxford in the U.K.

"If you tried to work out who it is within the flock who's making the decisions about, you know, what the flock should do from one moment to the next, it's very difficult to actually see this," says Biro, "because the decisions that are made and that spread through the group are made at such short time scales that it's really not visible easily to the naked eye."

And don't assume that birds in the front are the leaders, she says, because "birds have a very wide angle of vision, so for them, it is possible that they would be responding to birds who are flying behind them."

The GPS data, however, allowed Biro and her colleagues at Eotvos University in Hungary to detect clear leader-follower relationships within the flock.

Some birds had more followers than others. This demonstrates a hierarchy of influence within the flock. "You can actually rank birds in terms of the influence that they have on others within the group," Biro says. "Basically every individual gets a kind of a vote in what the flock does, but the weight of your vote depends on your rank, your position in the hierarchy."

And it did turn out that highly influential birds tended to fly out in front, according to a report on the study in the journal Nature.

Biro isn't sure what qualities make a bird a leader in the air — maybe some birds just fly faster or have a better sense of direction — and she says that's something she'd like to investigate further.

For decades, researchers have tried to understand the dynamics of flocks of birds, schools of fish and other groups of animals, in order to understand how these creatures are able to rapidly make collective decisions. Some computer models of flocks assume that all the birds are essentially equal, and are all following the same set of simple rules.

But as this study shows, "individual differences really matter. And that's what people are beginning to realize," says Iain Couzin of Princeton University. Couzin studies collective decision-making in animals. "And so I think this work sort of paves new ground."

He says that until recently, the technology hasn't existed that would allow researchers to track the behavior of individuals within a large group of animals, although some researchers have been able to do things like tag fish and then videotape their movements within a school.

"Birds have famously been known for their hierarchies of dominance," says Couzin, who notes that bird groups often have obvious "pecking orders" on the ground that control which birds get to eat first or roost in favored spots. He says this new study shows for the first time that "another type of hierarchical organization actually emerges through the very complex and intricate dynamics of flocking."