Accessibility links
Arizona Closes State Parks, And Fears Of Looting Rise With five state parks closed because of money problems, community groups and former park employees are working to protect the sites from looters. A particular concern is Homolovi Ruins State Park, where fragile Hopi archaeological sites were pillaged in the 1970s. 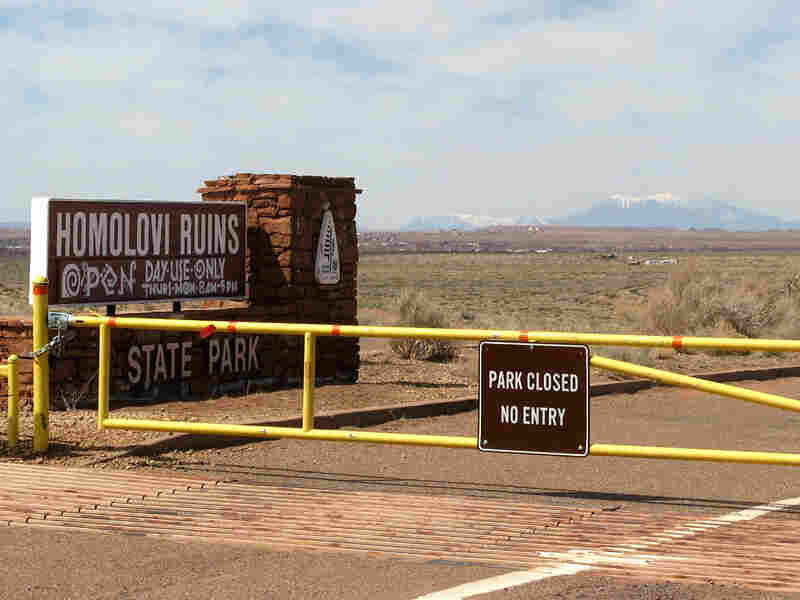 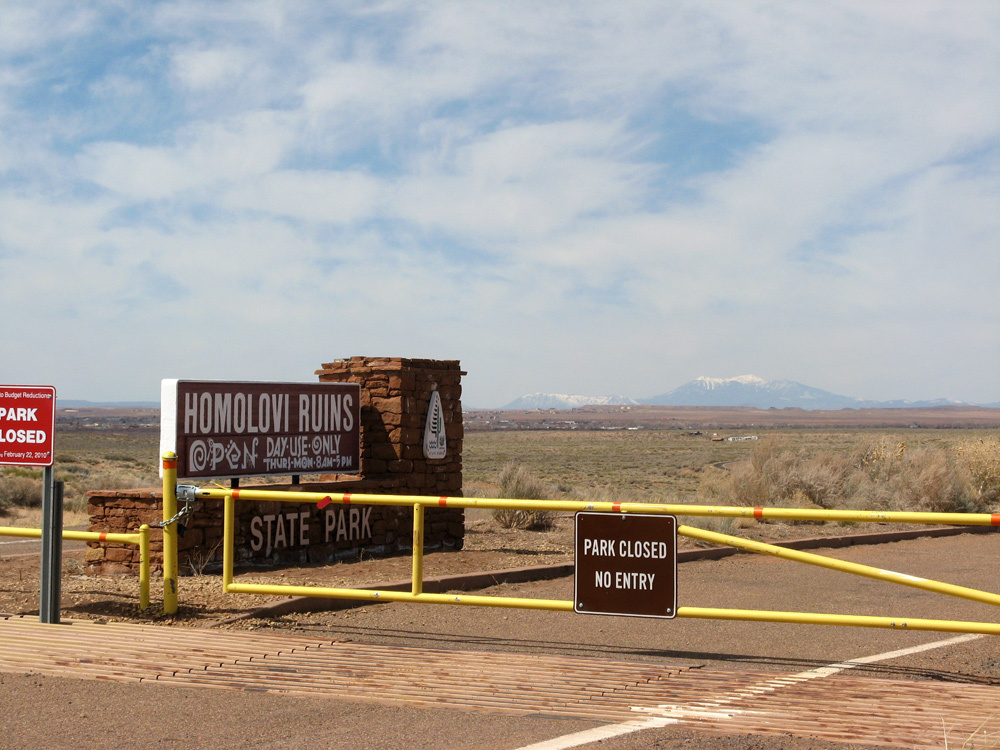 Homolovi Ruins State Park is one of five Arizona parks that closed in February, casualties of a state budget crunch. Lawmakers are expected to consider more closures this summer.

As states across the country scramble to close budget gaps, many are targeting state parks. Arizona is the first to go through with it. In February, the state closed five of its 30 parks, and a number of them contain fragile archaeological sites. Now residents are taking steps to prevent looting.

On a clear, calm day, Homolovi Ruins State Park has one of the best views in northern Arizona. To the north are the red-rock mesas of the Hopi Nation. To the west, the Little Colorado River and snowcapped San Francisco Peaks.

Susan Secakuku, a former archaeologist at Homolovi and a member of the Hopi tribe, says it's hard to believe visitors are no longer allowed to see this stunning view from inside the park. They're also not allowed to see the archaeological treasures that are found there.

"There's a lot of beautiful pottery, there are burial plots," Secakuku said. "We as the Hopi tribe are very concerned about the protection of the place first and foremost, and that's kind of the scary part right now."

Drop In Support For Rural Parks

Arizona closed Homolovi earlier this year, along with four other state parks. In the past three years, the Legislature has cut state-park funding by roughly 80 percent. About half of all the state's park employees have been laid off.

That has led volunteers and nonprofit groups to step in. The Arizona Historical Society is paying to keep a historic mansion in Flagstaff open temporarily. And the city of Camp Verde is doing the same with a historic fort. Even individuals are getting ready to pitch in at some of the state's shuttered parks.

"The state of Arizona has very active volunteers," said Karen Berggren, who has managed Homolovi since it opened 23 years ago. "You know, when your money is swept and you have nothing to pay people with, that makes it a little difficult to keep things open."

This week, when she's laid off from her job, Berggren will become an on-site volunteer, continuing to keep watch over the park — but without a paycheck.

"What we find is that the historic parks, the educational parks, the rural parks, they just don't produce enough revenues, they don't have something that attracts people every weekend like the fishing areas do," Berggren said. "But, they're treasures. You know, we don't want to lose those treasures."

Homolovi stands to lose a lot if it remains closed. Home to more than 500 ancestral Hopi sites, the area has been ravaged for centuries by looters searching for relics to sell on the black market. The worst of it was during the 1970s, about a decade before Homolovi became a state park.

"It was essentially being mined — like, looted on a daily basis. They were hitting it with backhoes," says Robert Breunig, director of the Museum of Northern Arizona in Flagstaff.

"Our concern is that we're going to go right back to the Wild West days of the '70s that we saw," he says. "That's not what the state of Arizona ought to be doing with its heritage."

The state has agreed to pay one law enforcement ranger to patrol Homolovi, and a slew of volunteer groups will visit the site regularly. But there's only so much volunteers can do.

Earlier this month, the Arizona Legislature shot down a proposal to impose a mandatory surcharge on motorists that would help pay to keep state parks open. In June, lawmakers are expected to issue another list of parks slated for closure. This time, as many as 13 may be shut down.