Accessibility links
How Gut Bacteria Evolved To Feast On Sushi When the first people settled in Japan, they couldn't digest a new food source — seaweed. But not long after, a beautiful microbial relationship began. 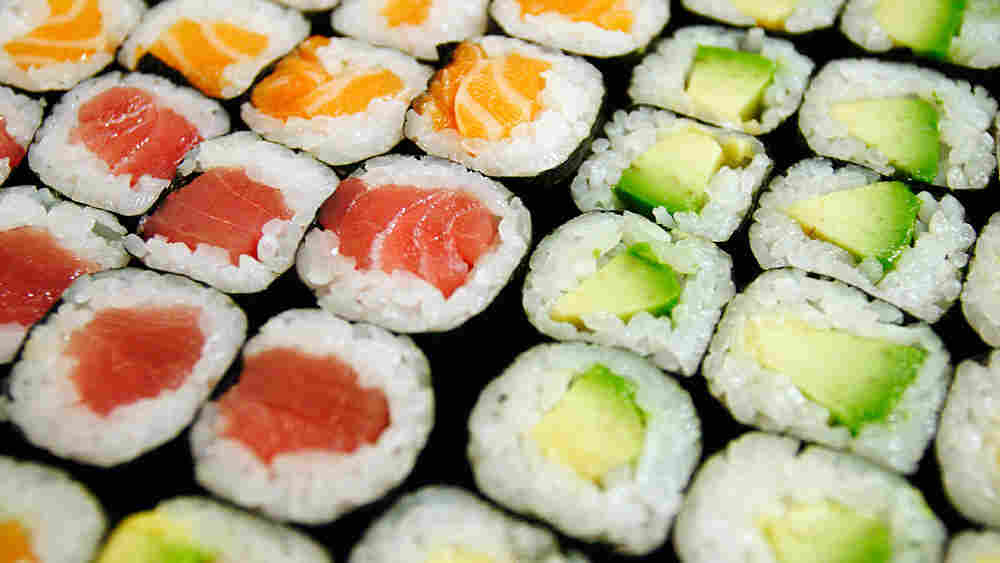 About 40,000 years ago, bacteria in the stomachs of Japanese people evolved to digest nori, the seaweed that's used to wrap maki rolls. But the average person from North America doesn't carry this version of the microbe. iStockphoto.com hide caption

Some people will do a lot for sushi.

But at least one bacterium appears to have actually altered its genetic code in order to feast on an ancient version of the maki roll, scientists report in the journal Nature.

The bacterium, Bacteroides plebeius, lives in the human gut, along with trillions of other microbes. And like many gut bacteria it has acquired genetic sequences that allow it to produce lots of different digestive enzymes.

But B. plebeius apparently did not have an enzyme capable of digesting seaweed 40,000 years ago, when people first began to arrive in the Japanese archipelago, says Jan-Hendrik Hehemann, the paper's lead author and a researcher at the University of Victoria in British Columbia, Canada.

There was no need, because it appears "their continental ancestors ate only higher plants," Hehemann says.

On the islands, though, seaweed became a part of the diet. "And the bacteria in the gut had an incentive to access carbohydrate substrates that were present in the seaweed," says Justin Sonnenburg, assistant professor of microbiology and immunology at Stanford University School of Medicine.

How B. plebeius solved that problem might still be a mystery had Hehemann and a team of scientists not been studying a bacterium that lives in the ocean and is often found on a type of red seaweed.

It's the seaweed called nori that's used to wrap some sushi, including maki rolls.

When Hehemann tested some of the genes from this bacterium, he found that, as expected, they made special enzymes to break down nori.

And once the team knew what genes to look for, Hehemann says, it started to poke around in genetic databases to see how many other bacteria carried the same genes.

Not surprisingly, nearly all the bacteria the researchers found live in the ocean, Hehemann says.

The exception was a strain of B. plebeius found in the guts of people in Japan.

The team immediately realized what must have happened, Hehemann says.

When people in Japan began eating seaweed with their rice and fish, they also ingested some bacteria from the ocean. And as these ocean bacteria passed through the intestine, they exchanged bits of genetic code with the gut bacteria.

Bacteria actually do this sort of gene transfer all the time. It provides them with a sort of evolutionary overdrive, Hehemann says.

"This can happen really quickly," he says. So a bacterium that can't digest nori one day, can the next.

This sort of digestive evolution has probably helped humans adapt to lots of new environments and lots of new foods.

Unsurprisingly, bacteria in North American guts don't have the genes to break down seaweed, which means the body can't get calories — energy — from it. And these bacteria probably never will, even if sushi becomes a staple in North America, Hehemann says.

That's because these days, seaweed is roasted before it's used to wrap a maki roll, so the bacteria are dead long before they reach your gut.

And so are the bacteria in most foods in industrialized countries, Sonnenburg says.

Sonnenburg says that could be a problem for humans because gut bacteria help us digest new foods, modulate our immune systems, and even ward off some diseases.