Accessibility links
Coleslaw: You Could Be a Star Relegated to a side dish, coleslaw is frequently forgotten until the very last moment of picnic prep, picked up last minute, and then promptly ignored. No more. Deb Perelman offers tips for turning your coleslaw from bland to glam.

Coleslaw: You Could Be a Star

Coleslaw: You Could Be a Star 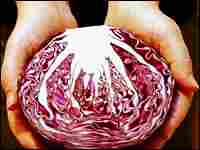 Give the author some cabbage and she'll whip up coleslaw that's a standout at any summer meal. Deb Perelman for NPR hide caption 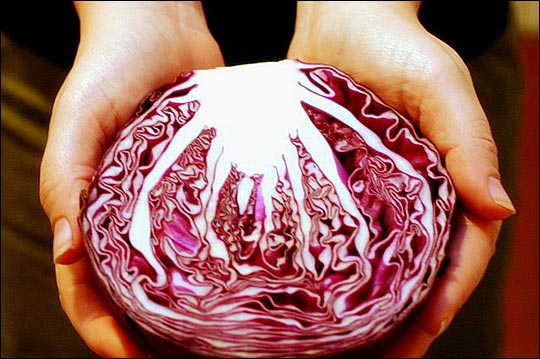 Give the author some cabbage and she'll whip up coleslaw that's a standout at any summer meal.

Deb Perelman writes about food, technology and the daily grind in New York City. Her cooking blog, Smitten Kitchen, was the recipient of a 2006 Food Blog Award in the Humor category.

Coleslaw has lost its way. Relegated to a side dish, it is an afterthought and frequently forgotten until the very last moment of picnic, barbecue or beach blanket prep.

At that point, a bucket of something white and listless is grabbed from a grocery store shelf, and set out aside a spread of carefully prepared food where it is largely ignored.

But it wasn't always this mundane. Its origins can be traced back as far as the ancient Romans, who served a dish of cabbage, vinegar, eggs and spices. The Dutch who founded New York state grew cabbage around the Hudson River that they used in a shredded cabbage salad they called koosla (kool means cabbage and sla is salad).

Both the vinegar- and mayonnaise-based varieties of coleslaw appear to have a long history in this country. A recipe in The Sensible Cook: Dutch Foodways in the Old and New World, made by the author's Dutch landlady in 1770, mixes thin strips of cabbage with melted butter, vinegar and oil. Since mayonnaise was a mid-18th-century invention, coleslaw as we most commonly know it is only about 250 years old.

By my own tastings — and hoo boy, have I tested a lot of coleslaw this summer — there are a lot places where modern-day coleslaw can go awry. Often, it is sopped with such a heavy helping of dressing, the cabbage flecks are left to swim in their sauce rather than be mellowed into a cohesive flavor by it. This situation is worsened by Slaw Flaw 2, in which the salad ingredients are left too long in their dressing, and become soggy and limp.

With rare exceptions (such as the pickled slaw below, where a long lead time is best), coleslaw does not get better with age, rendering almost all store-bought varieties inferior to the crunchy, bright flavors from the home kitchen.

Not only did we stop making coleslaw at home, we stopped innovating when we did. Today, you are equally likely to be invited to a Korean, Southwestern or New American-style backyard barbecue. Even the potato salad at these parties will be updated with olives, radishes or curry powder. But we're still just mulching cabbage and carrots with unseasoned mayo for the coleslaw.

It doesn't have to be this way. The average U.S. supermarket has up to four, if not more, varieties of cabbage: the featherweight Napa, its rounded sister Savoy, the classic green — which is dense and actually white inside — and purple and white mille feuille-ed "red" varieties. When you're looking to step up your next slaw, try a different type of cabbage, but don't stop there.

Add matchsticks of seasonal fruit to freshen up a classic slaw; try pears in the fall or sturdy peaches in the summer. Herbs — fresh thyme, rosemary, dill — can bring a classic slaw into the modern age with ease.

Even unusual extras such as nuts, dried fruits, spices or hearty lettuces such as iceberg and frisee can transform a dull slaw with minimal effort.

And whether you choose crumbles of Cabrales, cubes of ricotta salata or coarse gratings of Parmesan, nobody complains when you update a dish with cheese.

There are also innumerable ways to refocus a slaw in homage to a worldly cuisine. Add some cilantro, cumin and green or jalapeno pepper for a Tex-Mex style party. Coriander, fennel seeds, curry powder and onion would be perfect for an Indian potluck. Glass noodles, seedless cucumber and firm-ripe mango with a cayenne, lime and rice vinegar dressing could transform an ordinary slaw into something resembling an inside-out Vietnamese summer roll. Or try dill, slivers of new pickles and minced garlic for a slaw that plays on Eastern European flavors.

Forgettable coleslaw, your days are numbered. 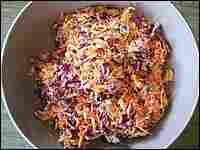 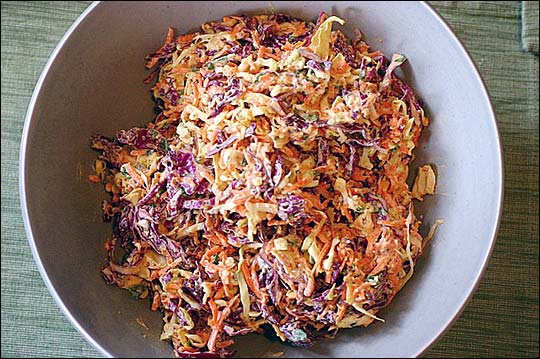 Whether you eat this as a side dish, or pile it atop your hamburger at a cookout, you'll wonder why you never thought of this before. This recipe is adapted from Ina Gartens Barefoot Contessa at Home (Clarkson Potter 2006).

Cut the cabbages in half and then in quarters and cut out the cores. Set up the food processor with the slicing blade and place the pieces of cabbage, one at a time, lying horizontally in the feed tube. (If they don't fit, cut them to fit lying down.) Place the feed tube pusher on top and turn on the processor. Don't push on the feed tube pusher or the slices will turn out too thick. Continue with the remaining red and green cabbage quarters. Transfer into a large bowl, discarding any very large pieces. Before you pour the dressing on the salad, save a handful of the grated vegetables to decorate for serving.

Change the slicing blade for the large shredding blade and cut the carrots so they also lie down in the feed tube. Since the carrots are hard, replace the feed tube pusher and press firmly with the food processor on. Add to cabbage.

In a medium bowl, whisk together the mayonnaise, both mustards, vinegar, celery salt, kosher salt and pepper. Pour enough mayonnaise dressing over the grated vegetables and toss to moisten well. Add crumbled blue cheese and parsley and toss with vegetables. Cover the bowl with plastic wrap and refrigerate for an hour or more to allow the flavors to meld. Serve cold or at room temperature. 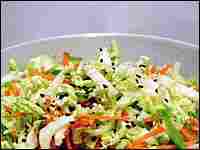 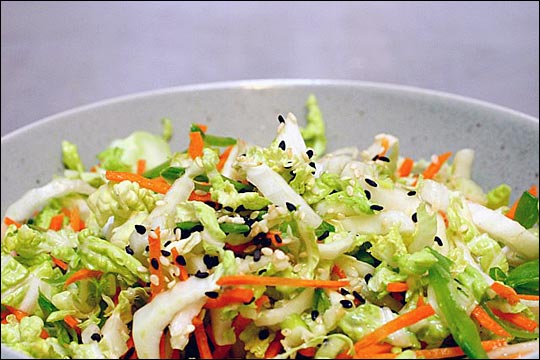 Wasabi imparts a Far Eastern flavor, and black and white toasted sesame seeds add a decorative touch to this slaw. No mayonnaise means it won't spoil during a long day at the beach. This recipe is adapted from Bobby Flay's Boy Meets Grill (Hyperion 1999).

4 green onions (white bulb and 3 inches of green), finely sliced on the bias

Combine the wasabi powder and water in a small bowl. Whisk in the garlic, ginger, lime juice, vinegar, oil and honey, and season with salt and pepper.

Combine the cabbage, carrots, green onions and snow peas in a large bowl. Add the dressing and coat well. Season with salt and pepper and sprinkle with the sesame seeds. 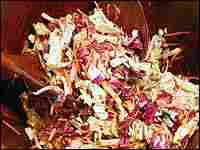 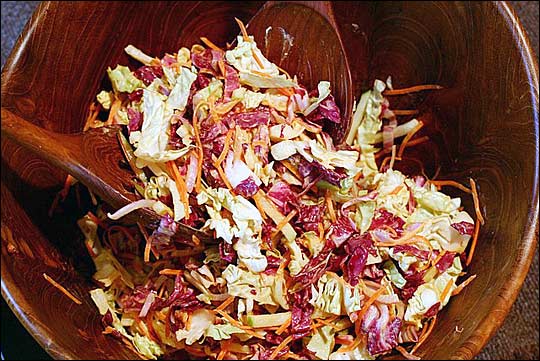 With a fierce kick from smoky spices, this "salad-style" slaw is anything but ordinary, and would be as welcome on your Thanksgiving table as it could be with a weekday night meal.

Combine the radicchio, cabbage, carrot, apple, onion and pecans in a large bowl. Mix well with your hands and set aside.

In a small bowl, stir together the mustard, sugar, paprika, mayonnaise and lemon juice until blended. Season with salt and pepper.

Pour the dressing over the cabbage mixture and toss well to coat. Taste again for seasoning, then mound onto a platter. 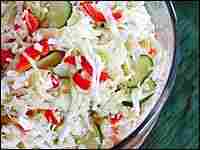 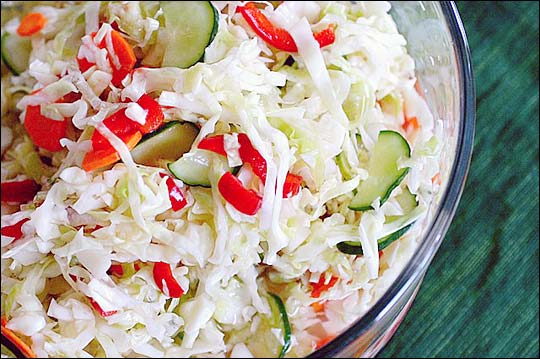 This slaw was modeled after the Health Salad I fell in love with at Zabar's in New York six years ago. Once I realized my three weekly containers were cutting into my rent money, I tried to re-create it at home. Not only is it economical, like most pickled foods it gets better with age — crunchier, brighter and even more refreshing.

Bring brine ingredients to a boil in a 2-quart nonreactive saucepan over moderate heat, stirring until sugar is dissolved. (Use a pan of stainless steel, glass and enameled cast iron; avoid pure aluminum and uncoated iron, which can impart an unpleasant taste to recipes with acidic ingredients) Transfer to a 3- to 4-quart nonreactive bowl and cool completely. To speed this process up, you can set the bowl over a second bowl of ice water, and stir, which will quickly chill the brine.

Halve, core and halve again the head of cabbage, then finely slice it with a knife, or run the quarters through a food processor fitted with a slicing blade.

Toss sliced cabbage, bell pepper, carrot and cucumber in bowl with brine. Cover with lid or plastic wrap, and refrigerate, tossing the ingredients once or twice in a 24-hour period. After one day in the brine, the coleslaw is ready to serve. It keeps for up to 1 week, chilled.