Accessibility links
Odd Fossil May Be Human Ancestor, Or Dead End The bones of two creatures who lived nearly 2 million years ago have been discovered in South Africa. The creatures, which bear resemblance to both the early human Homo genus and the more primitive Australopithecus genus, could unlock clues about evolution and the origins of humans.

Odd Fossil May Be Human Ancestor, Or Dead End

Odd Fossil May Be Human Ancestor, Or Dead End 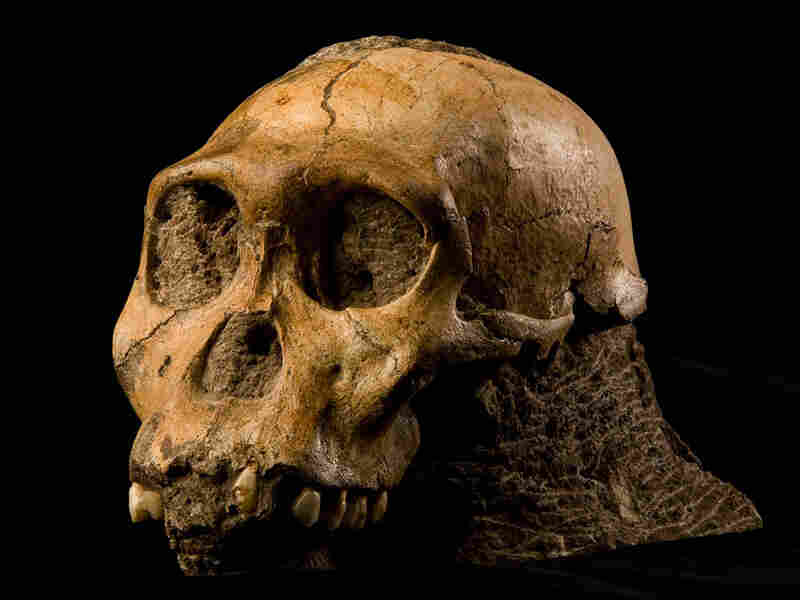 The cranium of a creature who lived around 2 millions years ago, and was probably between the ages of 9 and 13 when it died. Scientists say this new species, Australopithecus sediba, may be a direct human ancestor. Brett Eloff/Courtesy of Lee Berger and the University of the Witwatersrand hide caption 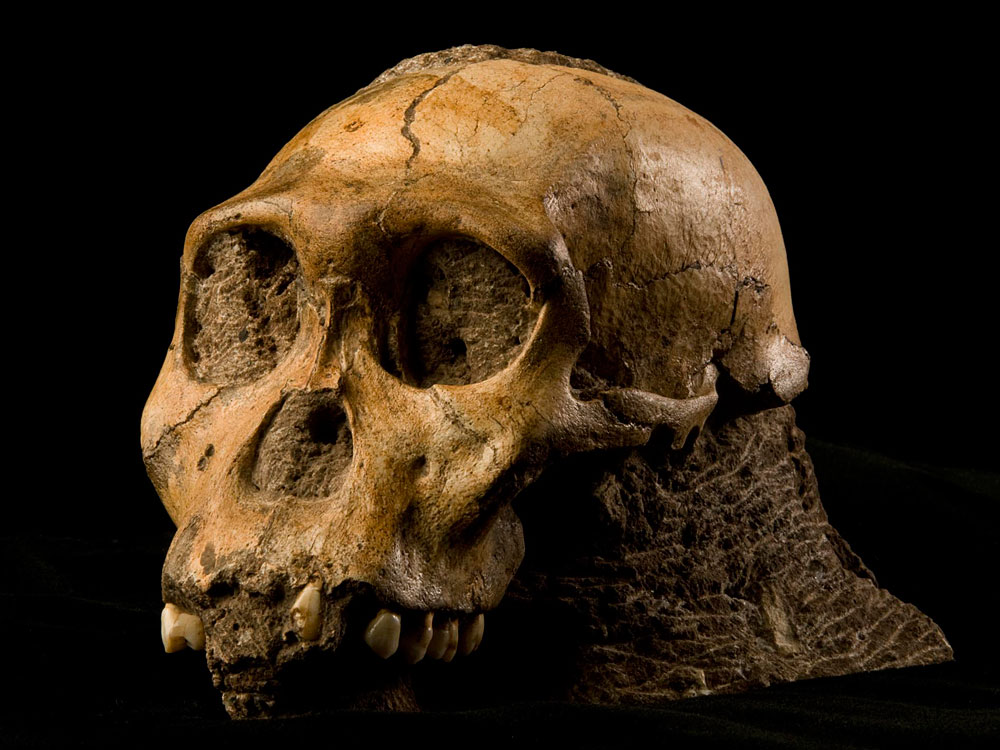 The cranium of a creature who lived around 2 millions years ago, and was probably between the ages of 9 and 13 when it died. Scientists say this new species, Australopithecus sediba, may be a direct human ancestor.

Video Of The Juvenile Cranium

A remarkable new discovery near Johannesburg, South Africa, has come to light: the bones of two creatures that lived nearly 2 million years ago.

Scientists are trying to sort out whether they might have been direct ancestors of humans or an experiment in evolution that disappeared.

The partial skeletons belong to a juvenile about 9 to 13 years old and a female in her 20s. They were found in what once was a deep cave, where they probably died.

Scientists call them Australopithecus sediba — a new species. The famous fossil Lucy, found in 1974, was a different form of Australopithecus. Scientists suspect some form of this genus evolved into the very earliest humans, the Homo lineage.

Anthropologist Lee Berger, from the University of the Witwatersrand in South Africa, suspects these creatures could be the one.

"It does look like a good candidate ancestor of early Homo," he says, because their skeletons are such a bizarre mix of primitive and modern.

They had long, apelike arms and tiny brains. But parts of the skull and the small front teeth are more like early humans such as Homo erectus. They also walked upright with a long stride. Berger, who led the scientific team, says the skeletons just aren't like anything in the human or pre-human fossil record.

"The lower limbs are incredibly surprising," says Berger. "The pelvis is very advanced, very similar to what we see in Homo erectus and Homo sapiens with long legs. It's a real mixed bag, and how it's going to fit into that is really the question that's going to come out in the next months and years."

At 2 million years ago, they lived just after the time when the earliest humans are thought to have evolved. "The fossil record tells us that we transitioned between early Australopithecines like the Lucy fossils," Berger says, "which are bipedal — but they don't walk the way we do, they have longer arms than we do, they have more primitive faces and heads than we do — to something that is very close to us."

Now, finding the ancient species that led directly to humans is kind of like finding the golden fleece. Anyone who makes that claim faces some stiff questioning from other scientists, such as Bernard Wood at George Washington University. 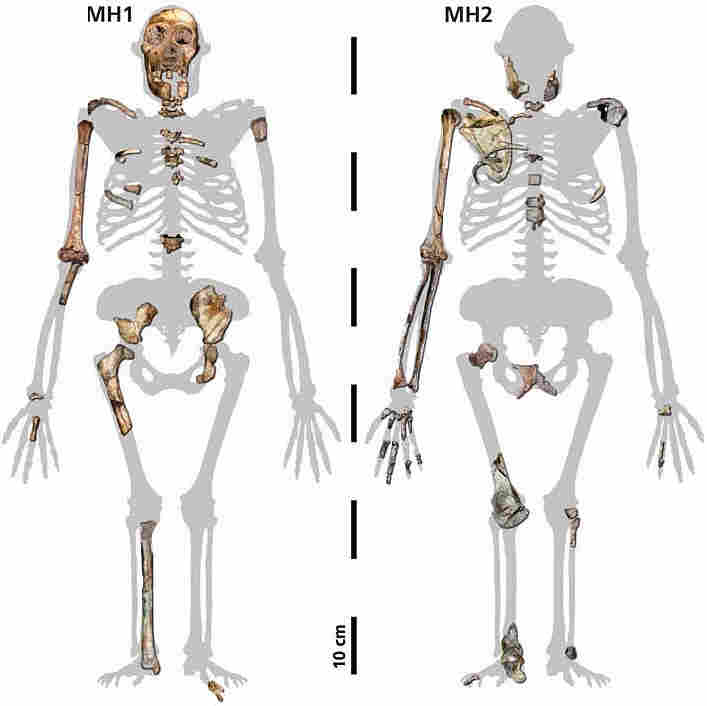 The fossil pieces from the two creatures are superimposed over the skeleton of Australopithecus africanus. Scientists think these new fossils are descendants of A. africanus. Courtesy of Berger et al/Science hide caption 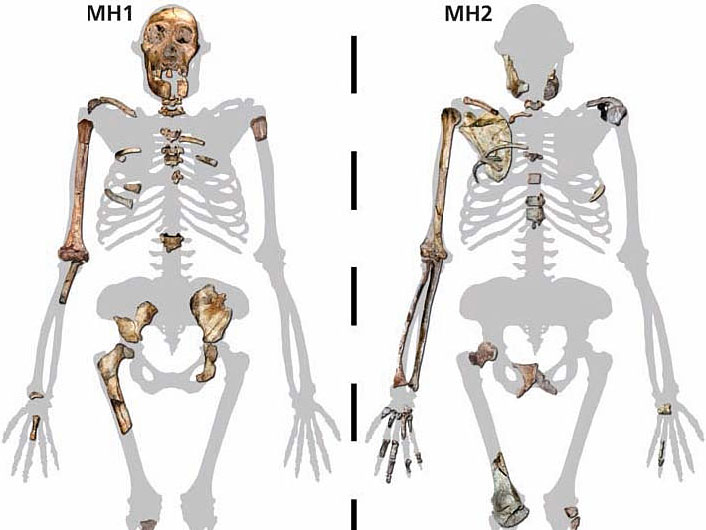 The fossil pieces from the two creatures are superimposed over the skeleton of Australopithecus africanus. Scientists think these new fossils are descendants of A. africanus.

Wood says the South African fossils look more like something from Lucy's tribe than early human ancestors. "The particular mix that this one has, the particular type of mosaic, I think probably is unusual," he says. "We need to find out a bit more to know whether it's really different enough to deserve its new species."

Even if it is a new species, Wood says there's not enough evidence yet to claim that the species was a rung on some sort of evolutionary ladder that led to us.

The evidence from the new creature, Wood says, is more in keeping with a bush analogy than a linear ladder analogy.

"There are lots of twigs on this bush going up toward the light," he says. "One of them actually reaches the surface of the bush, which is the present day, and that's the one that eventually leads to modern humans."

Wood says these creatures may have been on an evolutionary twig well removed from the human branch, one that simply died out.

Scientists agree though that it's an exciting discovery regardless of where these creatures fit on the tree of life. Wood says it could mean that upright walking might have evolved more than once among different species.

Berger published the findings in the journal Science. He says at the very least, the fossils should help sort out the tangled history of human evolution. "We've got that whole package there to look at," he says. "And maybe can begin to define what belongs within the genus Homo, and what doesn't."

It was Berger's 10-year-old son who found the first skeleton, in what could be the high point of his young career.

"Matthew wants to be a paleoanthropologist," Berger says. "It is going to be a hard discovery to beat, I hope he does. Thank goodness I found the second one, otherwise I wouldn't be able to live at home, would I?"

And now, Berger says, they've found a third and fourth skeleton, still to be dug out.