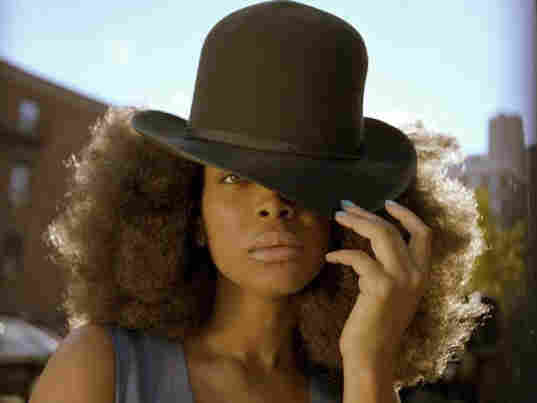 Songs From The Album

When Erykah Badu first hit the scene in 1997, she was a 26-year-old, head-wrapped in an older, earth-mother vibe. It was an anomalous combination; she sang with the kind of cadence and inflection you'd expect from a blues or jazz warbler, and her songwriting felt old-fashioned, too — revisit "Apple Tree" from Baduizm — especially compared to younger contemporaries such as Brandy or Monica.

But Badu had also been an aspiring rapper at one point, and she understood how a clever turn of phrase and measured sprinkling of slang served as an inside wink to hip-hop listeners who might have otherwise found her mellow neo-soul sound too "soft." Mary J. Blige asserted herself as the "queen of hip-hop soul" mostly by singing with rappers and hiring hip-hop producers, but Badu didn't just "sing over beats." She conveyed a B-girl attitude that rap fans could implicitly grasp. As the phrase goes: Game recognize game.

In the 13 years since her debut, Badu has taken her own game in different directions, including on the brilliantly quirky 2008 album New Amerykah Part 1 (4th World War), a politically charged, Afro-futuristic album coated with a cobalt-blue digital sheen. In contrast, New Amerykah Part 2 (Return of the Ankh) feels much like a full-circle return to the era in which Badu began. Most obviously, on songs such as "Turn Me Away (Get MuNNY)" and "Fall in Love (Your Funeral)," she knowingly drops musical and lyrical references to '90s rap hits such as Junior M.A.F.I.A.'s "Get Money," The Notorious B.I.G.'s "Warning" and Common's "A Penny for My Thoughts."

But beyond just the homages, the album's producers — Badu, Karriem Riggins, James Poyser, 9th Wonder, Madlib and others — owe much to a distinctly analog, '90s hip-hop aesthetic, which was itself inspired by the lush production of '70s R&B, all awash in electric keys, acoustic strings and disco bass lines. Across 50 minutes, New Amerykah Part 2 grooves rather than grills; the fact that its most energetic song, "Gone Baby, Don't Be Long," is built from a late-'70s single by Wings ("Arrow Through Me") tells you all you need to know.

The music's inviting warmth complements Badu's persona, summed up by the opening line from "Out of My Mind, Just in Time": "I'm a recovering / undercover / over lover." The play of rhymes and words recalls something out of the Rodgers and Hart songbook, and Badu delivers it with enough coyness and vulnerability that it simultaneously melts and breaks your heart. The entire album is dressed with a classic romanticism; excepting a few studio-room outtakes/interludes, New Amerykah Part 2 is all love songs — or, better put, falling-in-and-out-of-and-back-into-love songs, forming a complex of conflicted emotions over love's charms and harms.

The album's opener, "20 Ft. Tall," is all grown-folk, with its quiet proclamation of Badu's fortitude in the wake of a failing relationship, but that shifts to the now-infamous "Window Seat," in which she becomes more pliant and pleading. None of it sounds healthy, but Badu makes it irresistible anyway. Nowhere is that more true than on the brilliantly titled "Fall in Love (Your Funeral)," in which she plays the femme fatale, warning, "Run away / if you stay / prepare to have your s-- re-arranged."

It's this mix of pregnant sighs and flirty fidgets that makes New Amerykah Part 2 so alluring. Contemporary R&B love songs can be tricky to pull off; there's a real pull for singers to indulge a big diva moment — think Alicia Keys' "No One" or Beyonce's "Halo" — yet Badu has long opted for a more restrained yet still playful approach that's rarely overwrought or bubblegum in its sentiments. With this latest album, she may be revisiting the sound of her early days, but this Badu is more worldly — and wounded — and all the more alluring.