Accessibility links
No, Thank You; We Like Pain: The Almost Discovery Of Anesthesia : Krulwich Wonders... There once was a man who liked to spend his time inhaling a lot of different gases. He was looking for a cure to tuberculosis. Some of the gases burned like heck, but one made him feel sublime. But doctors said, "No, thank you; pain is a good thing."

In 1799, a very young chemist -- about 21 years old -- inhaled a lot of carbon monoxide directly into his lungs, keeled over, was seized by agonizing chest pains, staggered into his garden, got giddy, became nauseous, went to bed, recovered -- and then, a few days later, he did it again. 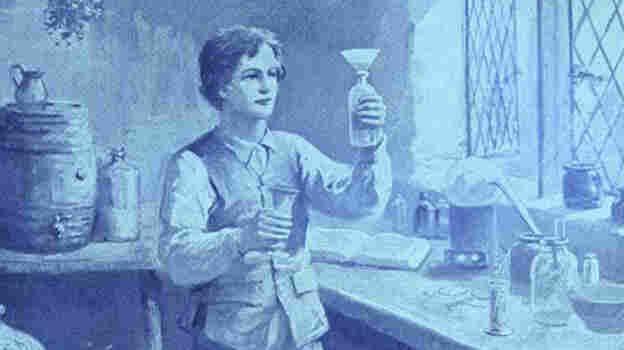 Welcome to the world of 18th century science. Richard Holmes, in his book Age of Wonder, describes how young Humphry Davy went looking for a possible cure for tuberculosis. He tried inhaling very different gases, hoping to improve respiration. In a very un-20th century way, he matter-of-factly experimented on himself, his pets, his friends and even friends of friends.

Davy's experiments with nitrous oxide, or laughing gas, are startling. His friend James Watt built a portable gas chamber, which could be saturated with gas. In Davy would go, close the door and breathe. In his official account, he says, "I lost all connection with external things; trains of vivid visible images rapidly passed through my mind." 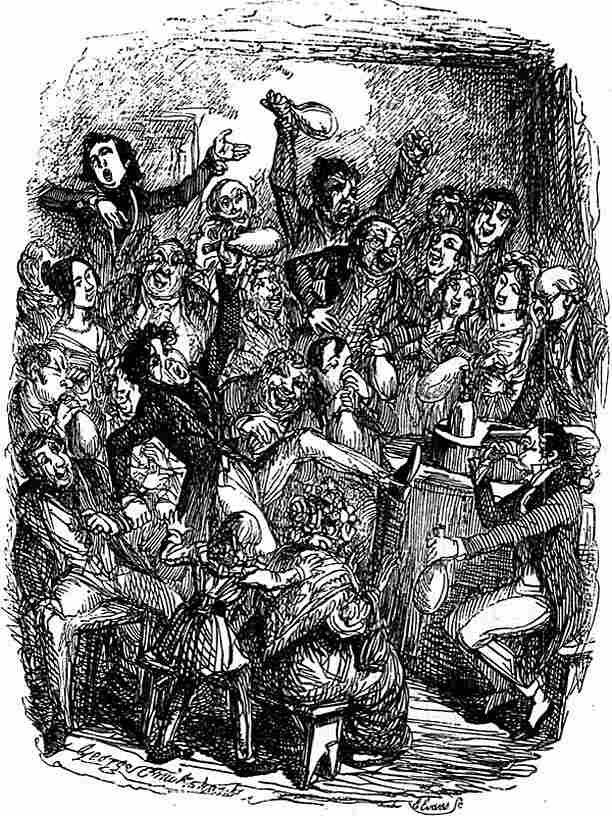 ... and just after they snorted. George Cruikshank hide caption

But his raw lab notes are more vivid:

"I was now almost completely intoxicated. The sensations were superior to any I ever experienced. Inconceivably pleasurable. I seemed to be a sublime being, newly created and superior to other mortals."

Davy gave his friends bags of gas to suck on. Soon the fast crowd in London (including poet Samuel Taylor Coleridge) were all into it.

The illustrations you see on this page are only slightly exaggerated, and in our radio broadcast you can hear another poet, Robert Southey, tell his brother: "Oh, Tom! I have had some of it. It made me laugh and tingle in every toe and fingertip. Oh, Tom! I'm going for more this evening. It makes one strong and happy. So gloriously happy."

But after all of the hoopla (and a host of more carefully administered experiments; Davy was, for his time, a very good scientist), it turned out that none of these gases helped people with lung disease. 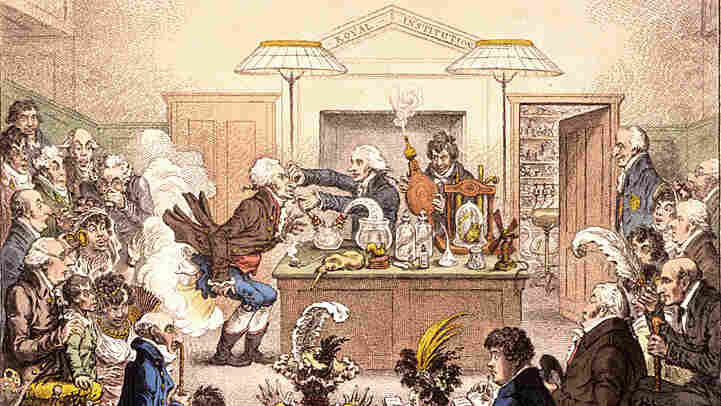 On one occasion, however, Davy had a toothache. He noticed that after inhaling laughing gas, the pain temporarily subsided. He wondered if laughing gas might be used as an anesthetic. There was no word "anesthesia" in 1799, but Davy wrote a short article suggesting that maybe laughing gas might help patients who were undergoing surgery.

"The idea that you could have pain-free surgery was completely radical, novel," says Richard Holmes. Doctors at the time had a different view: that pain was a good thing!

The doctors thought pain helped them polish their surgical skills (screaming being a prompt to cut fast and accurately), and it was believed that pain would help the patient rebound. "It was proof that the body was fighting back and healing itself," Holmes says.

That is why when Davy published his proposal, the doctors paid little attention. Close to no attention, actually. It took 40 more years for surgeons to decide that pain was not a good thing. (And when it finally happened, it happened in America. Surgeons there chose ether, not laughing gas.) 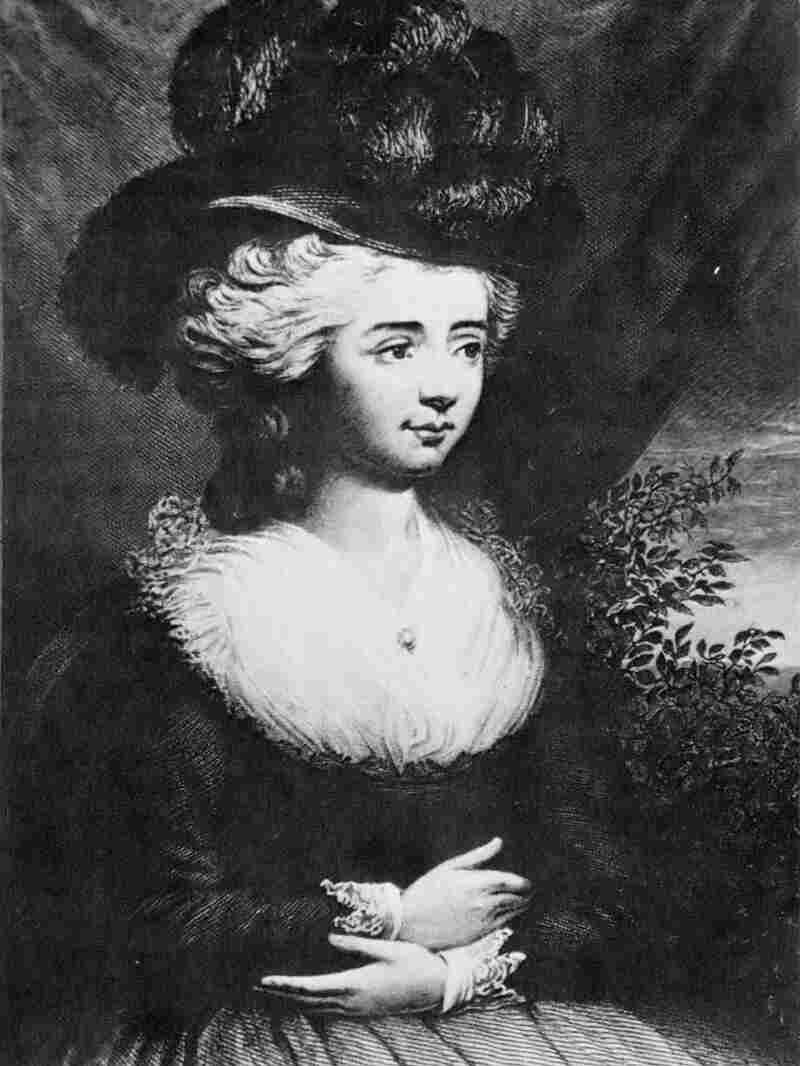 "It's a tragedy," says Holmes in our radio story (which you can hear by clicking the "listen" button above), because there followed 40 years of unnecessary pain.

Consider The Case Of Fanny Burney

For example, consider the case of the fashionable, beautiful and famous novelist Fanny Burney.

In 1810, she developed pains in her breast. Her husband put her in touch with the most respected surgeon in France, a veteran of the Napoleonic Wars. The medical team (she describes them as the "seven men in black") decided to perform a radical mastectomy. The operation was done in her home in Paris, but in the manner of a battlefield operation. It was done without anesthesia.

According to Holmes, the doctors asked Mrs. Burney, "Did you scream when you gave birth to your children?" She said yes. "Good," they answered. "Then all will be well. You will be able to scream."

Bright through the cambric, I saw the glitter of polished steel. I closed my eyes. I would not trust to convulsive fear the sight of the terrible incision. A silence the most profound ensued …

In a letter to her sister, Burney described how she was given a "wine cordial" -- nothing more.

Holmes calls Burney's account one of the most shocking and extraordinary accounts of pain ever set down (it can be found in full at My Time Machine). But, he points out, she could have had an anesthetic. "Nitrous oxide [laughing gas] kits were perfectly portable. They could have used it, but they simply didn't know the science. It hadn't got out at that point."

Burney screamed for much of the operation, lost consciousness twice, but finally recovered. The operation was a success. She lived another 20 years.

Tell Us About The Mistakes

Still, Richard Holmes believes that too often we think about the history of science as a story of progress, of things getting better and better. We don't remember the lapses, the oopses. "There's no proper history of the mistakes. The mistakes seem to me as crucial as the successes," he says.

Scientific progress, Holmes says, is not necessarily inevitable. It takes people of passion and recklessness to push for change. Sometimes, even the most passionate pioneers, like Humphry Davy, can make a discovery that would have been a huge relief to hundreds of patients, but the world is not ready to notice. And so for 40 years, people like Fanny Burney suffered when they didn't have to.

It happens all the time.