Accessibility links
Nuclear Waste May Get A Second Life If nuclear waste was handled by a technology called "reprocessing," more energy could be extracted from it, keeping more radioactive material out of nuclear waste dumps. But reprocessing is expensive and can contribute to the spread of nuclear weapons. These drawbacks have crippled interest in the technology — until now. 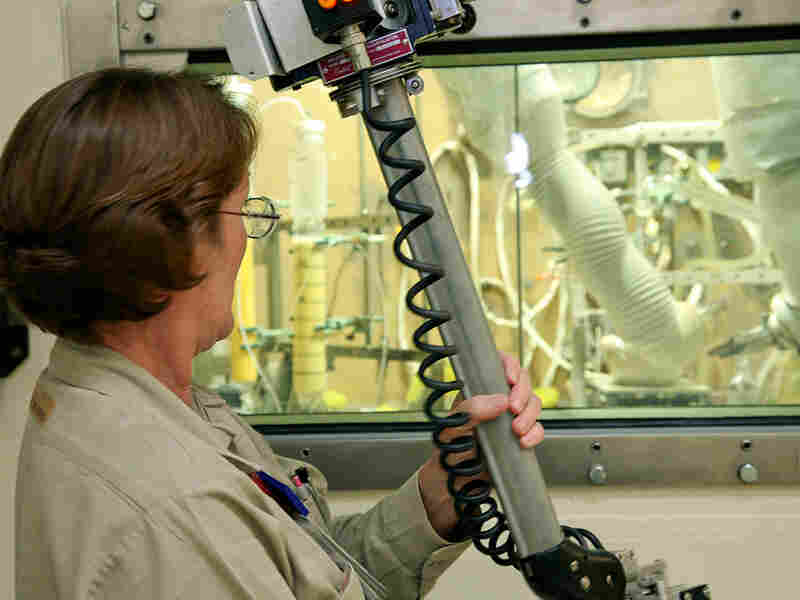 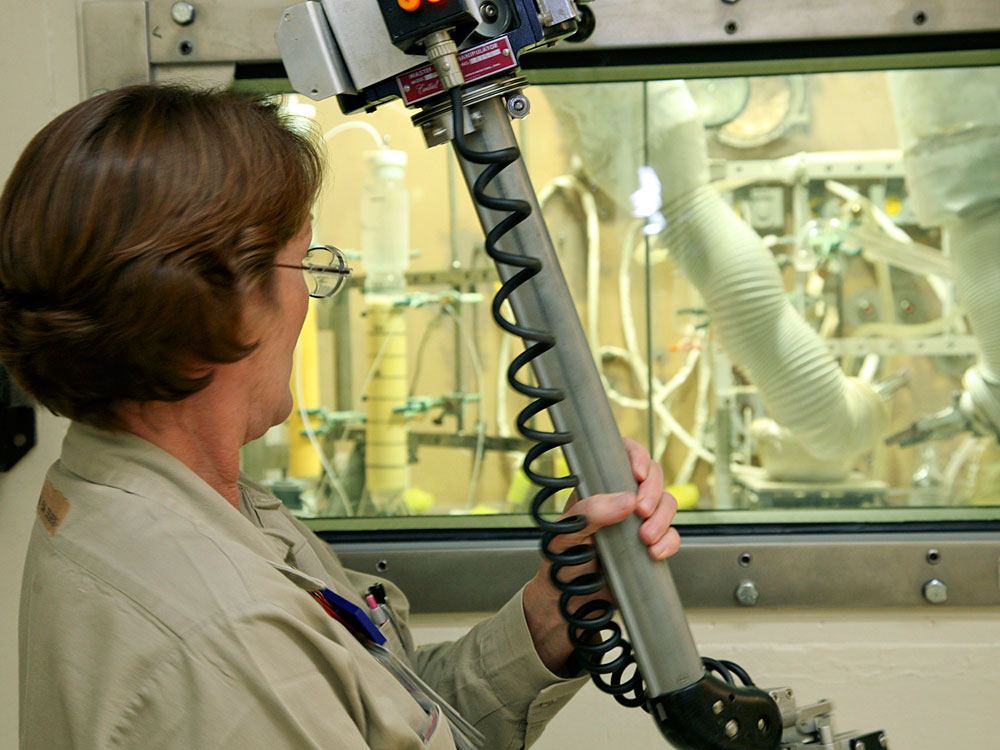 At Oak Ridge National Laboratory, an employee works with a mechanical arm to manipulate items inside the radioactive hot cell. The hot cells are used to manufacture new reactor fuel made from spent nuclear waste.

The Obama administration is promoting nuclear power, but at the same time it has put an end to plans to bury nuclear waste in Yucca Mountain, Nev.

Now, a blue-ribbon committee is pondering what to do with the waste. One option under consideration is a process that would dramatically reduce its radioactive lifetime.

Less than 1 percent of spent reactor fuel is made up of the nasty radioactive elements that last hundreds of thousands of years.

And Sherrell Greene at the Oak Ridge National Laboratory in Tennessee says the technology to remove those elements from waste is as old as nuclear reactors themselves.

New Use For Old Technology

Greene points out the world's first continuously operating reactor, and then points up at a 24-foot tall graphite block that's dotted with holes about the size of corks. It looks nothing like a power reactor because it never was.

Instead, it was called an atomic pile. And back in the 1940s, the world's first nuclear engineers used long metal rods to slide uranium slugs into the holes along the front face. Nuclear reactions inside the pile turned uranium into plutonium.

"It's hard to see it, but the slugs would fall out the back and there's a trench," Greene says. "You see the transport trench right here, and it would be moved to the reprocessing building."

Back in the 1940s, scientists here were reprocessing the waste to get at the plutonium, to use it for nuclear weapons research.

These days, technologists like Greene would like to extract that plutonium, and related elements, from spent fuel. But they want to use it as a nuclear fuel. In the process, that would also keep those long-lasting radioactive materials out of nuclear waste dumps.

This is doable. Worldwide, about a quarter of spent nuclear fuel is reprocessed. But for reasons we'll get to in a few minutes, the United States stopped pursuing this technology in the 1970s. Now, with a possible nuclear energy renaissance on the horizon, there's interest once again.

Not far from the historic first reactor, Greene and his colleagues at Oak Ridge are taking a fresh look at reprocessing.

Building 7920 has a simple white cinder-block exterior. Inside this decades-old facility are some relics of the nuclear heyday. Today they're being used to manipulate and reprocess samples of waste from nuclear reactors.

At the core of this building, technicians peer through 4 1/2-foot thick windows made of glass and mineral oil. The ultrathick glass serves as radiation shielding.

They use mechanical arms to manipulate items inside the highly radioactive hot cell.

Jason Cook adroitly sorts through the tools with the mechanical arm. It seems awkward, but he says after six years of practice it's pretty much second nature to him.

The setup practically looks like a museum piece. But researchers here have recently used these hot cells to manufacture a sample of new reactor fuel, made from spent nuclear waste. Greene explains it contains plutonium and other long-lived radioactive elements.

The idea is to send this material back into a reactor. There it will generate more energy. And in the process, the long-lived radioactive materials will break down into elements with much shorter lifetimes.

"These are the first pellets that have been produced from commercial nuclear fuel," Greene says, "in which we did not produce any pure separated plutonium in the process."

Greene says if waste weren't such a hot-button issue, nuclear power would actually look pretty attractive. One person's lifetime nuclear waste would fit in a Coke can — which is tiny, compared with the many tons of carbon dioxide the average American dumps into the atmosphere each and every year. And even on a national scale, Greene says it's not as much as you might think.

"If I put in one place all of the spent fuel generated by all of the commercial power plants in the United States throughout history," he says, "all of that spent fuel could be fit into a pool of water 25 feet deep and 300 feet on a side."

The size of a football field. Right now, that pool would need to remain reliable for a million years — which is one reason even putting it in Yucca Mountain seemed like less than a sure thing. Reprocessing the waste wouldn't reduce its volume — but it would dramatically reduce its radioactive lifetime. And that could make waste storage a much easier problem to solve.

So why hasn't the United State adopted this technology? Well, it turns out if you think of it in terms of a way to make more nuclear fuel, that's a very expensive way to go. Frank von Hippel at Princeton, a longtime skeptic of nuclear fuel reprocessing, says it's likely to remain a very expensive substitute for starting from scratch with uranium ore.

"The price would have to go up about 10 times for it to be economically justifiable to reprocess," von Hippel says.

Von Hippel's main concern, though, is that this technology can promote the spread of nuclear weapons. In fact, India used the reprocessing technology we gave it in the 1970s to make a nuclear explosive. And that changed our attitude toward reprocessing.

The U.S. "adopted the policy that we don't reprocess [and] you don't need to either," he says.

Even so, England, France, Japan and Russia have built reprocessing plants. But von Hippel says the technology is not proving to be a winner — especially for Japan.

"The ironic thing is, in effect the plant isn't working," he says. "They spent $20 billion on it and it's in fact eight years behind schedule. So they are, in fact, having to devise interim storage for their spent fuel."

So von Hippel says, from the standpoint of economics — and nuclear proliferation — it makes the most sense to leave nuclear reactor waste alone.

Greene at Oak Ridge agrees that policy issues and economics need to be considered in the debate over reprocessing.

"Our job as researchers really is to remove the scientific and technical barriers and to provide options to our national leaders and to our country," he says.

Commercial concerns play a role, as well. The French company AREVA is interested in selling a reprocessing plant in the United States. General Electric Hitachi is also developing an advanced form of the technology. And they're waiting to hear the judgment of the White House's blue ribbon committee on nuclear waste, which is due in 2012.