Accessibility links
Teachers Prepare to See Morgan Go into Space Sixty teachers are in Florida awaiting the launch of the Space Shuttle Endeavour, with one of their own, Barbara Morgan, aboard. Two decades ago, the teachers competed for a seat on a shuttle mission. In the end, NASA picked Christa McAuliffe, who died in the Challenger accident of 1986.

Sixty teachers are in Florida today, waiting for the launch of space shuttle Endeavour. Two decades ago, all of these teachers competed for a seat on a space shuttle mission. In the end, NASA picked Christa McAuliffe. She died in the Challenger accident in 1986.

Today, if all goes as planned, a second teacher from this group is finally going up into space. And the teachers have all returned to Florida to see Barbara Morgan take off. 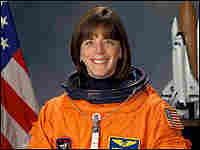 More than 20 years ago, NASA tried to inspire the nation by sending a schoolteacher into space. It ended in tragedy, with the death of New Hampshire teacher Christa McAuliffe in the 1986 Challenger explosion.

After the accident, it seemed possible that NASA would never send another teacher into space. But if all goes as planned on Wednesday night, McAuliffe's backup – an Idaho teacher named Barbara Morgan – will get her chance to orbit the earth.

Earlier this year, at an IMAX theater in Houston during a "Meet an Astronaut Day," Morgan was surrounded by kids. It's something that doesn't happen that often anymore.

"Are you still a teacher?" one child asked her.

"I still am a teacher," Morgan replied. "And when I'm all done doing the astronaut stuff, I'm going to go back to the classrooms because I really, really miss it."

None of the kids remembered the Challenger accident. They weren't even born when it happened. Neither were Barbara Morgan's two sons. One of them is in college. Morgan is 55 years old now, and she has spent nearly half her life waiting for her launch.

"I'm excited but I still can't quite picture that we're there, and I'm not sure that I will until we are strapped in, ready to go," she says. "And that's when I think I'll be saying, 'Oh, yeah, we're here. Where did all that time go?'"

The Beginning of the Journey

Back in 1985, Barbara Morgan was a grade school teacher in the small town of McCall, Idaho. Her husband, Clay, was a novelist and a firefighter. They lived in a cabin by a lake. One day, she was watching the 5 o'clock news when President Reagan came on and said that NASA was going to send a teacher into space. More than 10,000 teachers applied.

NASA picked 10 finalists, including Morgan. The finalists spent two weeks together at Johnson Space Center. In the end, NASA chose Christa McAuliffe. In a cheerful speech, McAuliffe said she wouldn't really be the only teacher on her flight. "I've made nine wonderful friends over the last two weeks, and when that shuttle goes, I might be one body, but there's going to be 10 souls that I'm taking with me."

McAuliffe formed a close bond with Barbara Morgan, who was selected to be her backup. The two young women trained together for months. In one video from those days, you can see them goofing off and giggling inside a NASA airplane.

On January 28, 1986, Barbara Morgan watched as the Challenger lifted off and then exploded. Her guest at the launch site that day was an old friend, Kathy Phelan.

"There was, for a very long period of time, the cameras just looking at pieces of the Challenger falling into the ocean," Phelan recalls. "And she was standing in front of a monitor just shaking her head saying, 'Those poor families, those poor families.'"

Phelan says her friend went to the crew quarters to try to comfort the family members. Later, Morgan went back to Idaho and resumed teaching kids, but she never gave up on the idea of going into space.

Morgan considered quitting NASA, but "We have kids all over the country looking at what do adults do in a bad situation," she told the kids in Houston. "And I know you guys know we adults talk, talk, talk and you don't listen to us but you do watch, and I know you learn a lot from watching. So do we quit, do we give up and quit on your guys' future? I can't think of anything more important to all of us than our kids - you guys - and our future, so that decision to do that was really easy. And once you make that decision, you just keep pressing forward with a happy heart."

"She did whatever NASA asked her to do," says NASA's Alan Ladwig, who managed the Teacher in Space Program. "She traveled on behalf of the agency and kept hanging in there with no guarantee that she'd ever get to fly."

Ladwig says the agency's top officials were reluctant to send another teacher up.

"Each administrator would kind of kick it down the road to the next administrator," he recalls. "I remember Admiral Richard Truly on his last day in office said, 'Well, I think it's time to fly the teacher,' and then he was gone the next day. And of course, everybody was scared as could be, that, well, what if there's another accident with another teacher?"

But NASA couldn't quite ax the program either. Then somebody had an idea: It's OK for astronauts to take risks. What if Barbara Morgan wasn't just a schoolteacher who was going along for the ride? What if she were a real astronaut?

So in 1998, Barbara Morgan left Idaho and her teaching job. Her family moved to hot suburban Houston for astronaut training, and the teacher became a full-time student. A lot of things were totally new, even the language. In a preflight interview released by the space agency, she recalled a lesson with a pilot in a small plane.

"He told me how to change the channel on the radio," she says, but all she heard was nonsense. "There were some words there but they all sounded like gobbledygook to me."

So Morgan went to RadioShack to get a special radio so she could listen in on air-traffic control and learn the lingo. She also had to learn all about orbital mechanics and hydraulic hoses. During the space shuttle mission, she'll be operating a robotic arm.

Barbara Morgan was actually scheduled to fly in space three years ago in Space Shuttle Columbia. But nine months before her scheduled mission, Columbia burned up as it returned to earth. All seven astronauts died.

Now, Morgan is scheduled to blast off in Space Shuttle Endeavour on voyage to the International Space Station.