Accessibility links
Shock, Suspicion Spread After Polish Leader's Death Poland has declared a week of national mourning after a plane crash Saturday killed 96 people, including Polish President Lech Kaczynski and the first lady, as well as dozens of Poland's military, political and religious leaders. While many Poles are still in shock, they're also asking questions about the government’s fleet of aging aircraft.

Mourners take photographs of the hearse bearing the coffin of late Polish President Lech Kaczynski as it arrives at the Presidential Palace in Warsaw on Sunday. Katarzyna Mala/AP hide caption

Poland has declared a week of national mourning after a plane crash Saturday killed 96 people, including Polish President Lech Kaczynski and the first lady, as well as dozens of Poland's senior military, political and religious leaders. While many Poles are still in a state of shock, they're also asking questions about the government's fleet of aging aircraft.

Late into the evening Saturday night and Sunday, thousands of Poles continued to walk through the square in front of the president's residence. They lay bouquets of flowers, lit candles or just stood quietly, staring at the Polish flag fluttering at half-staff above the presidential palace.

The loss is devastating to Poland; in addition to the president and first lady, the rest of the dead include the head of the Polish central bank, the deputy foreign minister, the national security adviser; the deputy parliament speaker and several members of parliament, including two presidential candidates.

The military faced equally horrific loses: the heads of the Polish navy, air force, special forces, ground forces and the army chief of staff were all killed.

Slawka Spurek says she was stunned when she heard. Spurek is visiting Warsaw from a nearby town for the weekend, and was enjoying a museum with her family when a guard told her the news.

"The lady said, 'Have you heard our president is dead?' — and it was a shock. We still can't believe it. There are so many people under the presidential palace here in Warsaw, and so many candles," Spurek says. "There's an endless river of people, and I can't believe this."

President Kaczynski and the other VIPs were traveling to western Russia when their plane crashed in heavy fog while trying to land at an airport in Smolensk. TV footage showed the smoldering, twisted wreckage of the Polish presidential jet, a Russian-made Tupolev-154, spread across a wooded area more than a mile from the airport.

Warsaw resident Alex Martin calls it Poland's biggest tragedy in its post-World War II history. "[We're] left without any commanders of the army and the president of the national bank, so it was really disaster for the country and the people."

The parliament speaker is now acting president, and the country will hold presidential elections sometime in June. 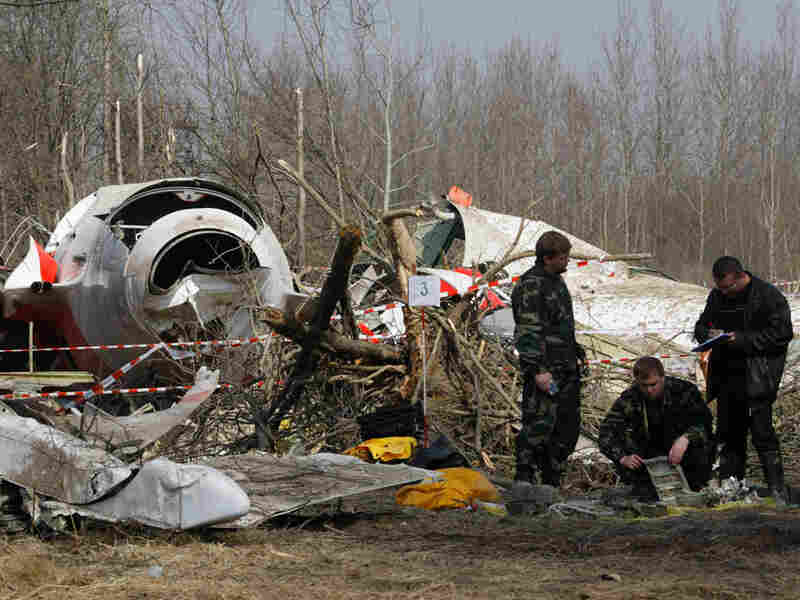 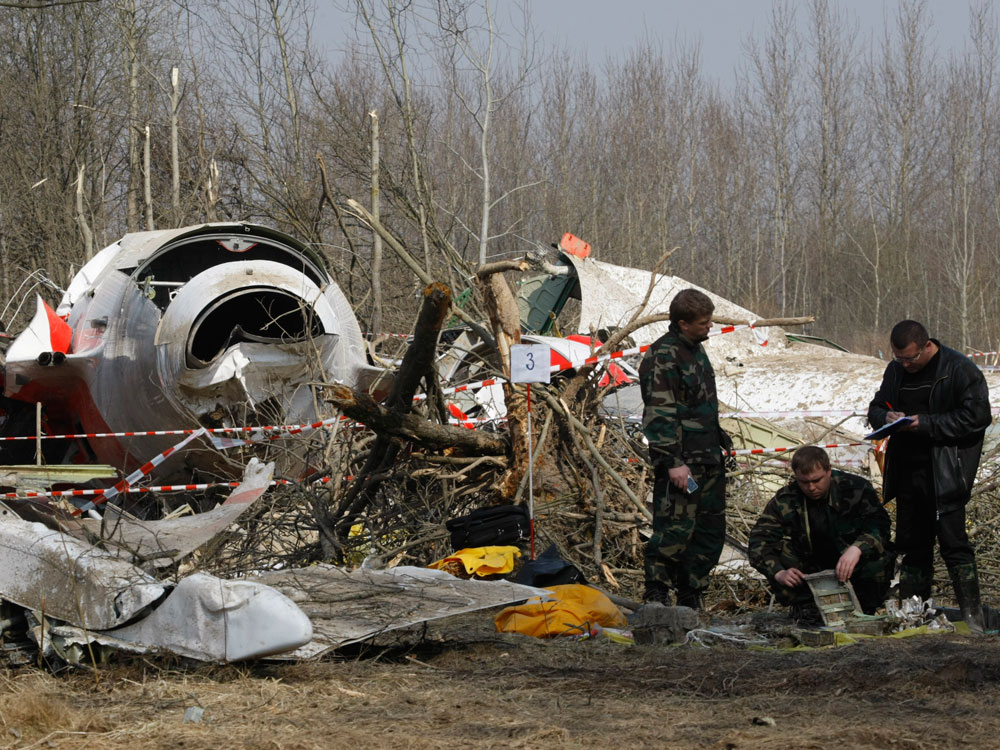 Russian investigators work near the wreckage of the Polish presidential plane Sunday just outside the Smolensk airport in western Russia.

The pain of the loss is compounded by the fact that the president and his entourage were on their way to remember the 70th anniversary of a massacre in the forests of Katyn of thousands of Polish military officers and Polish intelligentsia by the Soviet secret police during World War II. Poles are now calling the plane crash the "second Katyn," and refer to the forests around the Russian town as "cursed," "haunted" and "damned."

There are already conspiracy theories circulating. One man standing in front of the presidential palace held a sign that said "the inhuman murderers have done it again," referring to Russia.

But investigators so far believe the accident was most likely the result of pilot error. Russian media report that the Polish pilot was warned several times by air traffic controllers to divert to another airport because of the dangerous fog conditions. Professor Wawrzyniec Konarski with the Warsaw School of Social Sciences says that despite the grief and sadness, Poles are asking tough questions.

"It has to be clarified why the plane, the staff, decided to land despite the fact that the fog was so strong," says Konarski. "If it was really true that the airport warned them or not, to what extent were they aware that it was so dangerous to land the plane? All of those things have to be clarified to avoid any further conspiracy theories."

Poles are also asking why so many VIPs were on one aircraft, and why the Polish government had not upgraded its fleet of aging aircraft.

President Kaczynski had been one of the leaders of the pro-democracy Solidarity movement that helped Poland overthrow the communist regime. His friend Lech Walesa, the dissident who went on to become president, said simply of the crash, "the elite of our country has perished."