Accessibility links
Tee'd Off: Men Only At The Home Of The Masters? In her weekly commentary, host Michel Martin shares her thoughts on the 2010 Masters Tournament. Martin says that refusing to admit women as members to a golf club that hosts one of the sporting world's premier events sends a signal that this form of discrimination is still acceptable. 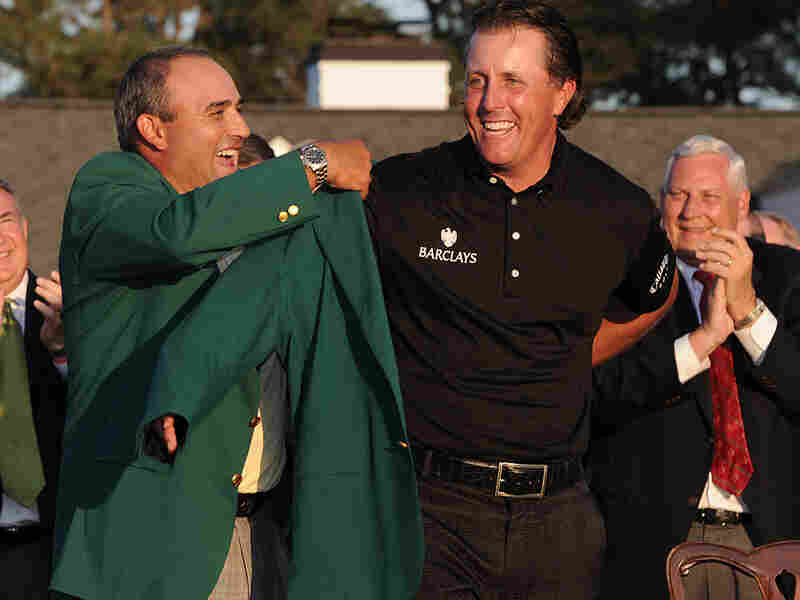 Angel Cabrera of Argentina presents Phil Mickelson with the green winner's jacket after the final round of the 2010 Masters Tournament at Augusta National Golf Club. Harry How/Getty Images hide caption 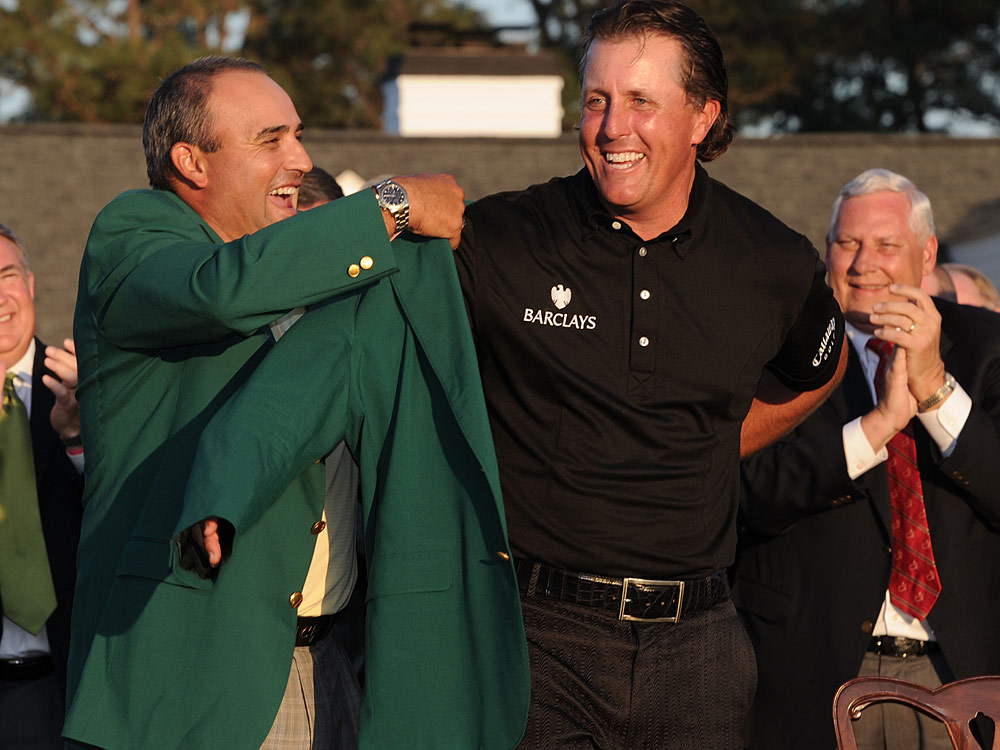 Angel Cabrera of Argentina presents Phil Mickelson with the green winner's jacket after the final round of the 2010 Masters Tournament at Augusta National Golf Club.

If you are a golf fan, as millions of people are, then last weekend's tournament was one to watch.

It had everything — the lead changed hands several times, underdogs were in the hunt, including 60-year-old Tom Watson. And, there was a Nice Guys Finish First result, with veteran golfer Phil Mickelson winning his third green jacket.

And, of course, there was the whole Tiger drama. The golf commentators were predictably discreet about it, but there's no point in pretending that a big part of the interest in the event was anything other than finding out whether Tiger Woods — just back from his self-imposed five-month exile of shame — would be able to come back, compete effectively and even, possibly, win.

For those of you who have been living in exile on a small TV-free island, Tiger has been virtually invisible since he crashed his car last November, evidently to escape the wrath of his wife Elin in response to what quickly became known as Tiger's flagrant and ongoing involvement with other women — a story that has provided no small amount of fodder for commentators of every sort.

Well, Tiger did not disappoint athletically and as a ratings draw. He came in fourth, and although his play did disappoint him, his obvious unease and relief at the fans' eager reception made him seem vulnerable and, dare I say it, human in a way that his bionic golf-man persona often does not. He did show a bit of that famous Tiger pique but commented that concern about how his personal life is affecting his play was "overblown." 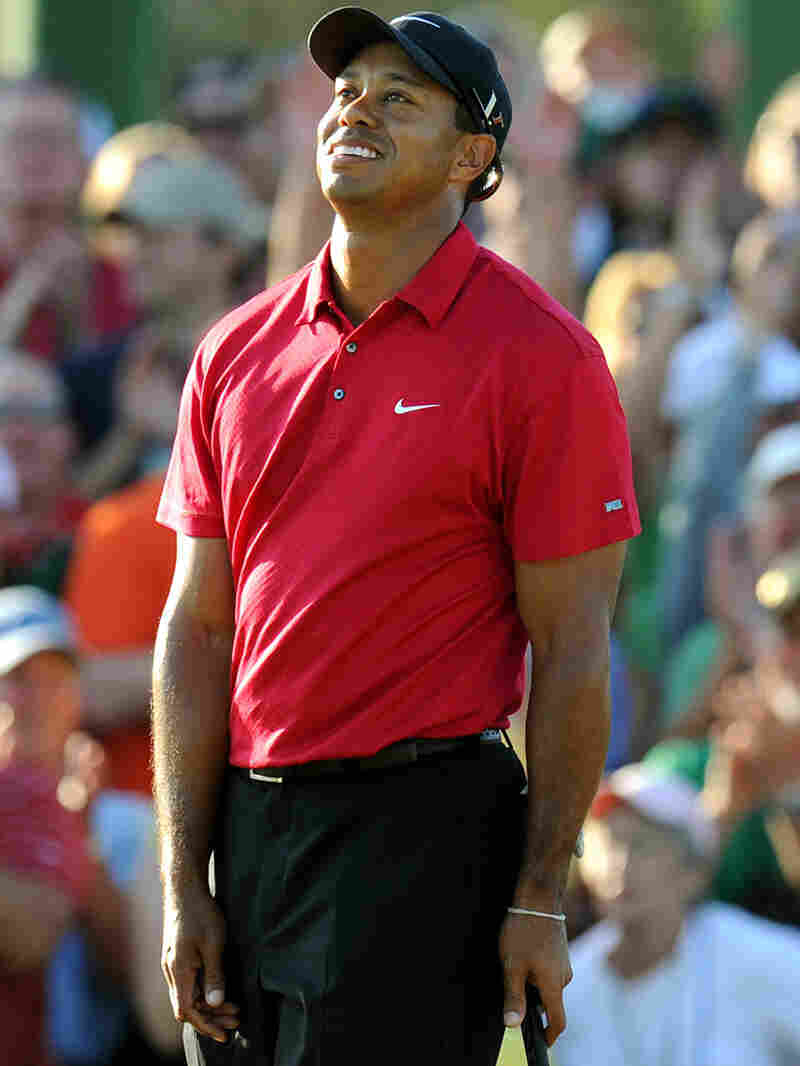 Tiger Woods reacts after sinking his putt on the 18th hole during the second round of the Masters in Augusta, Ga. Don Emmert/AFP/Getty Images hide caption

And who can really say one way or the other?

So now that we've fixated enough on how Tiger's behavior affected one woman — his wife — or even the however-many women Tiger fooled around with, let's talk about how his sport, and particularly the club that hosted this premier golfing event treats all women.

For all the tiptoeing around about Tiger's marital problems, there was no discussion about the fact that Augusta National Golf Club, the host of the Masters, still refuses to admit women as full members.

This was a big story back in 2002, when an activist named Martha Burk, who then headed a consortium of women's advocacy groups, raised this as an issue.

Burk pointed out that some 15 percent of the club's members are CEOs, many of Fortune 500 companies, and that refusing to admit women as members to a club that hosts one of the sporting world's premier events sends a signal that this form of discrimination is still acceptable.

Can I just tell you? Burk had a point then, and the point still stands.

As of the latest list published by Fortune Magazine, some 15 women are CEOs of Fortune 500 companies. (Finally, one of them is an African-American woman — Ursula Burns of Xerox.)

And while I generally believe that comparing our scars is a pointless and meaningless exercise, it is truly hard to imagine that a major American sporting event would be held at a venue that explicitly excluded blacks, Jews or members of any ethnic or racial group. And Augusta's refusal to allow the top tier of American businesswomen access to their hallowed membership rolls tells all girls in this country that yet another door remains closed to them solely because of their gender.

Augusta's policy has been defended by all manner of people, starting with Augusta's then-Chairman Hootie Johnson, who defended his club's exclusionary policy by saying his group has the legal and moral right to organize any way it wishes, and that he found Burk's public criticism "offensive and coercive."

And many criticized Burk by arguing that most people have more important things on their minds than whether wealthy women get to join an exclusive country club.

To this I say that people who have six hours on a sunny weekend to chase a little white ball around also have plenty of time to ponder the finer points of social equity.

And since when have the privileged and entitled responded to anything other than coercion of one sort or another?

As for offensive, which is more offensive? Tiger's running around on his wife, activists raising questions? Or, a major American enterprise acting as if half the population does not exist?