Accessibility links
Democratic Presidential Hopefuls Court Union Vote The Democratic presidential candidates battle in front of 17,000 union activists in Soldier Field in Chicago. The meeting of candidates - dubbed a forum, not a debate -was sponsored by the AFL-CIO, and it concentrated on labor issues. 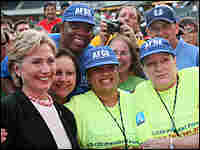 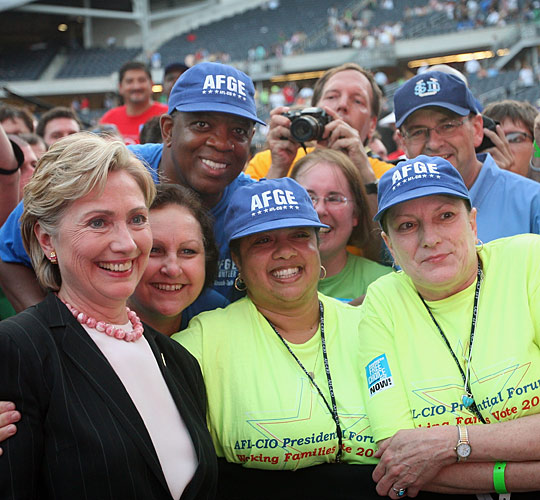 The Democratic presidential candidates did battle Tuesday night in front of 15,000 union activists sweltering outdoors in Soldier Field in Chicago. It was a meeting of the AFL-CIO, and the issues were chosen for their importance to labor. It was dubbed a forum, not a debate. But apparently nobody told the candidates.

All night long most of the candidates went back and forth between making small snipes at each other and fashioning applause lines from their most pro-labor views. Here is Barack Obama with a twofer. He slams untempered globalization — a big theme for all the candidates here — and simultaneously jabs at Hillary Clinton, who this past weekend said she will take money from corporate lobbyists.

"Globalization, right now, is creating winners and losers," Obama said. "But the problem is it's the same winners and the same losers each and every time. And we've got to mix it up and that does mean by the way that you've got to have a president in the White House who is not subject to whims of corporate lobbyists."

Get it: Hillary Clinton, he is saying, would be subject to the whims of corporate lobbyists. Clinton struck back later in a discussion of U.S. involvement in Pakistan. She referred to some recent comments by Obama, saying he might unilaterally attack al-Qaida in Pakistan without that government's permission.

"You can think big," Clinton said, "but remember you shouldn't always say everything you think if you're running for president because it can have consequences around the world."

Obama, Clinton is saying, does not understand that his words have consequences around the world. This echoes much criticism of Obama, that he is a bit young and inexperienced, especially on international issues.

In fact, much of what Clinton and Obama said had little relation to the core concerns of the AFL-CIO. They talked about Iraq and al-Qaida. They did speak to labor's issues — health care, trade, workplace standards — but they largely spoke in generalities.

It was two other candidates — John Edwards and Dennis Kucinich — who spoke most directly to this audience. Edwards — the wealthiest of the candidates — made clear that he is, at heart, a working man and that Clinton is more of a corporate type. In fact, he referred to a recent Fortune magazine cover story about Clinton.

"The one thing you can count on is you will never see a picture of me on the front of Fortune magazine saying I am the candidate that big corporate America is betting on," Edwards said.

Edwards probably had the most to gain and the most to lose at the debate. His campaign has focused especially hard on getting union support. Analysts say unions are essential for his hopes of a high showing in early primaries.

While some unions do seem likely to endorse Edwards, other union leaders have suggested they will support Clinton, because they have known her longer and think she is more electable.

If electability were not an issue, it is easy to imagine Dennis Kucinich getting the lion's share of union votes. In almost any other setting, his views might be too radical, but here, he got the loudest and longest applause of the night.

"It's time to get out of NAFTA and the WTO and have trade that's based on workers rights — the right to organize, the right to collective bargaining, the right to strike, the right to decent benefits and on and on. I'm here as the workers candidate," Kucinich said.

The AFL-CIO leadership meets Wednesday to discuss a possible endorsement.