British airline Virgin America makes its first flight - between Los Angeles and New York City. The cost of tickets is as low as $250. Passengers get satellite TV, a self-service mini bar, and music in the bathroom. But analysts worry about more congestion amid one of the worst summers for air travel. 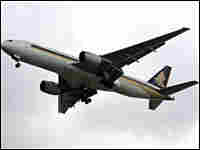 If you think airline delays are getting worse, you're right. June was one of the worst months on record, with one in three flights delayed. Roslan Rahman/AFP/Getty Images hide caption

During this busy summer travel season, flights are increasingly delayed due to a variety of reasons. In a series of stories from Philadelphia International Airport, Morning Edition looks at air travel today and how it has changed over the years.

Eileen Gwinn, a nurse practitioner from Seattle, certainly falls into that category. In late June, she and her family were traveling from Seattle to Washington, D.C., for a college reunion. It's a journey that should take eight hours. Instead, it took 36.

"That's when I started yelling, and I don't normally yell at airports," she says. The Gwinns eventually booked a flight through Bloomington, Ill., arriving at Washington's Dulles Airport at 9 p.m. — too late for the reunion dinner. Their luggage ended up in Baltimore.

Gwinn places the blame for her travel nightmare squarely on the shoulders of American Airlines, which she says misleadingly blamed the canceled flight on bad weather. She has requested compensation for her hotel expenses but, so far, hasn't heard back from the carrier. Meanwhile, she has resolved to avoid Chicago's O'Hare airport in the future and "only fly nonstop, even if we have to pay more."

A Spike in Chronic Lateness

Gwinn's experience is far from an isolated one. June was one of the worst months for flight delays since the Department of Transportation began compiling such data in 1987. One-third of all flights that month were delayed, according to FlightStats, a private firm that also tracks airline on-time performance. The average delay was 62 minutes. The number of canceled flights doubled this June, and data from the first two weeks of July suggests that the delays and cancellations persist.

Particularly worrisome is the spike in the number of chronically late flights — those that are late 70 percent or 80 percent (or even 100) percent of the time. Every airline has at least a few of these flights on their schedules. Passenger-rights groups are pushing for regulations that would require the airlines to "label" these flights as chronically late so consumers can avoid them — or at least know what they are getting into when they book a ticket.

"When you contract to do X but consistently do Y, this is usually considered consumer fraud," says Paul Hudson, executive director of the Aviation Consumer Action Project.

As troubling as the latest figures on flight delays may be, they don't tell the whole story. The delay statistics don't include diverted flights, or flights that are held on the tarmac for hours, then return to the gate. Last year, more than 16,000 flights were diverted to other airports, and one in 20 flights was canceled.

"Department of Transportation delay statistics are inaccurate to the point of being deceptive," Hudson says. "It's like a doctor telling a patient all about his hangnails, but omitting to mention he also has cancer."

One airline in particular, Northwest, has canceled a large number of flights this summer --300 so far this week alone. Northwest blames "pilot absenteeism" for the cancellations. The pilots blame the airline for flying more tightly packed schedules than before. Either way, the passenger suffers.

System at Close to Capacity

Why the record number of delays this summer? There is plenty of blame to go around.

First of all, after a dip following the Sept. 11, 2001, attacks, the number of air travelers is growing again. Aviation experts say this summer may be the busiest travel season ever. So far, passenger miles are up 3 percent compared with last year. That may not sound like much of an increase, but the air-traffic control system is already operating at close to capacity. It doesn't take much to overload the system. A few thunderstorms or a spike in air traffic will do it.

Airlines are flying with their planes about 90 percent full, so if one flight is canceled, they can't easily accommodate stranded passengers on other flights. An unusually large number of thunderstorms this summer has compounded the problem. Planes are forced to divert around the storms, and that often leads to a domino of delays.

"You have an air-traffic control system that is essentially based on World War II-era technology. So when you have thunderstorms, it's like putting glue in the system," says Victoria Day, a spokeswoman for the Air Transport Association, the airline industry's trade group.

The airlines have been pushing the federal government to modernize the air-traffic control system. In fact, the Federal Aviation Administration has begun to do just that. The agency is developing a new system that relies on a series of satellites instead of ground-based radar. It will enable planes to safely fly closer together, and therefore reduce delays. But the $40 billion project is costly and years, if not decades, away from completion. Congress has yet to commit to full funding.

A Very Bumpy Ride Ahead

Meanwhile, the congestion and delays are forecast to get much worse in coming years. The FAA predicts that delays will increase 62 percent by the year 2014, given projected passenger growth and the antiquated air-traffic control system.

Aviation experts say the airlines shoulder some of the blame for the delays. They schedule many flights at peak hours — at 8 a.m., for instance — leading to gridlock in the morning and evening hours. The airlines say they are merely responding to consumer demand.

Meara McLaughlin, vice president with FlightStats, agrees that consumers are also to blame for the delays.

"Air travelers have come to believe that they have a God-given right to book a flight to Boca for $1.50." With so many people crowding the skies, delays are inevitable, she says. "The idea that the aviation system is endlessly expandable has proved to be a falsehood, and it's an inconvenient falsehood."

One of passenger Eileen Gwinn's biggest complaints about her 36-hour ordeal is that the airline crew and gate agents provided incomplete information, if they provided any at all. It's a common complaint, one that, consumer groups say, boils down to money. If an airline can claim that a delay was caused by bad weather or air-traffic congestion, then it is not required to provide free lodging or other compensation to passengers.

"If they were honest with passengers, it would cost them money," Hudson says.

"The airlines are not honoring their contract with passengers," agrees Kate Hanni, founder of the Coalition for an Airline Passengers' Bill of Rights. "They know why the plane is delayed, but they won't tell you anything because they want to keep you from migrating to another airline," she says.

Another reason for the delays: Airlines keep too few planes and crew in reserve. If there is a mechanical problem with a plane, or a pilot is sick, then chances are the flight will be canceled.

Congress is mulling over several bills that would mandate certain rights for airline passengers, possibly including:

The airlines oppose a mandated passengers' bill of rights, arguing that such measures could be counterproductive and lead to more, not fewer, delays.

Consumer groups don't buy those arguments. They point to Europe, which recently enacted a passenger bill of rights. The new regulations ensure that passengers on delayed flights are compensated. For example, if a flight is delayed for more than two hours, the airline is required to provide passengers with meals and refreshments, as well as two free telephone calls, e-mails or faxes. If a flight is canceled or overbooked, the airline must pay each passenger up to 600 Euros, or about $820.