Just over a year ago, one of America's troubled cities got a new leader. Newark, New Jersey had a booming downtown but also desperately poor neighborhoods. Mayor Cory Booker symbolized his commitment to improve those neighborhoods by living in one of them.

Today, the city is still struggling with a high murder rate, and over the weekend, three college students were killed. They were shot - executed, really - in a schoolyard.

Mayor Booker joins us now on the phone from Newark. Mayor, good to talk with you again.

INSKEEP: What is the latest the police have told you about the investigation?

Mayor BOOKER: Well, we've got some very encouraging leads and we're making some progress, so I'm very hopeful that we're going to capture the people responsible.

INSKEEP: No arrests yet to your knowledge?

Mayor BOOKER: No arrests yet. I've been working on it since late last night and no arrests.

INSKEEP: Are police telling you they think they know who did it?

Mayor BOOKER: You know, we don't want to say that right now. We're just letting folks know that we're making a lot of progress on the case. And I'm encouraged; I believe we're going to find the people.

INSKEEP: And Mayor, can you describe in a broader sense what is happening in your city? I understand that although crime overall is down, the murder rate has remained high.

Mayor BOOKER: Well, that's a frustrating thing. You know, up until this incident, we were at 30 percent drop in shootings overall and a 10 percent drop in murder. So everything, every category of crime was going down in double digits. But that's all overshadowed when something like this happens and really hits to the heart of our community, and I think everybody is really shaken by it.

INSKEEP: Have there been - go ahead. Go ahead.

Mayor BOOKER: You know, we know Newark is heading in the right direction. We're really turning a corner by every measure. There's an excitement in the city. Community leaders, community neighborhoods are just showing so many signs of progress. But when you have something like this happen, it really shakes the community.

INSKEEP: Have there been other high profile killings?

Mayor BOOKER: No, there haven't. Again, we were heading towards one of our safest summers in years. A lot of the things that residents are doing, activists are doing, clergy even patrolling streets, have been showing tremendous progress. So Newark was really doing a lot to really challenge the stereotypes that people have often of our great city, and the people were standing up.

But this shows that we still have a problem. We still take it very seriously. We're working to push it down. And I'm encouraged that we're going to deal with this. We're going to come together.

The father of one of the victims said very eloquently that, you know, he really wants to see his son's death be a spark to pull people together. And that's what we're doing right now.

INSKEEP: A lot of them…

Mayor BOOKER: This is a national problem. You know, I've gotten calls from, you know, everybody from Philadelphia to - you know, Mayor Bloomberg was generous enough to reach out and…

Mayor BOOKER: You know - oh, exactly. And, you know, this is something we really have to face - gun violence in our country. And I think that while we're going to deal it locally here in Newark, we all have to be cognizant that's there's things we could be doing to change the way we go about fighting crime, but more importantly preventing crime.

INSKEEP: Just one brief question. We've just got a few seconds. A lot of the violence in past years in Newark was drug-related. Can you name one thing you've done to reduce drug-related violence that you think is working?

Mayor BOOKER: Well, we have seen a lot of things work. One, we started a centralized narcotics bureau. We've shifted a lot more police officers onto our streets. We created a Fugitive Apprehension Team that's been remarkably successful in going after people with warrants, going after people who are known criminals. And we're doing a lot of things to focus on prison reentry, which we see as one of the maddening things it's not happening in the nation enough. But when guys come home, instead of re-arresting seven out of 10 of them within three years, we're trying to help them better reintegrate into our community.

INSKEEP: Okay. Mayor Booker, thanks very much for the update. Appreciate it.

INSKEEP: Cory Booker is the mayor of Newark, New Jersey, where police are still investigating the murders of three college students over the weekend. 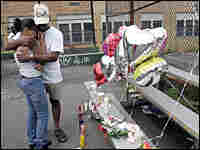 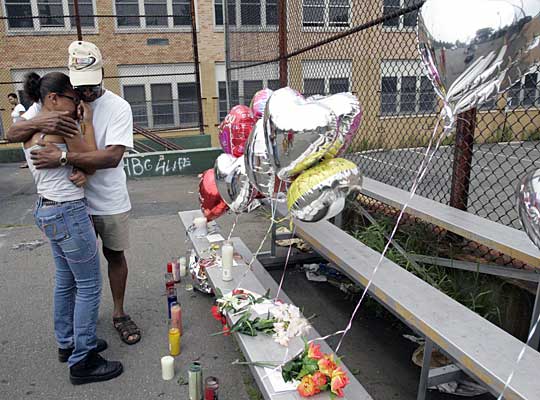 Bishop Samuel Dabon (right) of the South Orange United Methodist Church holds his daughter, Rachel Ramirez, at an impromptu memorial in Newark, N.J., on Tuesday, for three young people who were shot and killed at the scene Saturday night. 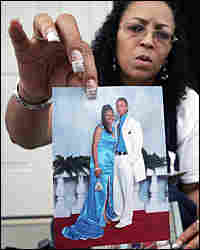 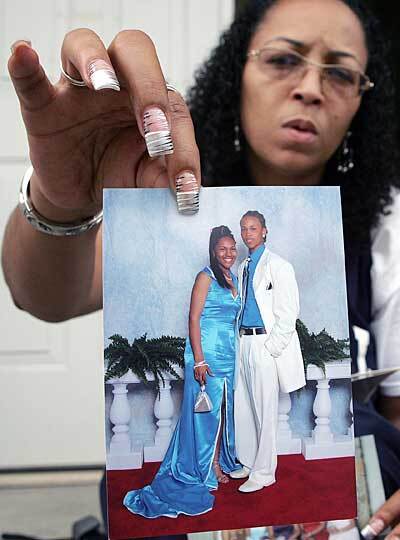 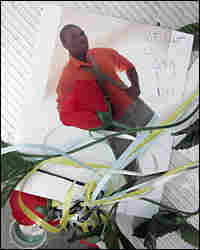 Dashon Harvey, one of three young people who were shot and killed Saturday, is seen in an undated photo that is part of an impromptu memorial at an elementary school near the scene of the shooting. Mike Derer/Ap Photos hide caption 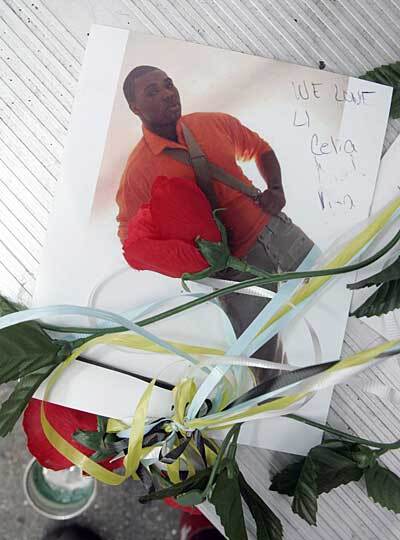 Dashon Harvey, one of three young people who were shot and killed Saturday, is seen in an undated photo that is part of an impromptu memorial at an elementary school near the scene of the shooting. 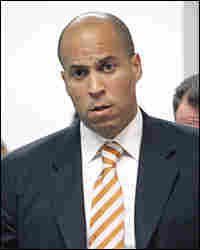 The new mayor, elected last year, ran on a campaign promise of reducing crime. Still, gun violence has become an all too common part of daily life.

Last weekend, four young adults, friends who were headed to college together in a few days, were shot at close range, killing three and critically wounding the fourth.

The brutal killings, along with another unrelated shooting over the weekend, brought Newark's murder total to 60 in 2007. That is three fewer than for the same period in 2006. The count is lower, but statistics show that 17 people have been killed in the city in the past eight weeks – a rate that, if it continues, would surpass 2006's total of 106 murders for the calendar year.

A month ago, Newark's mayor, Cory Booker, announced that crime in the city had fallen by 20 percent in the first six months of 2007, compared with the year before. The number of rapes, aggravated assaults and robberies has fallen. But shootings continue unabated. The murder rate is up 50 percent since 1998.

"This shows that we still have a problem," Booker said. "We're working to push it down and encouraged that we are going to deal with this. We're going to come together."

Booker said the father of one of the victims said he wanted his son's death to be a spark that will pull people together to fix the city's problems.

"We all have to be cognizant that there are things we could be doing to change the way we go about fighting crime, but more importantly preventing crime," Booker told NPR. "This is something we really have to face, gun violence in our country."

Some residents say Booker needs to do more.

"He doesn't deserve another day, another second, while our children are at stake," said Donna Jackson, president of the Take Back Our Streets organization. "Anyone who has children in the city is in panic mode. It takes something like this for people to open up their eyes and understand that not every person killed in Newark is a drug dealer."

Booker, in return, called for unity, saying this is "not a time to play politics and divide our city."

He said the community shows many signs of progress, and that residents, activists and clergy members are helping to turn the city around. Under Booker's watch, a specialized narcotics bureau was established. He has put more police officers on the streets, and the fugitive apprehension team has been successful at bringing in known criminals with outstanding warrants. The city is working on its prisoner re-entry program, helping former inmates reintegrate into society.

"We know Newark is heading in the right direction. We're really turning a corner by every measure," Booker said. "Newark was really doing a lot to challenge the stereotypes that people have often of our great city."

Killed in the apparent robbery attempt were Terrance Aeriel, 18, Iofemi Hightower, 20, and Dashon Harvey, 20. Aeriel's sister, Natasha, 19, is listed in fair condition at Newark's University Hospital after being shot in the head.

The friends were hanging out together outside an elementary school in a middle-class neighborhood, less than one mile from the campus of Seton Hall University. They liked to go there and listen to music.

Gov. Jon S. Corzine said the crime was "beyond comprehension," and "cold-hearted and cowardly."

Terrance Aeriel, Hightower and Harvey were forced to kneel against a wall behind the school and were shot at close range. Natasha Aeriel was found about 30 feet away, slumped near some bleachers.

Police are piecing together details of the crime from witnesses, including Natasha Aeriel, and are analyzing graffiti at the school. Security cameras were mounted at the school, but most were not working at the time. City officials said Wednesday the cameras may have been tampered with in the 24 hours prior to the shootings. Investigators are urging anyone with information to come forward and are offering a reward of more than $50,000.

Booker's office said Wednesday that after struggling to find clues, they are now close to identifying at least one suspect. They have not made an arrest.

The four victims were all set to return to Delaware State University this fall. They played music together, and stayed away from drugs, alcohol, gangs and violence. None had criminal records.

Friends since elementary school, Hightower and the Aeriels had played together in the West Side High School marching band. Terrence Aeriel took Hightower to prom in 2006, chauffeured by his sister. The three met Harvey at Delaware State. Harvey planned to graduate from Delaware State with a degree in psychology in 2009.

Terrence Aeriel was studying business management in college. He wasn't enrolled last spring but had re-enrolled for fall semester. He played the baritone saxophone and attended Delaware State's band camp last summer. He also worked with kids at a teen center.

His sister, Natasha, is a junior, majoring in biology. She played the alto saxophone in the Delaware State marching band.

In addition to school, Hightower held two jobs. One was at an assisted-living center where her mother also works.

"I'm very angry because they were good kids with bright futures," said Hightower's mother, Shalga. "They didn't deserve it. My daughter was a very sweet, loving young lady who would help anybody in need."

Written by Kayla Webley from NPR reports and The Associated Press.