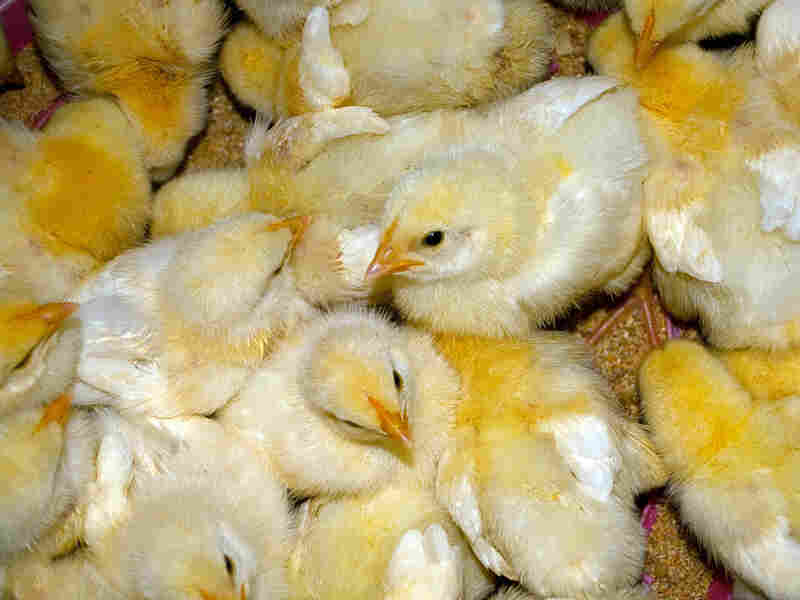 Baby chicks at R&B Acres, a farm in Oregon, Wis., that supplies free-range chickens to consumers through the help of Local Dirt, a national online marketplace for local food. Jay Field for NPR hide caption 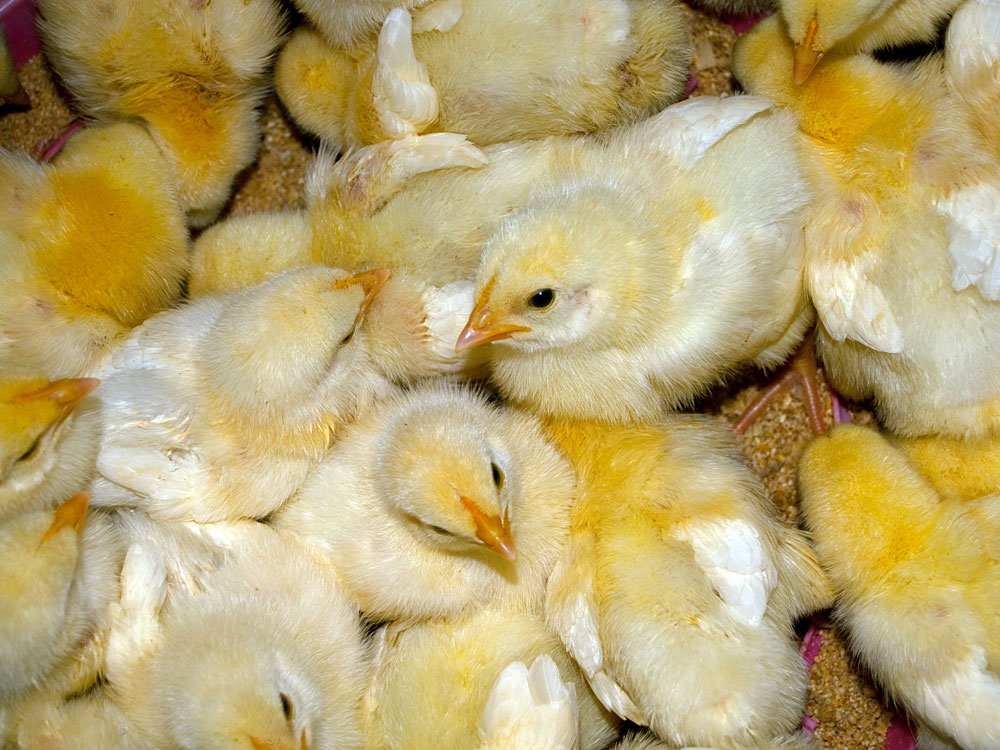 Baby chicks at R&B Acres, a farm in Oregon, Wis., that supplies free-range chickens to consumers through the help of Local Dirt, a national online marketplace for local food.

Local produce and meat are projected to be the two most popular items on restaurant menus this year, according to the National Restaurant Association.

But as more institutions like schools and hospitals look to "buy local," they're finding themselves in a bind -- large food distributors may not carry items those customers are looking for. And fragmented networks of local farms don't know how to distribute the food efficiently.

Inside the cafeteria freezer at Sauk Prairie Memorial Hospital, near Madison, Wis., Amy Miller, the hospital's food service director, points at a pile of spindly thighs and breasts inside a Ziploc bag. Miller provides up to 200 meals a day, and a few months ago, she decided she'd served enough of this mass-produced poultry.

"We wanted to have a product we were comfortable with as far as not having the antibiotics -- all the additives that go into chicken today," Miller says.

Miller likes her one-truck-one-delivery-no-hassles relationship with her current supplier, Reinhart Food Service. So she asked the company if it could bring some local organic chickens on the truck. Reinhart told her that food safety regulations made that impossible.

"While these federal guidelines are voluntary, big distributors require them to minimize the risk of delivering contaminated food," Miller says.

Reinhart would not make someone available to speak to NPR despite repeated attempts. But Bob Golden, an industry analyst in Chicago, says that while food safety is a concern, it isn't the main barrier to offering more local food.

"The major distributors are trying to gauge demand, and adjust their orders and offers accordingly," Golden says. "It's very complex and complicated, adding a whole realm of locally sourced foods."

The Realities Of Eating Local

Definitions of "local food" vary widely. Some refer to the distance food travels from source to consumer. (It can range from 25 to 400 miles.) Other definitions qualify locally grown food according to the sustainability and quality of its production, according to a survey by the Department of Agriculture's Economic Research Service.

Regardless of the exact definition, the local food movement is a complex idea with several advantages, as well as a couple of lesser-known disadvantages.

Fresher Food: Because it does not have to travel as far, local food, if harvested during its peak season, retains more of its nutritional value and taste by the time it reaches the table, according to the Leopold Center for Sustainable Agriculture.

Support For Local Farmers: Smaller farms lack the machinery and complexity of large-scale food production and therefore must employ more workers to produce the same amount of food. These farms are also more likely to reinvest profits back into the community rather than deposit them into a corporate bank account in another state.

Limited Selection: Local food can provide increased variety, but it can be limited by seasonal availability. As food writer Michael Pollan would say, this is an "omnivore's dilemma." Americans are used to eating almost any fruit or vegetable all year round (for an inflated sticker price), but to truly eat locally, certain foodstuffs would not be available on demand.

Smaller Carbon Footprint? Local foods may reduce carbon emissions since they don't have to be transported as far. But it means smaller, more frequent trips made by consumers to farmers markets and local grocers to replenish items that lack the preservatives and shelf life of conventional food stuffs.

The Little Guys: Increased consumption of local foods in America could impact the economies of smaller, less-advanced countries that rely on food exports.

"If a company were going to jump in with both feet at this point, they would probably have to put a lot of upfront investment in," says Kyle Stiegert, a food systems economist at the University of Wisconsin. "That would cut into their profit margins for quite some time."

Stiegert says that for the foreseeable future, such an investment keeps the cost of local food prohibitively high.

"To me, the key is to make local food available, but also to make it price competitive," he says. "Without the price competition, it's going to be harder to get people engaged on this."

In Dane County, Wis., an innovative effort is under way to reconcile these two issues.

Olivia Parry runs the Institutional Food Market Coalition out of the county's Office of Planning and Development. It began as a program to create more business for the small and mid-sized family farms in and around Madison, and targets institutional markets

At first, Parry had to beg businesses to show up at her meetings. But by last year, the program moved more than a million pounds of local food into institutions in southern Wisconsin.

One resource that she uses is Local Dirt, a national online marketplace for local food.

"We have found a chicken farmer through them that has free-range chickens," Miller says.

Miller is expecting a delivery of 100 birds in early May.

"We've had samples already, and they are fabulous compared to what we used to be getting," she says.