Accessibility links
For Traveller Women In Ireland, Life Is Changing Referred to as the gypsies of Ireland, Travellers have moved in caravans and lived in roadside encampments for hundreds of years. Now, they're settling in government-created "halts." And although they have faced cultural prejudices, times are changing. Now, they are "speaking up for themselves and being heard," says Traveller Helen Connors.

Second of a yearlong series 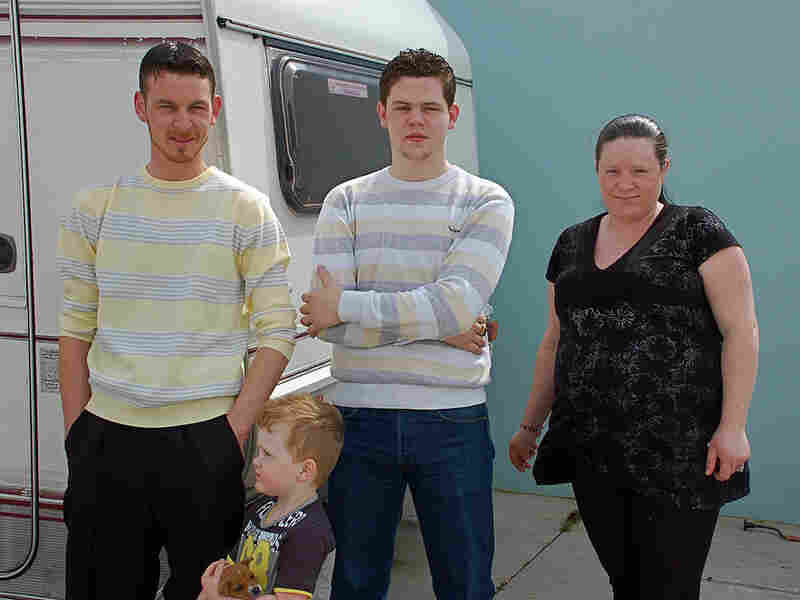 Helen Connors (right), who is part of a Traveller family, says she started school when she was 4 years old. But the community didn't take Traveller girls very seriously — and she says she was called a "knacker" and a "pikey." Nikki Silva hide caption 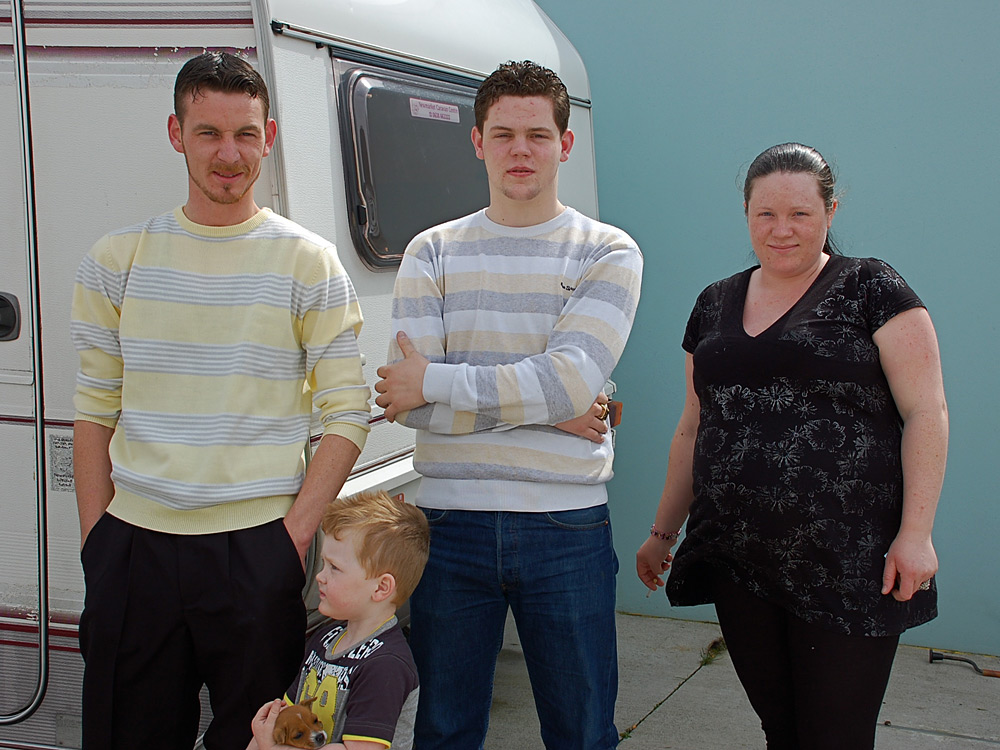 Helen Connors (right), who is part of a Traveller family, says she started school when she was 4 years old. But the community didn't take Traveller girls very seriously — and she says she was called a "knacker" and a "pikey."

Travellers, "the people of walking," are often referred to as the Gypsies of Ireland. Mistrusted for the most part, their traditions and lifestyle are not well understood within the larger culture. Historically, they were nomads who moved in caravans and lived in encampments on the side of the road. Their tradition as "tinkers" or tinsmiths, and as the breeders and traders of some of Ireland's best horses, goes back hundreds of years.

As times change in Ireland and the notions of private and public space change and contract, the culture no longer accepts the Travellers on public and private lands and has begun to create "halts" where they can settle.

Helen Connors, 21, lives in Hazel Hill, a new government experiment in Traveller housing on the lower slopes of Dublin Mountain, with her husband and two children.

"Travelling girls don't really mix much with settled girls," says Shirley Martin, a 23-year-old mother of three. "The way of living, caravans, by the side of the road. A come and go thing. My family is a Travelling family."

Life In School Hard For Travellers

There are similarities between Traveller and Romany Gypsy culture, but Travellers do not define themselves as Romany, says Mary Burke, associate professor of Irish literature at the University of Connecticut. 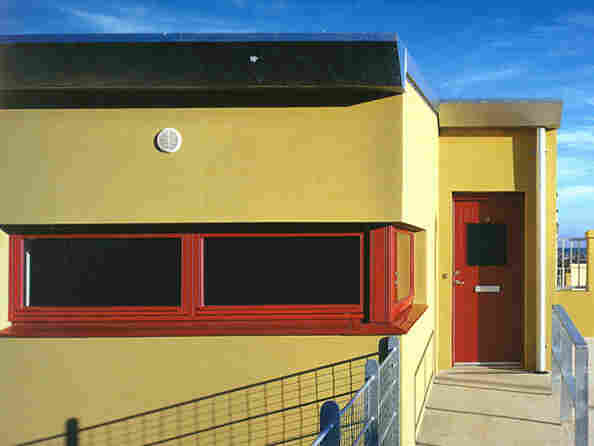 The Irish government is experimenting with housing for Travellers — the Gypsies of Ireland — on the lower slopes of Dublin Mountain. The houses are called "halts." Today, the majority of Travellers either live in houses permanently or live in houses at certain times of the year. Gerry O'Leary hide caption 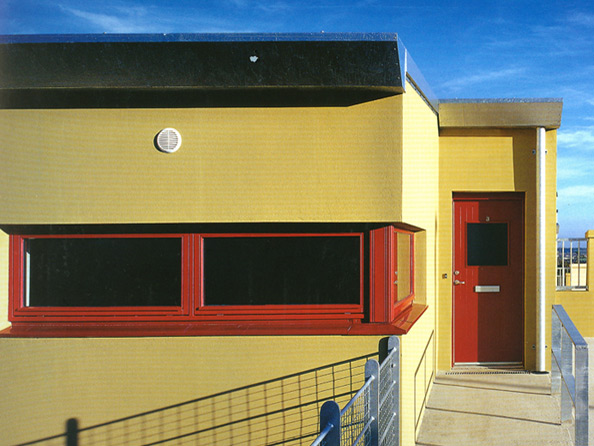 The Irish government is experimenting with housing for Travellers — the Gypsies of Ireland — on the lower slopes of Dublin Mountain. The houses are called "halts." Today, the majority of Travellers either live in houses permanently or live in houses at certain times of the year.

"But that doesn't mean that prejudice or identity disappear when they settle in houses," Burke says.

Connors started school when she was about 4 years old. She says the community didn't take educating Traveller girls very seriously.

"I didn't learn very much in school because I was bullied a lot," Connors says. "You were a 'knacker' or a 'pikey.' That's all you'd hear every day. You'd be in trouble nearly every day for fighting. If I said to the teacher, 'I can't do that; can I have some help?' she'd say, 'Here's paper; just go down to the back of the class and draw whatever you want.' I had one teacher that said to me, 'Well, a Traveller won't do nothing with their life. Why would you want to know how to read and write? You're going to go off and marry young and have loads of children.' So I was just put down to the end of the class and everyone else was up on top."

Because school in Ireland is set up for kids who live in a house year-round, Burke says, a cultural attitude developed toward Traveller kids who moved around a lot for not being capable of -- or interested in -- learning.

"And that carries over into today," Burke says.

Traveller families are especially strict with girls, according to Martin.

"Some mothers and fathers is too strict where you wouldn't be allowed to go anywhere," she says. "This is why most Travelling girls get married young, because they want to get away from that. Travelling girls, most of them today would be 16, 17, 18, which will want marriage."

This year, NPR and The Kitchen Sisters will bring you stories of girls and the women they become. You can follow them on Twitter by going to @kitchensisters. You can send suggestions to our listener comment line at (202) 408-9576.

We want to hear from you — Click Here For Instructions

The girls travel in a pack, promenading.

"When I was 13, I met my husband at a festival," she says. "And the minute I met him, I knew I was in love. I got engaged when I was 15. I had a big do for that. I had a big engagement party. Just went from there then. I got married last month. I had a lovely big huge white dress."

"Whatever you want on your wedding day you have to get," Connors says. "When I got married, I got to design my own wedding dress -- my dream dress. It had a 50-foot train. It was all diamonds and lace. Travellers, too, they have a mini-bride. That's a girl you just dress up to look just like yourself for the day. Your mini-bride has to look like you."

Theresa Hughes and daughter Jennifer have been sewing wedding dresses for Traveller girls for more than 10 years.

"The Travelling community, they come over to us to get their outfits made for going to weddings -- even the mothers and grannies want bling," Theresa says. "Thick pink satin, sequins, beads, glitter. They go all out."

Jennifer shows off a white miniskirt with beads on it.

"I just go all out; I go for extremes," she says. "I kind of used Elvis as an inspiration -- Elvis' white Lycra suit, the flared one that he wears to his last concert."

There is a lot of money involved in Traveller weddings, both in terms of substantial dowry payments and in terms of putting on a good show.

As women age in Traveller culture, they gain power. They often outlive the men. They can become matriarchs in the culture, particularly if they have a large family. And there's prestige attached to being the mother of many. 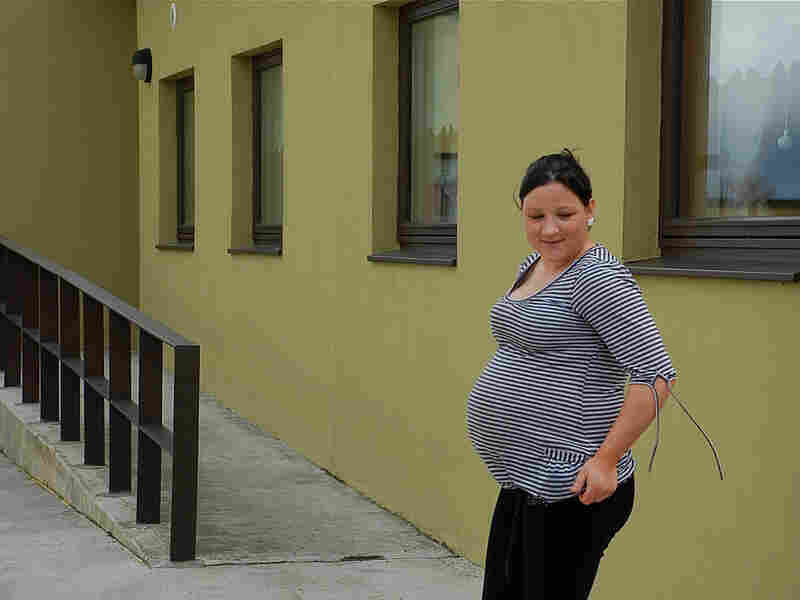 Shirley Martin, 23, a resident at Hazel Hill, says that Traveller families are especially strict with girls — and that's why they marry young. Nikki Silva hide caption 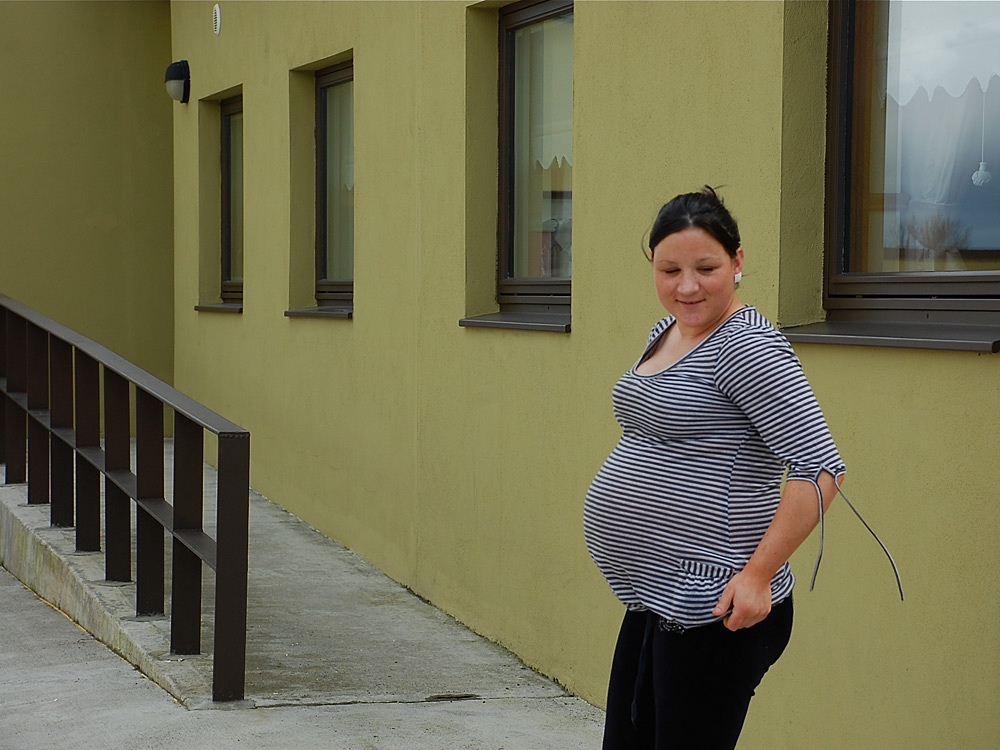 Shirley Martin, 23, a resident at Hazel Hill, says that Traveller families are especially strict with girls — and that's why they marry young.

"When I was a kid, the Travellers, they used to come around our houses making pots and pans and doing odd jobs," says Paul Connelly, the caretaker of the Hazel Hill halting site. "And in return for that, they may get milk and bread and potatoes. People will not tolerate Travellers living on the side of the roads now. It's dangerous for themselves. The country's trying to get them settled. Set up halting sites and trying to get them to live in them."

"My mother and father had 17 children -- nine boys and eight girls," she says. "Myself, I left school when I was 11, but then I started a trainer course where I learned how to read and write. Then I did a child care course, and I passed all my exams. Now I can read and write what I never learned in school. I learned it by myself. Travellers are speaking up for themselves and being heard."