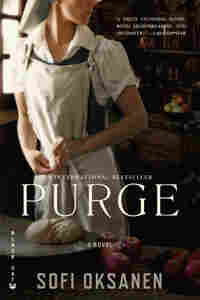 In Koba the Dread, Martin Amis' concise history on Stalin's legacy of perversity, the British novelist makes the point that the enormity committed by the Soviets during (and before and just after) World War II somehow didn't get the deep traction in the consciousness of the West that the inhuman crimes of Nazi Germany did.

Sofi Oksanen's disturbing, riveting novel Purge partly operates in opposition to that fog of forgetfulness. Her book's story -- an escaped Russian sex slave turns up out of nowhere, collapsing in front of the dilapidated house of an elderly woman in Estonia -- is a jolt.

Set in 1992, only three years removed from the joyful optimism undammed by the demolition of the Berlin Wall, Purge burns through the mists to show how decades of debasement have twisted society in the former USSR into one characterized by crime and cruelty. Oksanen couches this larger theme within a tight, unconventional crime novel, one punctuated by dreadful silences, shameful revelations and repellent intimacies. By examining the toll of history on a close, personal level, Oksanen, an acclaimed Finnish playwright and novelist, makes the cost of mere survival (never mind the price of retaining one's dignity) sickeningly palpable. 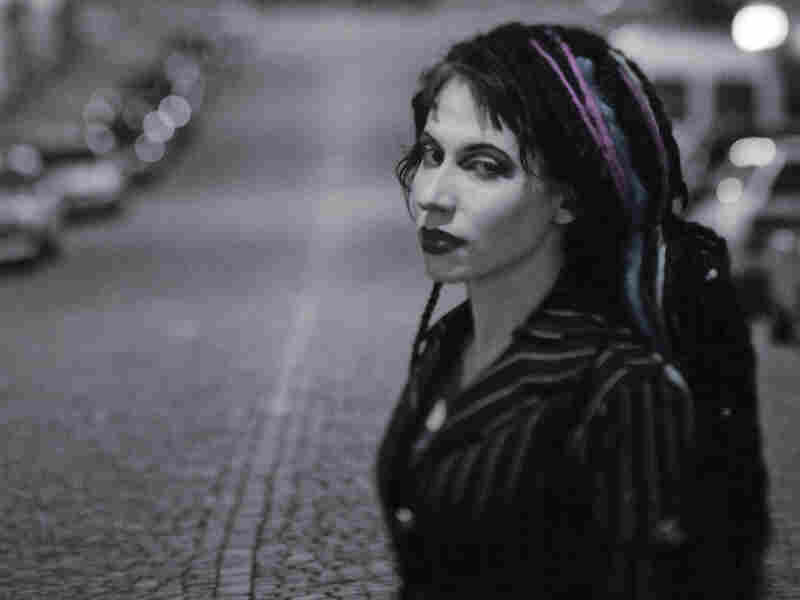 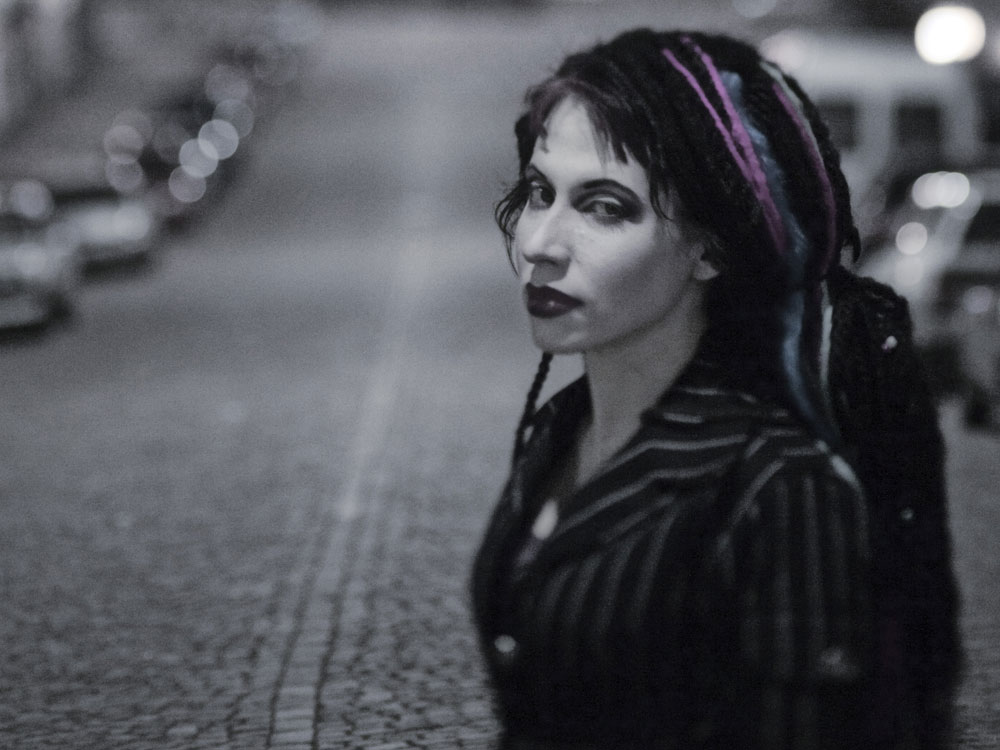 Yet for all its darkness, Purge is an engrossing read. The novel's setup evokes both noir and fairy tales. Zara, a desperate, battered young woman, is from far away. She seeks refuge in a rickety home on the edge of the woods. Aliide, the cunning, solitary woman who takes her in, is skilled in the powers of herbs. Oksanen clues us in that, as in both noir and fairly tales, neither character is completely what she appears to be. As Aliide cares for Zara and Zara gets her bearings, we witness a psychic game of cards in which each woman carefully reveals a piece of her history, debating mightily with herself if presenting a sliver of truth will harm her cause or perhaps save her.

What's at stake for Zara is straightforward. She needs Aliide to help her get away from her captors, two Russian Mafiosi whose trade is beating and raping young women into forced prostitution in Germany. But what reason Aliide would have for risking the seemingly peaceful life she leads is teased out, taking the story back to Estonia in the '40s and '50s, and uncorking a past full of betrayal and pettiness, of living in hiding and speaking with your head bowed. Soviet-occupied Estonia is full of people abandoned to terrible violations and lasting humiliations; some of it at the hand of the government, some of it caused by human weakness.

The novel's plot early on presents a tangible reason for Zara's sudden appearance at Aliide's home. It's an occult, more meaningful connection shared between the two women, though, that Purge is taken up with exploring. And it's the awful basis for this bond between the women -- one that has warped Aliide's life for so long -- that will either push Aliide toward aiding Zara or toward washing her hands of her. The novel's conclusion is Aliide's reckoning, but it leaves one wondering what the final cost of the Soviet era will be for so many more.

Aliide Truu stared at the fly, and the fly stared back. Its eyes bulged and Aliide felt sick to her stomach. A blowfly. Unusually large, loud, and eager to lay its eggs. It was lying in wait to get into the kitchen, rubbing its wings and feet against the curtain as if preparing to feast. It was after meat, nothing else but meat. The jam and all the other canned goods were safe -- but that meat. The kitchen door was closed. The fly was waiting. Waiting for Aliide to tire of chasing it around the room, to give up, open the kitchen door. The flyswatter struck the curtain. The curtain fluttered, the lace flowers crumpled, and carnations flashed outside the window, but the fly got away and was strutting on the window frame, safely above Aliide's head. Self-control! That's what Aliide needed now, to keep her hand steady.

The fly had woken her up in the morning by walking across her forehead, as carefree as if she were a highway, contemptuously baiting her. She had pushed aside the covers and hurried to close the door to the kitchen, which the fly hadn't yet thought to slip through. Stupid fly. Stupid and loathsome.

Aliide's hand clenched the worn, smooth handle of the flyswatter, and she swung it again. Its cracked leather hit the glass, the glass shook, the curtain clips jangled, and the wool string that held up the curtains sagged behind the valance, but the fly escaped again, mocking her. In spite of the fact that Aliide had been trying for more than an hour to do away with it, the fly had beaten her in every attack, and now it was flying next to the ceiling with a greasy buzz. A disgusting blowfly from the sewer drain. She'd get it yet. She would rest a bit, then do away with it and concentrate on listening to the radio and canning. The raspberries were waiting, and the tomatoes -- juicy, ripe tomatoes. The harvest had been exceptionally good this year.

Aliide straightened the drapes. The rainy yard was sniveling gray; the limbs of the birch trees trembled wet, leaves flattened by the rain, blades of grass swaying, with drops of water dripping from their tips. And there was something underneath them. A mound of something. Aliide drew away, behind the shelter of the curtain. She peeked out again, pulled the lace curtain in front of her so that she couldn't be seen from the yard, and held her breath. Her gaze bypassed the fly specks on the glass and focused on the lawn in front of the birch tree that had been split by lightning.

The mound wasn't moving and there was nothing familiar about it except its size. Her neighbor Aino had once seen a light above the same birch tree when she was on her way to Aliide's house, and she hadn't dared come all the way there, instead returning home to call Aliide and ask if everything was all right, if there had been a UFO in Aliide's yard. Aliide hadn't noticed anything unusual, but Aino had been sure that the UFOs were in front of Aliide's house, and at Meelis's house, too. Meelis had talked about nothing but UFOs after that. The mound looked like it came from this world, however -- it was darkened by rain, it fit into the terrain, it was the size of a person. Maybe some drunk from the village had passed out in her yard. But wouldn't she have heard if someone were making a racket under her window? Aliide's ears were still sharp. And she could smell old liquor fumes even through walls. A while ago a bunch of drunks from the next house over had driven out on a tractor with some stolen gasoline, and you couldn't help but notice the noise. They had driven through her ditch several times and almost taken her fence with them. There was nothing but UFOs, old men, and dim-witted hooligans around here anymore. Her neighbor Aino had come to spend the night at her house numerous times when those boys' goings-on got too crazy. Aino knew that Aliide wasn't afraid of them -- she'd stand up to them if she had to.

Aliide put the flyswatter that her father had made on the table and crept to the kitchen door, took hold of the latch, but then remembered the fly. It was quiet now. It was waiting for Aliide to open the kitchen door. She went back to the window. The mound was still in the yard, in the same position as before. It looked like a person -- she could make out the light hair against the grass. Was it even alive? Aliide's chest tightened; her heart started to thump in its sack. Should she go out to the yard? Or would that be stupid, rash? Was the mound a thief's trick? No, no, it couldn't be. She hadn't been lured to the window, no one had knocked at the front door. If it weren't for the fly, she wouldn't even have noticed it before it was gone. But still. The fly was quiet. She listened. The loud hum of the refrigerator blotted out the silence of the barn that seeped through from the other side of the food pantry. She couldn't hear the familiar buzz. Maybe the fly had stayed in the other room. Aliide lit the stove, filled the teakettle, and switched on the radio. They were talking about the presidential elections and in a moment would be the more important weather report. Aliide wanted to spend the day inside, but the mound, visible out of the corner of her eye through the kitchen window, disturbed her. It looked the same as it had from the bedroom window, just as much like a person, and it didn't seem to be going anywhere on its own. Aliide turned off the radio and went back to the window. It was quiet, the way it's quiet in late summer in a dying Estonian village -- a neighbor's rooster crowed, that was all. The silence had been peculiar that year -- expectant, yet at the same time like the aftermath of a storm. There was something similar in the posture of Aliide's grass, overgrown, sticking to the windowpane. It was wet and mute, placid.

She scratched at her gold tooth, poked at the gap between her teeth with her fingernail -- there was something stuck there -- and listened, but all she heard was the scrape of her nail against bone, and suddenly she felt it, a shiver up her back. She stopped digging between her teeth and focused on the mound. The specks on the window annoyed her. She wiped at them with a gauze rag, threw the rag in the dishpan, took her coat from the rack and put it on, remembered her handbag on the table and snapped it up, looked around for a good place to hide it, and shoved it in the cupboard with the dishes. On top of the cupboard was a bottle of Finnish deodorant. She hid that away, too, and even put the lid on the sugar bowl, out of which peeped Imperial Leather soap. Only then did she turn the key silently in the lock of the inner door and push it open. She stopped in the entryway, picked up the juniper pitchfork handle that served as a walking stick, but exchanged it for a machine-made city stick, put that down, too, and chose a scythe from among the tools in the entryway. She leaned it against the wall for a moment, smoothed her hair, adjusted a hairpin, tucked her hair neatly behind her ears, took hold of the scythe again, moved the curtain away from the front of the door, turned the latch, and stepped outside. 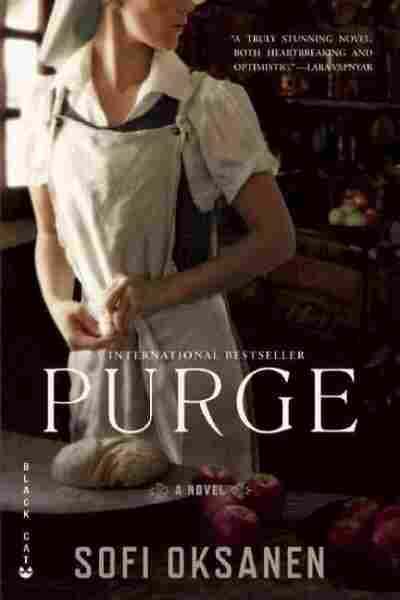 by Sofi Oksanen and Lola Rogers