Accessibility links
Move Around on Long Flights to Prevent Blood Clots A new study shows that 1 in 4,500 travelers — particularly those who take long flights and fly often — will develop a blood clot. Although not every traveler has the same risk, doctors and even some airlines suggest staying alert and moving around in-flight.

Listen
Move Around on Long Flights to Prevent Blood Clots

What puts you at risk of getting a blood clot while flying? 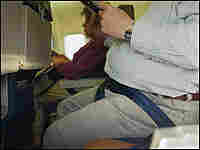 Researchers and doctors say obesity, blood abnormalities and being on birth control pills — in combination with other factors — can increase the chance of developing a blood clot during travel. Charles O'Rear/Corbis hide caption 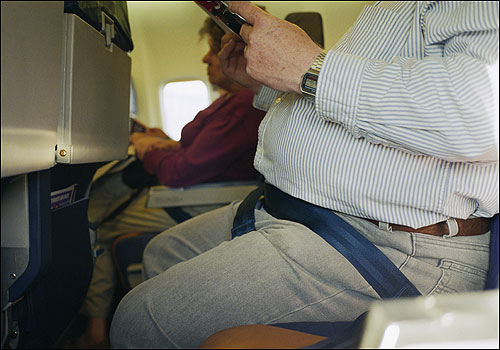 Researchers and doctors say obesity, blood abnormalities and being on birth control pills — in combination with other factors — can increase the chance of developing a blood clot during travel.

If your travel plans call for a long airplane flight — say to Europe or Asia — experts have some advise to help cut the risk developing a of blood clot.

New research from the World Health Organization shows that about 1 in 4,500 travelers will develop a clot. They're most likely caused by passengers not moving around enough.

The classic struggle of airplane travel is the cramp factor.

"It's too small to move around, so I just crushed my body," Jong says. She curls up to show how she sat with her legs folded into her chest.

"I can barely move my knee up and down two inches behind the seat, so I kind of prefer to get up and walk up and down the aisles," says Jong's friend Adam Nord. He is over 6 feet tall and says that after many uncomfortable flights, he feels Jong's pain.

The importance of moving around in-flight is highlighted by a new report from the World Health Organization based on two studies.

It shows that travelers who take long flights — more than four hours in length — face a two- to three-fold increase in the risk of developing a blood clot.

John A. Heit, M.D., a hematologist at the Mayo Clinic, says this risk is nothing to panic over — the number of clots is still quite small. But, he says, blood clots can be dangerous.

"When most people think of blood clots, they think of clots in arteries, like an artery to heart or brain that would cause either a heart attack or stroke," Heit says.

But what we're talking about here, he says, is completely different. These blood clots form deep inside the legs, so they're called "deep vein thromboses," or DVT's for short.

Immobility — like after surgery or a long plane flight or car ride — increases the risk of developing a clot. They can become serious when the blood from these veins feed back up to the lungs.

"And so if these clots dislodge, they travel to the lungs, it is termed a pulmonary embolism, which is potentially fatal," Heit says. "About 20 to 25 percent of patients suffer sudden death."

The sudden death of a young woman flying between Australia and Great Britain in 2000 led to new research aimed at understanding exactly who is at risk of developing clots.

The World Health Organization study found that about 1 in 4,500 airline passengers will develop this kind of clot. But not every traveler has the same risk.

Lead researcher Frits Rosendaal of Leiden University in the Netherlands says that women who are taking birth control pills or hormone therapy and are severely overweight face a 30-fold increased risk.

People who have just had surgery or fractured a leg are at increased risk, too.

And the risks stack up.

Travelers who know they're at a higher risk can wear compression stockings. Unlike conventional panty hose, these special stockings compress from the bottom of the leg to encourage blood flow.

And researchers say the step every traveler should take on long flights is to walk around some during the flight, or at least move your legs.

To make that possible in the confines of an economy class seat, Northwest Airlines introduces its trans-continental passengers to flight attendants who are dressed in exercise clothes.

During a short video, the flight attendant demonstrates a simple technique to promote circulation. Passengers are told to flex their toes back and then point them forward.

As simple as it sounds, Heit says this is what he does when he flies, and it's really all that's needed.

"It keeps the blood moving in the veins and lowers the predisposition for the blood to clot," Heit says. "So yes, at this point I think it's the most useful recommendation."

Moving your legs about every two hours is the general advice. Rosendaal says that in order to do this, people really need to be awake. Cat naps, he says, are OK.

"People should not get into a really deep sleep," Rosendaal says. "I think that's not a good idea."

So that means keep alcohol consumption to a minimum. And Rosendaal advises to leave the sleeping pills at home.

What is Your Risk of Getting DVTs While Flying?

The WRIGHT project and the World Health Organization found that a passenger on a long haul flight has roughly a 1 in 4,500 chance of developing this sort of blood clot.

WRIGHT project manager, Frits Rosendaal, M.D., Ph.D. of Leiden University says his study suggests that three types of factors can boost your risk of developing a blood clot — how often you take long flights, your particular physiology, and what you do on the plane.

— Frequency: Frequent fliers are at higher risk of developing clots. Taking five flights within a three month period increases you chances of forming a blood clot by a factor of three, when compared to only taking one or two flights in three months.

— Weight: Obesity seems to be a risk factor. Having a body mass index (BMI) over 30 doubles your chance of developing thrombosis.

— Height: People who are extremely tall or short also have higher risk. Anyone over 6'3" or under 5'3" is six times more likely to form blood clots on a long flight.

— Alcohol: Drinking so much alcohol that you fall into a deep sleep and don't budge for hours at a time doubles your chances of developing a blood clot.