Accessibility links
Sam Newsome: A Soprano Sax 'Soliloquy' Soprano saxophone can be an unforgiving instrument. It's hard to play in tune, and many players get a pinched or nasal tone like it has a bad cold. Its biggest proponents — Steve Lacy, Lol Coxhill — do influence Sam Newsome, but he stakes out his own turf with eerie-sounding, hoarse and hollow split-tones. 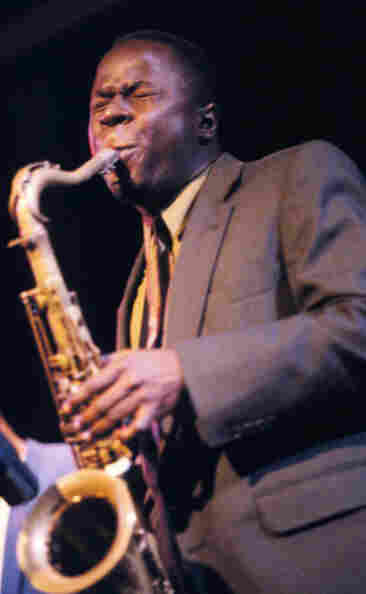 Sam Newsome fine-tunes his pitches by swinging the bell of his horn past the microphone to exploit the Doppler effect. Andrew Lepley/Redferns hide caption

Soprano saxophone can be an unforgiving instrument. It's hard to play in tune, and many players get a pinched or nasal tone like it has a bad cold. Still, a number of modern musicians have mastered the horn, like Steve Lacy, Lol Coxhill and Evan Parker -- and now Sam Newsome, as announced by Blue Soliloquy. He's obviously listened to his forerunners, Lacy especially. But Newsome stakes out his own turf, with eerie-sounding, hoarse and hollow split-tones -- two notes sounded at once, through tricky fingerings and precise breath control. He volleys between pure tones and split ones, for self-contained call and response.

Newsome's solo music departs from the opulent sound of his old world music jazz band Global Unity. But on Blue Soliloquy, Newsome still draws on global traditions like split-tone Tuvan throat singing, as well as bamboo flute musics from Japan and the Indian subcontinent. And he uses 1920s-style slap-tongue saxophone technique to turn his horn into a sub-Saharan percussion instrument.

Newsome is also interested in quarter-tones: playing notes between the ones on piano to assemble a 24-note scale. It's a way to use soprano's dicey intonation to his advantage. The one borrowed tune on his new album is Thelonious Monk's "Blue Monk," radically recast in a quarter-tone version. Squeezing his in-between notes into Monk's blues melody, Newsome holds it up to a fun-house mirror.

One way solo saxophonists keep everything from sounding the same is to concentrate on one particular technique or idea per piece. Sam Newsome might, for example, zero in on the practice of circular breathing, a technique that lets him keep playing continuously even while drawing a breath.

Like fellow soprano ace Jane Ira Bloom, Newsome also fine-tunes his pitches by swinging the bell of his horn past the microphone to exploit the Doppler effect: the way a sound moving toward you appears higher pitched than one moving away. Think of how the tone of a train whistle drops as it passes. At his most radical, Newsome blends his various strategies together, juggling quarter-tones and circular breathing and the Doppler effect to make music that sounds like nothing else I know, except maybe the bagpipes.

Newsome says all the pieces on Blue Soliloquy are blues of one kind or another. In truth, the connection to blues form is often tenuous. Yet there's a striking unity of effect: His varied blues lay out and loop back to certain striking techniques while creating their own acoustical space, whether a piece is simple or complex, harsh or conventionally beautiful. Like other soprano virtuosos, Sam Newsome coaxes a world of music from one reluctant horn.