Accessibility links
Plains Farmers Learn from Past as Aquifer Depletes The enormous Ogallala Aquifer was a source of hope for Great Plains farmers who survived the Dust Bowl. But widespread use of the underground aquifer for irrigation is depleting the water supply, leaving farmers with yearly decisions about how to use the water and how to conserve it for future generations.

Listen
Plains Farmers Learn from Past as Aquifer Depletes 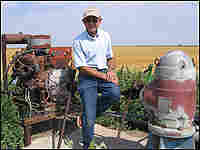 Dryland farmer Bill Mai sits at the well his father drilled into the Ogallala Aquifer in 1948. Since then, the water table beneath the Mai Farm has dropped about 80 feet. Kate Davidson, NPR hide caption 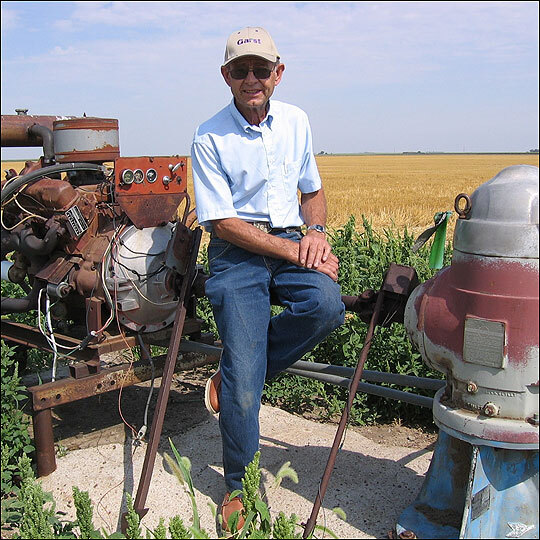 Dryland farmer Bill Mai sits at the well his father drilled into the Ogallala Aquifer in 1948. Since then, the water table beneath the Mai Farm has dropped about 80 feet.

About a quarter of a million people left the Great Plains during the Dust Bowl of the 1930s, but for the families who stayed, hope lay in a massive aquifer of clean, fresh water right beneath their feet.

The Ogallala Aquifer, which lies under parts of eight states, was like lifeblood for Great Plains farmers who today pump billions of gallons of water from the underground supply to their crops annually. But widespread use of the Ogallala for irrigation is depleting the aquifer in some areas, leaving farmers with yearly decisions about how to use the water and how to conserve it for future generations.

The Ogallala, a vast formation of sand and gravel, is part of a larger aquifer that once held more than 3 billion acre-feet of water, roughly the equivalent of 3 billion acres of land covered in a foot of water. The aquifer's depth varies by state. In parts of Nebraska, there are still 1,000 feet of water saturating its sand and gravel. But in parts of Texas, Oklahoma and Kansas — states that had less water to begin with — the water table has dropped steeply.

Just outside of Colby, Kan., farmer Lon Frahm uses 38 sprinklers to pump water over 5,000 acres of farmland. His center-pivot irrigation system sprinkles 600 gallons per minute on his corn, making up for where Mother Nature leaves off in a semi-arid zone that gets less than 20 inches of rain a year.

Frahm estimates that he pumps around 2 billion gallons of water from the Ogallala annually. In recent years, his wells have dropped about 6 inches, though in years when there is more rain, he uses less water. As a member of the Kansas water board, Frahm regularly wrestles with the question of what to do as the water table drops.

"We've got some people that use the analogy of oil. What's the difference between taking oil from the ground, and taking water from the ground? It's a resource not doing any good down there," Frahm says, citing a view he often hears from other farmers.

Kansas has created local groundwater management districts to manage water use in the state. But some believe that only a wholesale shift in the economy can reduce the demand on the Ogallala.

Improving on the Past

Some farmers are returning to dryland farming — raising crops without irrigation — rather than depending on the Ogallala for hydration. Bill Mai, a farmer in Sharon Springs, Kan., was born in the middle of the Dust Bowl. During the worst of the Dust Bowl, his parents considered moving away, but they mustered the will to stay, and discovered they could tap the Ogallala for their crops.

But Mai realized years ago that there wouldn't always be enough water for him to irrigate, so he modified pre-Dust Bowl farming methods to cultivate his wheat and corn crop. In the early 20th century, farmers plowed millions of acres of the Great Plains to plant wheat. Their plows freed soil from the roots of native grass that had evolved over millions of years to hold the earth in place. Once the wheat withered away, the loose soil blew black blizzards across the Plains. At its peak, the Dust Bowl covered 100 million acres.

Rather than repeat the mistakes of the past, Mai now protects his soil by leaving stubble from previous harvests intact. Rain falls on the ground cover, creating a spray that drains down into the soil. He says that dryland farming will help conserve the Ogallala for his grandchildren.

"The water here is probably the most valuable natural resource that we have for every purpose that there is," he says. "If you're looking at economic development and we don't have water, you're dead in the water. Literally."