Accessibility links
Freeway And Jake One Release A 'Stimulus Package' Times have not been kind to the hip-hop industry. Philadelphia rapper Freeway and Seattle producer Jake One have come up with a novel response, especially in the era of digital music. Their new collaboration, The Stimulus Package, comes with some of the most elaborate packaging ever designed for a hip-hop album. 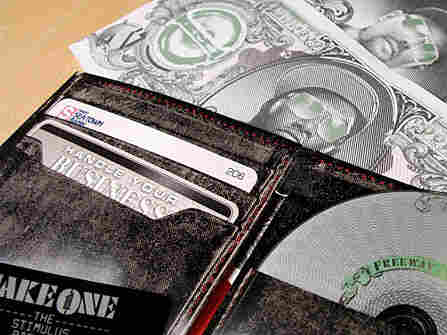 The physical version of The Stimulus Package. courtesy of Rhymesayers hide caption

Throw Your Hands Up

You're not supposed to judge a book -- or an album -- by its cover, but desperate times call for creative measures.

The Stimulus Package arrives as a folded wad of oversized paper bills, each bearing the face of either rapper Freeway or producer Jake One; on the backs are the liner notes. The actual CD fits snugly inside a faux wallet whose billfold will hold the paper money. There's an added bonus: a black credit card that contains a code to download the instrumental version of the album. If nothing else, The Stimulus Package holds up the package side of the equation.

Just a few years ago, Freeway was part of Jay-Z's seemingly insoluble Roc-A-Fella clique, while producer Jake One crafted beats for 50 Cent and G-Unit. Now, both are independents, trying to survive the rap industry's implosion. This change in fortune does not escape unmentioned.

The Stimulus Package is a compelling gambit, an attempt to puncture digitally induced apathy by convincing hip-hop fans to care about a physical CD again. But what about the music?

In contrast to the innovative outer shell, the album's 15-song interior is more familiar and conventional, a workhorse effort of consistency from two hip-hop veterans. The pair do what they do best, and for Freeway, that means rhyming with an impassioned -- some might say anguished -- delivery about rap, sex, guns and, especially, drugs.

If Freeway's topical range shares much in common with the ghetto dramas of the blaxploitation era, Jake One appropriately mines the catalog of '70s and '80s soul for his inspiration. It's a more austere sound compared with some of Freeway's plusher past efforts, but these are leaner times, after all, and Jake One shows deft skill in recycling past classics into something new.

It's encouraging to think that other artists might follow the lead of Freeway and Jake One and restore some luster to the long-faded craft of cover-art design. Better packaging won't save the music industry, but if The Stimulus Package heads the charge for a last stand, at least Freeway and Jake One lead with a brazen step forward.