Accessibility links
Movie Review - 'The Secrets In Their Eyes' - 'Secrets' And Lies Drive An Oscar-Worthy Thriller Juan Jose Campanella's The Secret in Their Eyes, took the foreign-film trophy for a story about a retired investigator who sets out to solve -- and write a book about -- the rape and murder case that stymied him 25 years ago. 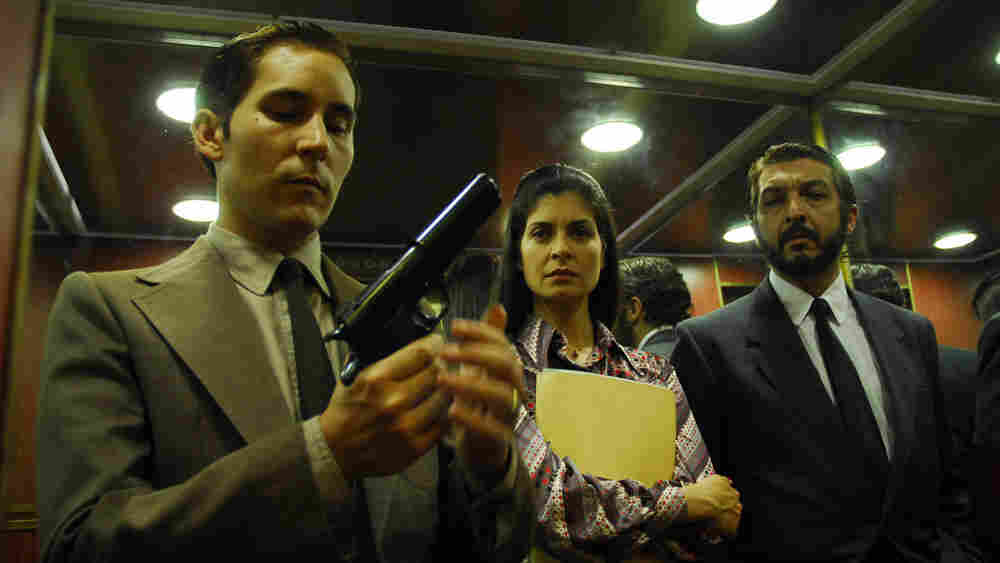 Dark Matters: A retired investigator (Ricardo Darin, right) decides to revisit a murder case that stumped him years ago — sparking flashbacks that recount both the shortcomings of the police (including Javier Godino) and the hero's unrequited love for a former colleague (Soledad Villamil). Sony Pictures Classics hide caption

The Secret
In Their Eyes

Rated R for a rape scene, violent images, some graphic nudity and language

At last month's Academy Awards, the biggest upset -- virtually the only upset from an oddsmaker's point of view -- came when Argentina's The Secret in Their Eyes took home the statuette for Best Foreign Language Film.

Most observers had pegged that category as a two-way race between France's Godfather-like crime epic A Prophet and Germany's austere social critique The White Ribbon. Instead, Oscar voters went for a noirish thriller that splits the difference between the two -- a taut murder mystery with a political conscience. That it does so with romance and not a little wit probably helped.

As the opening credits roll, writer-director Juan Jose Campanella shows us a one-time criminal investigator struggling to pen a novel about a crime that's haunted him for decades. In the mid-1970s, Benjamin Esposito (Ricardo Darin) had doggedly pursued a case -- the brutal rape and murder of a bank employee's wife -- despite official efforts to discourage him. He'd become emotionally involved, and empathetic. But the nearer he'd gotten to solving the crime, the stranger and more labyrinthine it had become.

Determined to bring literary closure to a case he'd been unable to close legally, he returns to his old Supreme Court stomping grounds. His stride is halting now, his hair streaked with gray, but his eyes still sparkle when he greets Irene Menendez Hastings (Soledad Villamil), a judge he worked with -- and carried a torch for -- some 25 years earlier.

Robert Siegel talks with Campanella about the making of the film.

When she hears that his novel will rehash the Morales case, though, her own eyes cloud. The original investigation had led both of them down dark legal alleyways that became more treacherous the further they ventured: In flashbacks, we learn of trumped-up charges, forced confessions, political interference and a killer still on the loose -- until Ben and a brilliant but alcoholic co-worker (comedian Ricardo Morales) track him one day to a soccer stadium.

The director sends his cameras hurtling after their suspect (a creepily feral Javier Godino) as he burrows deep into the bowels of the stadium -- catching up with him, losing him, leaping over banisters with him, even chasing him onto the field, where thousands of screaming fans boo as he interferes with a goal. It's a pretty visceral chase sequence, as tactile as it is frenetic. It's also, as Ben will explore years later in his novel, just a prelude to a decades-long nightmare that's far less public.

'We Liked Watching The Three Stooges Together'

'It's The Look In Their Eyes, That's The Key'

'Why Didn't You Take Me With You?'

Leaping around in time, Campanella uses the aftermath of this one sadistic murder case to expose not just law-enforcement shortcomings but fault lines in Argentine society. Class distinctions interfere with everything from justice to romance; official pressure to forgive transgressions is countered by stubborn personal quests for justice.

Because the flashbacks take place in an era just before Argentina was brutalized by a military dictatorship -- a time of death squads, seared into the nation's memory -- the quest for justice is doubtless a given for Argentine audiences. And while American viewers don't start with the same reference point, Campanella, who's directed quite a few episodes of Law & Order: SVU, is just the guy to fill us in.

He's hampered somewhat by overheated source material and a final twist that's more than a trifle lurid. Still, there's no shortage of real social anguish for him to play with: official paranoia, government corruption, a political underworld that prizes criminality. The Secret in Their Eyes finds secrets everywhere -- even in what's driving Ben and Irene as they separately examine the decisions they made back in the 1970s. For both of them, as for their country, accurate remembrance of that period is crucial. Neither was an open book, but Ben has now written one, and Irene will insist on some edits.