Accessibility links
Salon Owner Fights Arizona To Restore Fish Pedicures Cindy Vong is taking the state to court after the cosmetology board pulled the plug on her fish-pedicure business. The board says the practice is unsanitary, but Vong's attorney disputes the claim the spa fish put anyone at risk.

In Arizona, salon owner Cindy Vong is taking the state to court after the cosmetology board pulled the plug on her fish-pedicure business. Peter O'Dowd hide caption 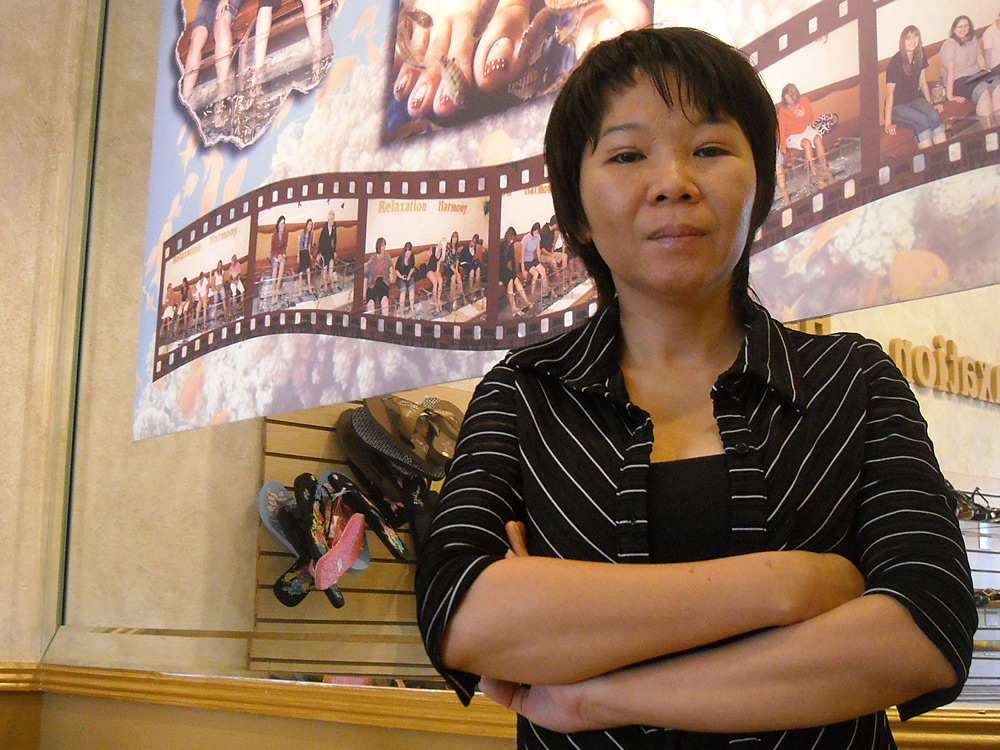 In Arizona, salon owner Cindy Vong is taking the state to court after the cosmetology board pulled the plug on her fish-pedicure business.

A tiny 2-inch-long, toothless fish is causing a big stir in Arizona.

Cindy Vong, a Phoenix-area salon owner, is taking the state to court after the cosmetology board pulled the plug on her fish-pedicure business.

In a 2008 promotional video, a group of women sits across the back wall of LaVie Nails and Spa with their feet plunged into a tank of water. Inside, little carp feast on calloused flesh. As the sucker mouths latch on, the women roar with laughter.

"It's a good business idea," Vong says. "Business was booming."

Business is not booming anymore. Vong says it's been about a year since the state ordered her to stop fish pedicures. At the time, she was the only one in town offering the service. Vong now sells shoes and stilettos along the back wall, but they're not nearly as popular as the $30 pedicures were. She has laid off four workers, and the traditional sound of nail files has replaced the laughter.

Fish As A Tool

In 2008, the fish-pedicure business took off in the U.S. The idea was imported from Asia where the Garra rufa fish have smoothed calloused skin for years. Almost immediately, the practice raised eyebrows, and now at least two dozen states say fish pedicures are illegal because they are unsanitary. 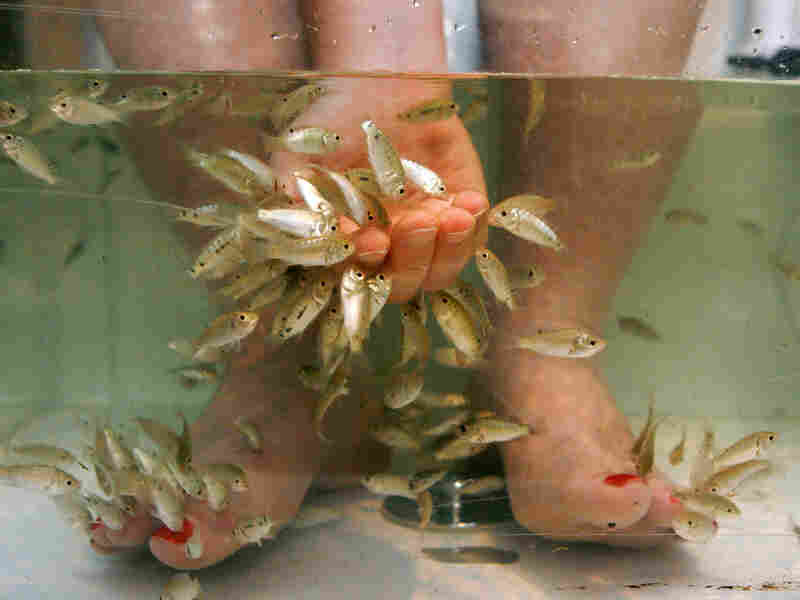 Fish pedicures, shown here at a salon in Alexandria, Va., in 2008, are facing controversy. At least two dozen states say the practice is illegal because it's unsanitary. Jacquelyn Martin/AP hide caption 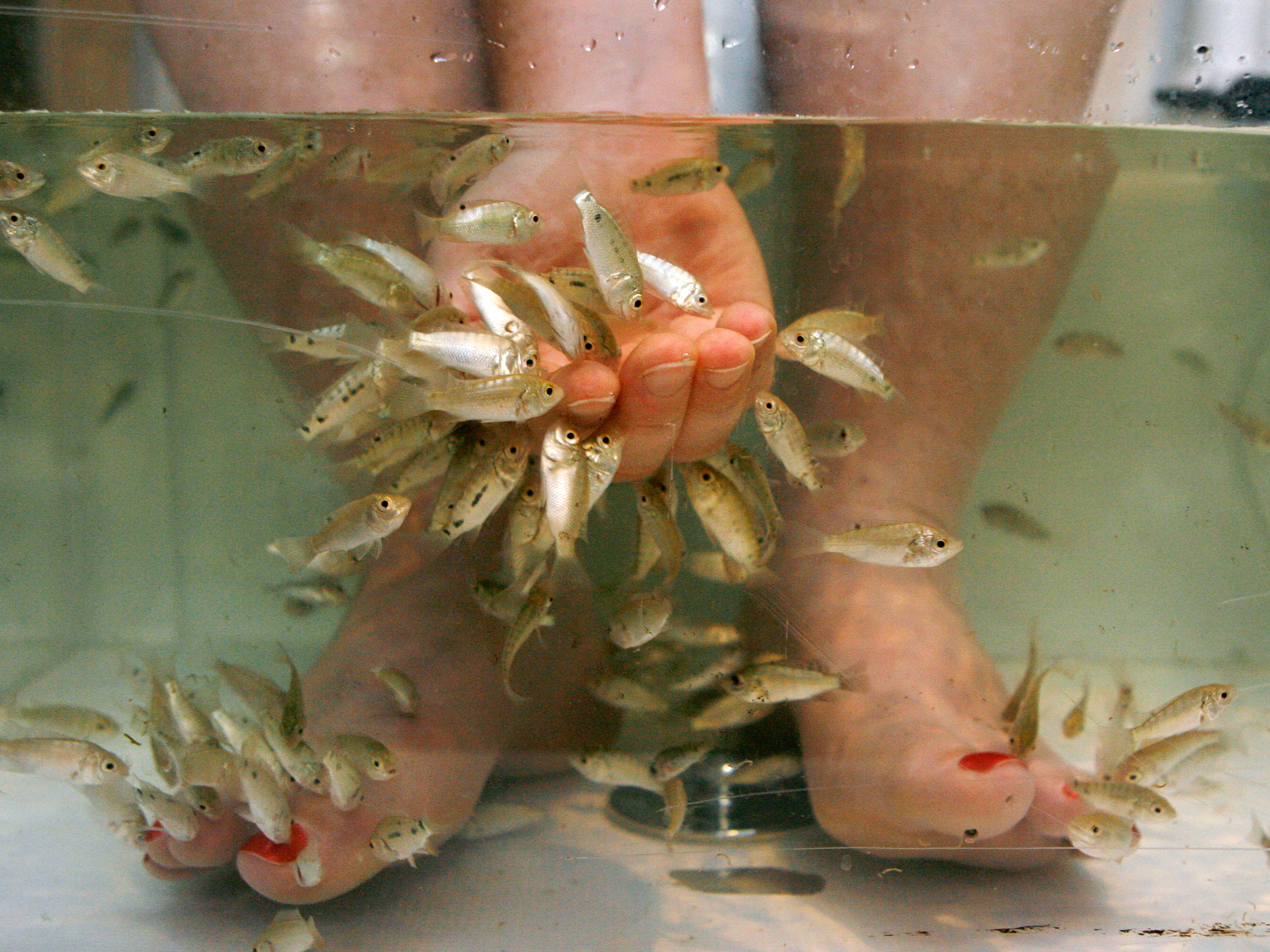 Fish pedicures, shown here at a salon in Alexandria, Va., in 2008, are facing controversy. At least two dozen states say the practice is illegal because it's unsanitary.

"We consider the fish being a tool," says Donna Aune, who runs Arizona's Board of Cosmetology. "Every tool that comes in contact with a client in Arizona needs to be disinfected or thrown away."

Since you can't spray a living fish with Ajax or toss it the trash with each pedicure, Aune says the practice is not allowed in Arizona.

Robert Spalding, a podiatrist in Tennessee -- another state where spa fish are banned -- supports that ruling.

"There's not been any reported cases to me directly on this, but the ingredients for a problem certainly exist for this type of service," Spalding says.

Spalding wrote a book called Death by Pedicure, which tracks the dangers of unsanitary salon practices. He says cuts from a razor blade, or even a mosquito bite, are big enough to transmit salmonella from a fish.

"The fact they can culture this bacteria out of their mouth -- there doesn't need to be really anything more done to prove this is a risk factor for people," he says.

And then, some feet are just dirty. Salon owner Marie Bernat sees warts and fungus all the time. She worries about infected water.

"They may be in the beginning stages, but they didn't know that yellow discoloration or that thick nail is actually a fungus, and fungus is highly contagious," she says.

Vong's attorney, Clint Bolick, disputes the claim that spa fish put anyone at risk. Customers who used the service say Vong kept the fish tanks clean and regularly replaced the water. Bolick says no one ever complained about getting sick.

"The bigger picture is really the right to make an honest living," Bolick says.

Bolick works for the Goldwater Institute, a libertarian watchdog group that fights government intrusion into private business. He's suing the state cosmetology board to reverse the ban. Already, he's getting calls from business owners in other states who face similar bans.

"It's different -- and some people think it's icky when they hear about it," he says. "Nobody is forced to get a spa fish treatment, but they sure ought to have the right to do it."

As Vong ponders the future, her customers must settle for a traditional foot bath.

Customer Chelsea Brecia says that won't be a problem. She says the thought of hungry fish suckling her toes is just freaky.

"I saw the movie Piranha when I was young and it stuck with me," she says. "So me putting my feet in a tank with biting fish is not going to happen."

A judge is expected to make a ruling in the case this spring.