Accessibility links
Book Review: 'Beatrice And Virgil' by Yann Martel The author of Life of Pi returns with a story that arranges a stuffed donkey and monkey in an allegory about the Holocaust. Reviewer Jane Ciabattari says Beatrice and Virgil is ambitious and at times artful, but ultimately misguided.

From Yann Martel, A Novel Of Atrocity And Taxidermy

From Yann Martel, A Novel Of Atrocity And Taxidermy 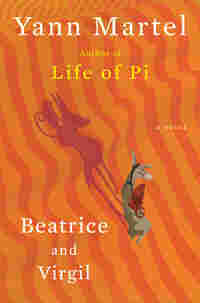 Canadian author Yann Martel's second novel, Life of Pi -- a parable in which an Indian zookeeper's son named Pi Patel and a 450-pound Bengal tiger manage to survive for 227 days on a lifeboat -- was an international phenomenon, winning Britain's 2002 Man Booker award and selling millions of copies worldwide.

With his follow-up, Beatrice and Virgil, Martel is back with another parable involving animals, this time with mixed results.

Henry, the narrator, is an author not unlike Martel, with a recent literary success, and worldwide fans, and a desire to write about the Holocaust in a new way (he mentions Orwell's Animal Farm as one model). He spends five years writing a "flip book" on this subject -- a book in which one half is fiction, the other half nonfiction, with two front covers. After the book is rejected, Henry stops writing and moves with his wife from Canada to Europe. A fan's letter lures him to the shop of a sinister taxidermist, also named Henry, who asks his help to complete a play. It's called A 20th Century Shirt and turns out to be about an event called "the Horrors" and how it affected Beatrice, a donkey, and Virgil, a howler monkey, both stuffed and on display in the shop. 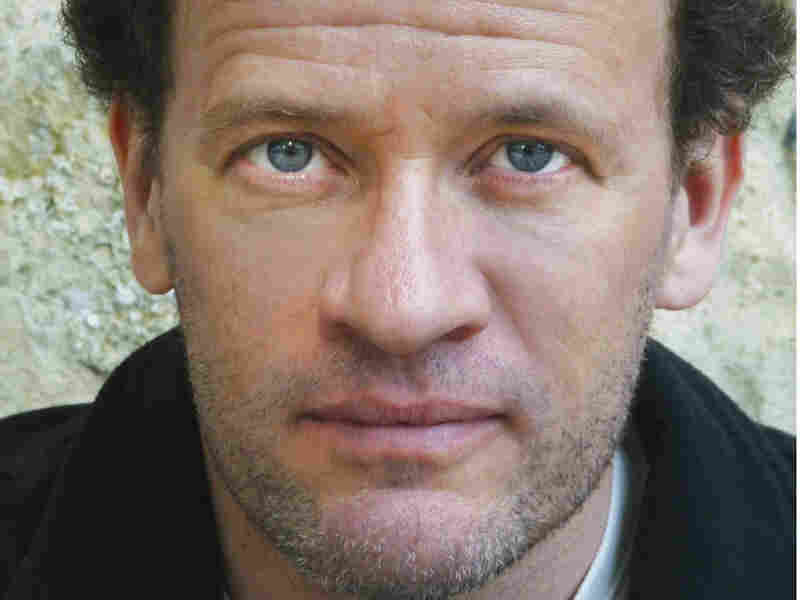 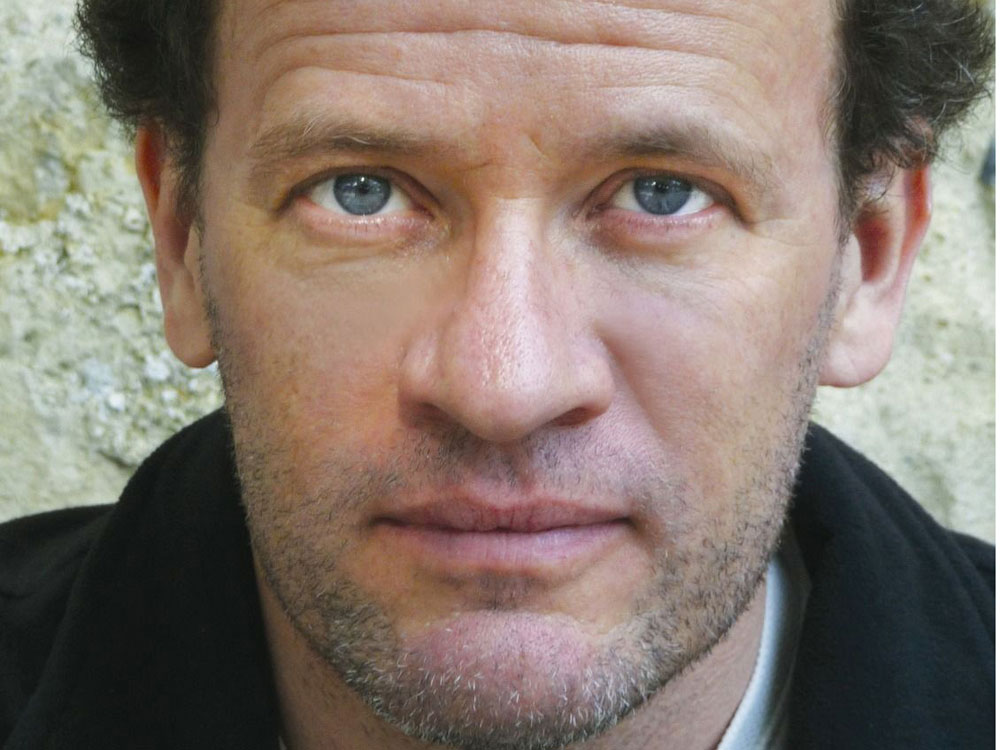 Martel uses riddles, games, literary allusions, chunks of text (a Flaubert short story, for instance) and deceptively simple language to trace his narrator's journey into collaboration and confrontation with evil. But he's not as convincing as he was in Life of Pi.

The dialogue between the increasingly anguished Beatrice and Virgil, describing their ordeals, is sophisticated and moving -- indeed, humanly artful. (Martel mentions Diderot and Beckett in passing.) And the book's ending, which moves out of animal parable back into human factual references to the Holocaust, is truly disturbing. But Martel oversimplifies and sets up questionable premises throughout.

At one point Virgil asks Beatrice the question Martel ponders throughout the novel: "How are we going to talk about what happened to us one day when it's over?" Beatrice and Virgil is not the answer. Martel's latest is an ambitious, troubling, but ultimately misguided effort.

(Virgil and Beatrice are sitting at the foot of the tree. They are looking out blankly. Silence.)

VIRGIL: What I'd give for a pear.

VIRGIL: Yes. A ripe and juicy one.

BEATRICE: I've never had a pear.

BEATRICE: In fact, I don't think I've ever set eyes on one.

VIRGIL: How is that possible? It's a common fruit.

BEATRICE: My parents were always eating apples and carrots. I guess they didn't like pears.

VIRGIL: But pears are so good! I bet you there's a pear tree right around here. (He looks about.)

BEATRICE: Describe a pear for me. What is a pear like?

VIRGIL: (settling back) I can try. Let's see . . . To start with, a pear has an unusual shape. It's round and fat on the bottom, but tapered on top.

VIRGIL: A gourd ? You know gourds but you don't know pears? How odd the things we know and don't. At any rate, no, a pear is smaller than an average gourd, and its shape is more pleasing to the eye. A pear becomes tapered in a symmetrical way, its upper half sitting straight and centred atop its lower half. Can you see what I mean?

BEATRICE: I think so.

VIRGIL: Let's start with the bottom half. Can you imagine a fruit that is round and fat?

VIRGIL: Not quite. If you look at an apple with your mind's eye, you will notice that the girth of the apple is at its widest either in the middle of the fruit or in the top third, isn't that so?

BEATRICE: You're right. A pear is not like this?

VIRGIL: No. You must imagine an apple that is at its widest in the bottom third.

BEATRICE: I can see it.

VIRGIL: But we must not push the comparison too far. The bottom of a pear is not like an apple's.

VIRGIL: No. Most apples sit on their buttocks, so to speak, on a circular ridge or on four or five points that keep them from falling over. Past the buttocks, a little ways up, there's what would be the anus of the fruit if the fruit were a beast.

BEATRICE: I see precisely what you mean.

VIRGIL: Well, a pear is not like that. A pear has no buttocks. Its bottom is round.

BEATRICE: So how does it stay up?

VIRGIL: It doesn't. A pear either dangles from a tree or lies on its side.

BEATRICE: As clumsy as an egg.

VIRGIL: There's something else about the bottom of a pear: most pears do not have those vertical grooves that some apples have. Most pears have smooth, round, even bottoms.

VIRGIL: It certainly is. Now let us move north past our fruity equator.

VIRGIL: There comes this tapering I was telling you about.

BEATRICE: I can't quite see it. Does the fruit come to a point? Is it shaped like a cone?

VIRGIL: No. Imagine the tip of a banana.

VIRGIL: The end tip, the one you hold in your hand when you're eating one.

BEATRICE: What kind of banana? There are hundreds of varieties.

BEATRICE: Yes. Some are as small as fat fingers, others are real clubs. And their shapes vary too, as do their taste.

VIRGIL: I mean the regular, yellow ones that taste really good.

BEATRICE: The common banana, M. sapientum. You probably have the Gros Michel variety in mind.

VIRGIL: Better than a monkey. Take the end tip of a common banana, then, and place it on top of an apple, taking into account the differences between apples and pears that I've just described.

VIRGIL: Now make the lines smoother, gentler. Let the banana flare out in a friendly way as it merges into the apple. Can you see it?

BEATRICE: I believe I can.

VIRGIL: One last detail. At the very top of this apple-banana composite, add a surprisingly tough stalk, a real tree trunk of a stalk. There, you have an approximation of a pear.

VIRGIL: It is. In colour, commonly, a pear is yellow with black spots.

VIRGIL: No, not at all. A pear isn't yellow in so bright, lustreless and opaque a way. It's a paler, translucent yellow, moving towards beige, but not creamy, more watery, approaching the visual texture of a watercolour wash. And the spots are sometimes brown.

BEATRICE: How are the spots distributed?

VIRGIL: Not like the spots on a leopard. It's more a matter of areas of shadowing than of real spots, depending on the degree of maturity of the pear. By the way, a ripe pear bruises easily, so it must be handled with care.

VIRGIL: Now the skin. It's a peculiar skin, the pear's, hard to describe. We were speaking of apples and bananas.

VIRGIL: They have smooth, slippery skins.

VIRGIL: A pear does not have so smooth or slippery a skin.

VIRGIL: It is so. A pear has a rougher skin.

VIRGIL: No. But since you mention avocados, a pear is somewhat shaped like an avocado, although the bottom of a pear is usually plumper.

VIRGIL: And a pear becomes thinner in its top half in a more pronounced way than an avocado does. Nonetheless, the two fruits are more or less similar in form.

BEATRICE: I see the shape clearly.

VIRGIL: But you cannot compare their skins! An avocado's skin is as warty as a toad's. An avocado looks like a vegetable with leprosy. The pear is characterized by a thin roughness, delicate and interesting to the touch. If you could magnify it a hundred times, do you know what it would sound like, the sound of fingertips running over the skin of a dry pear?

VIRGIL: It would sound like the diamond of a record player entering a groove. That same dancing crackle, like the burning of the driest, lightest kindling.

BEATRICE: A pear is surely the finest fruit in the world!

BEATRICE: Can one eat it?

VIRGIL: Of course. We're not talking here of the waxy, thuggish skin of an orange. The skin of a pear is soft and yielding when ripe.

VIRGIL: Wait. You must smell it first. A ripe pear breathes a fragrance that is watery and subtle, its power lying in the lightness of its impression upon the olfactory sense. Can you imagine the smell of nutmeg or cinnamon?

VIRGIL: The smell of a ripe pear has the same effect on the mind as these aromatic spices. The mind is arrested, spellbound, and a thousand and one memories and associations are thrown up as the mind burrows deep to understand the allure of this beguiling smell -- which it never comes to understand, by the way.

BEATRICE: But how does it taste? I can't wait any longer.

VIRGIL: Slice a pear and you will find that its flesh is incandescent white. It glows with inner light. Those who carry a knife and a pear are never afraid of the dark.

BEATRICE: I must have one.

VIRGIL: The texture of a pear, its consistency, is yet another difficult matter to put into words. Some pears are a little crunchy.

VIRGIL: No, not at all like an apple! An apple resists being eaten. An apple is not eaten, it is conquered. The crunchiness of a pear is far more appealing. It is giving and fragile. To eat a pear is akin to . . . kissing.

BEATRICE: Oh, my. It sounds so good.

VIRGIL: The flesh of a pear can be slightly gritty. And yet it melts in the mouth.

BEATRICE: Is such a thing possible?

VIRGIL: With every pear. And that is only the look, the feel, the smell, the texture. I have not even told you of the taste.

BEATRICE: (sadly) I wish you had a pear.

VIRGIL: And if I had one, I would give it to you.