Accessibility links
How I Met Your Father: A Mom's Memories The promise of free food — and an ill-fated trip to the restroom — jump-started the courtship of Florence and Joe Newman. Their daughter recently quizzed Florence, 81, about how it all happened. 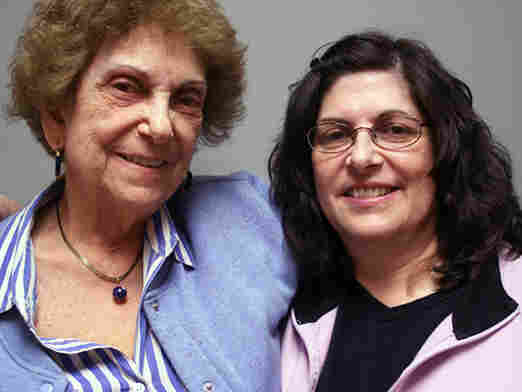 The conversation between Florence Newman and her daughter, Audrey, was recorded as part of the StoryCorps Memory Loss Initiative. The pair spoke at a StoryCorps booth in Commack, N.Y. StoryCorps hide caption

As Florence Newman recalls the early days of her relationship with the man she eventually married, two things stand out: free food and an ill-fated trip to the restroom .

Florence, 81, sat down to talk about her late husband, Joe, with her daughter, Audrey. It was particularly important for Florence to record her memories -- she was diagnosed with Alzheimer's disease five years ago. Their conversation was recorded as part of the StoryCorps Memory Loss Initiative.

Word had gone out in Florence's neighborhood that a young man was returning home from the service and a party was planned.

"And the family wanted to invite as many women as possible, so that he would, you know, meet people," she says.

So Florence went to an apartment in the Bronx for the gathering.

"And I went to the bathroom," she says. "Unfortunately it did not lock -- so before I went in, I yelled down the hall. And I just said, 'All right everybody, I'm going to the bathroom, the door won't lock.'

"So I go in, I drop my pants, and so I'm sitting on the toilet and all of a sudden the door opens up wide ..."

He was a good guy, he took care of me. You think I'm going to let him go?

"And it was Dad?" Audrey asks.

"No -- this big guy comes in," Florence says. "And I screamed. And who do you think ran in and grabbed him from the back of the neck and pulled him away? That became your father."

"Wow, I never heard that story."

"That's the truth. Sure, why do you think I married him?" Florence asks with a laugh.

After that day, she and Joe started to date, and they formed a bond.

The two were married for more than 50 years -- something Florence admits to teasing Joe about.

"How'd you stand me for all those years?" she recalls asking.

"What was his answer?" Audrey asks.

"Like any couple who are married together, I mean sure there are good times and bad times, but that's what life is about," Florence says. "A marriage is what two people make of it."

For more than 40 years, Joe -- whose nickname was Smoky Joe -- worked as a deliveryman for the New York Daily News. The job kept him busy for many hours of the night.

"I've never looked at anybody else. I never looked for another partner, I said, 'No way.' I had mine, we had a good life together. Sure, there were times that we argued and whatever -- absolutely, a regular life. But it was a good life."