Accessibility links
Iceland Volcanic Activity Could Go On For Months Forecasters can anticipate where the ash cloud from Iceland's spewing volcano is likely to spread, but they can't tell how long the eruption could last. The greater fear: The Eyjafjallajokull volcano could trigger a bigger eruption of a larger volcano nearby.

Forecasters can do a good job of anticipating where the ash cloud from Iceland's spewing volcano is likely to spread in the coming days, but scientists can't tell how long the eruption could last.

The Eyjafjallajokull volcano could actually continue to erupt on and off for several months, and it could trigger a bigger eruption of an even larger volcano nearby. Volcanic ash can cause extensive damage to jets -- even bring them out of the sky. The particles spewing forth are mostly microscopic bits of glass that can easily melt onto jet engine parts, block intake lines, ding windshields and scour aircraft bodies.

Weather bureaus around the world have scientists who specialize in following volcanic ash clouds.

Greg Gallina, who works at the Washington Volcanic Ash Advisory Center in Camp Springs, Md., says the nature of the ash in Iceland is typical.

"What makes this one really special is the location at which it's erupting," Gallina says.

That's because Europe's busy air corridors are downwind. The volcano itself is no big deal; Gallina says there have actually been much bigger eruptions in the past few years, in the Aleutian Islands and Russia. Satellites pick up information about these ash clouds, and some instruments can even see what they are made of. Forecasters can get a good idea about where they are heading, just as they forecast the weather.

"It's actually quite like the weather because of the fact that these particles are very small," Gallina says. "You can actually trace them along through the wind." 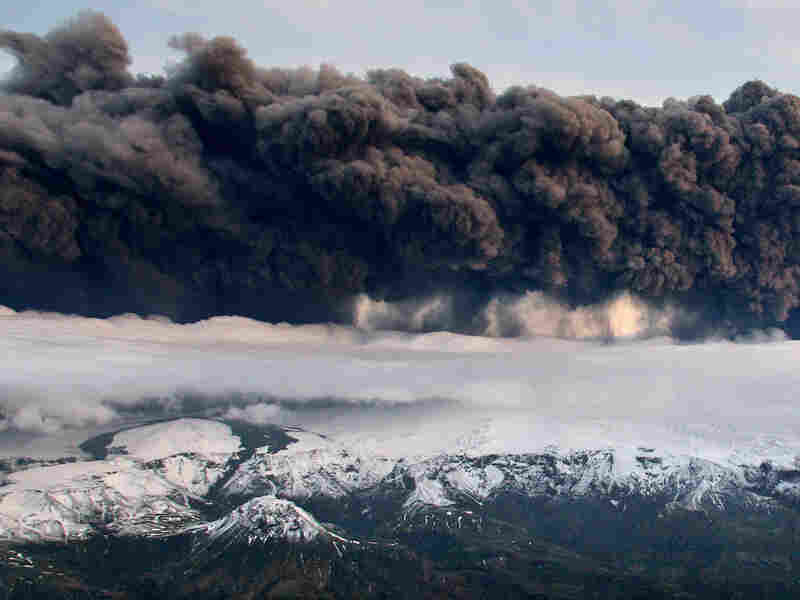 Smoke and steam hang over the Eyjafjallajokull volcano in Iceland that erupted for the second time in less than a month. The eruption melted ice, shot smoke and steam into the air and forced hundreds of people to flee rising floodwaters. Jon Gustafsson/AP hide caption 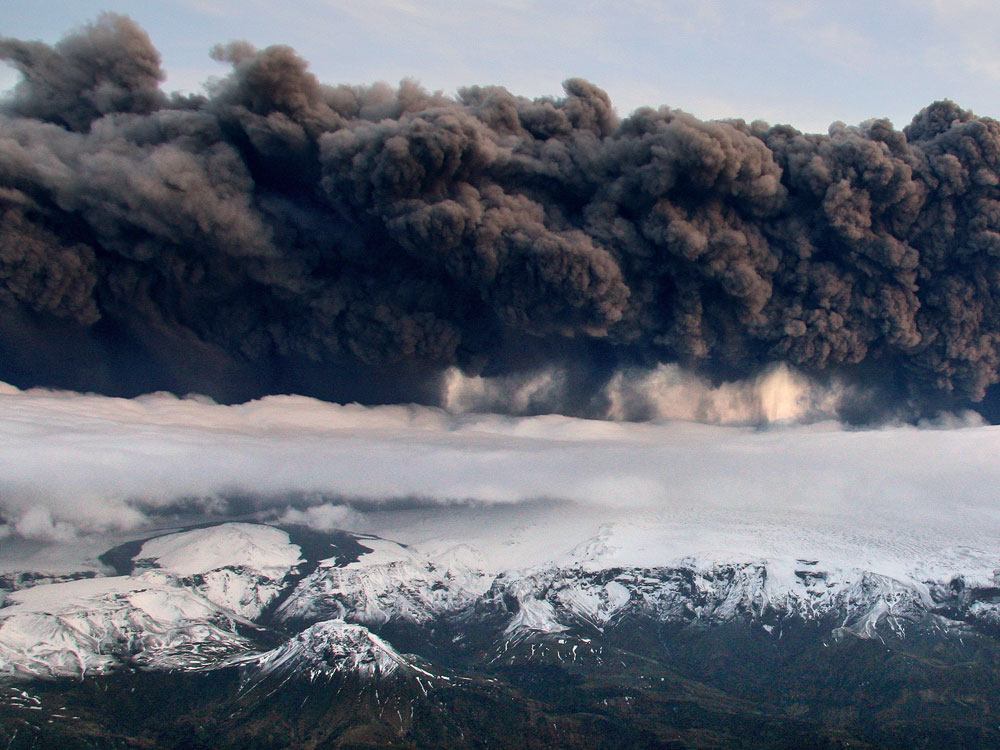 Smoke and steam hang over the Eyjafjallajokull volcano in Iceland that erupted for the second time in less than a month. The eruption melted ice, shot smoke and steam into the air and forced hundreds of people to flee rising floodwaters.

Once a cloud is in the air, forecasters can keep planes away. The trick comes in figuring out what's going to happen next, with the source of these clouds -- the volcanoes themselves.

That job is left to the geologists on the ground.

Siguhrun Hainsdottir and her colleagues at the University of Iceland have been following the activity of the volcano for three months. At first it started with a gentle tourist-style eruption.

"Sometimes magma is just beautiful, [a] quite bubbly thing that comes out of the ground, and sometimes it's more violent," Hainsdottir says.

In this case, the eruption turned violent when the red-hot magma underground changed course and started coming up directly below a glacier. The mix of magma and ice is explosive, and how long that could last is anyone's guess.

"We wouldn't be surprised if it went on for months, but on and off, like we've seen in the last few weeks, where it comes up in one location and then it comes up on another location," Hainsdottir says. "That didn't surprise us."

Hainsdottir also says she wouldn't be surprised if the magma from the Eyjafjallajokull volcano crept underground just a bit to the east and flowed into the chambers of its much bigger volcanic neighbor, Katla, which has been unexpectedly quiet in recent decades. She she says an eruption there could trigger much more disruption than what's happening now.

"We were just looking at each other this morning when we realized Katla is probably able to do way much more than that," she says. "I would be worried when Katla goes up."

And she'll also be among the first to know.