Accessibility links
Movie Review - 'Exit Through The Gift Shop' - A Rich Satire About Street Art, Or Is It A Hoax? Exit Through the Gift Shop is the sardonic title of a new art-world documentary about street artists whose renegade work has ended up selling for lot and lots of money. The credited director is the renowned English street artist "Banksy," whose true identity is a matter of much conjecture. Critic David Edelstein says that even if doubts about its authenticity linger, it's a wonderful, often hilarious film. 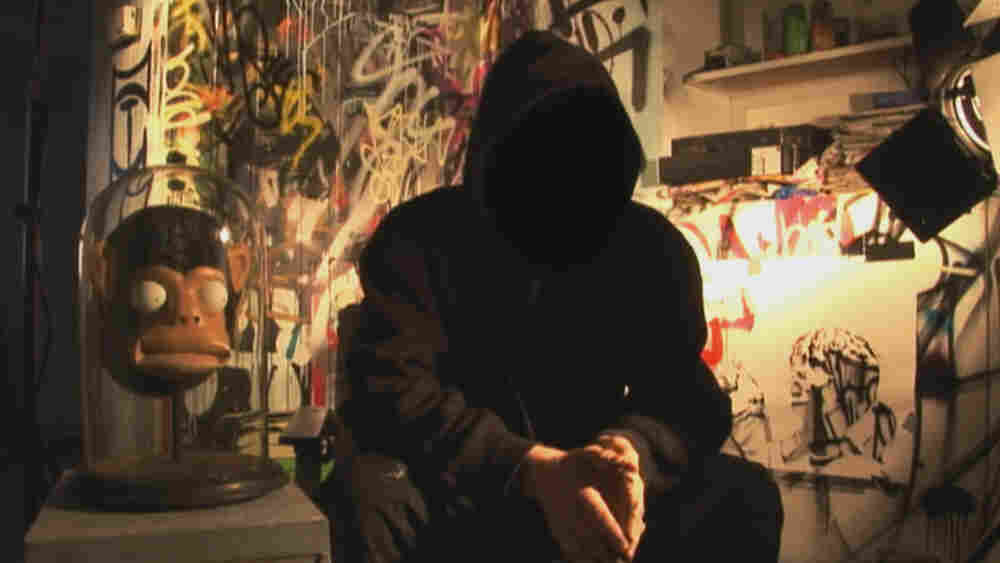 The incognito British street artist Banksy offers few clues on whether the movie about his street art is real or a hoax. Courtesy Paranoid Pictures hide caption

Exit Through
the Gift Shop

OK, this is complicated. The new art-world documentary Exit through the Gift Shop is billed as being directed by Banksy, which is the pseudonym for an incognito British street artist who has been widely denounced but even more widely celebrated. But the original director, we're told, was a Frenchman living in L.A. named Thierry Guetta, who set out to film guerrilla street artists around the world, including the most elusive of them all, Banksy.

At some point, Banksy took over the camera and Thierry became the subject. How that flip-flop happened and what happened next is the story of the film.

And it's a wonderful, often hilarious film, even if doubts about its authenticity linger. The acid narration is by Welsh actor Rhys Ifans, who explains how unemployed sad-sack Thierry became obsessed with videotaping street artists at their clandestine, illegal labors. Among those artists were: Thierry's cousin Space Invader, known for affixing Space Invader video-game images to walls and bridges; Shepard Fairey, who'd break through to the mainstream with his Obama posters; and finally Banksy himself.

Banksy appears on camera -- sort of. He's in silhouette, under a hoodie, his voice distorted. After he explains why Thierry's videotaping is important, Thierry himself speaks.

Like other New Yorkers, I lived for more than a decade staring at buildings and subways covered with eyesore graffiti, so my view of so-called street art is relativist: If it's good, it justifies the vandalism; if it isn't, throw 'em in jail. But there's no doubt about Banksy's art. As shown in Thierry's footage, his satirical assaults on politics, culture, and capitalism in settings as various as the alleyways of London, the barrier wall in the West Bank, and the rides of Disneyland are provocations of genius. 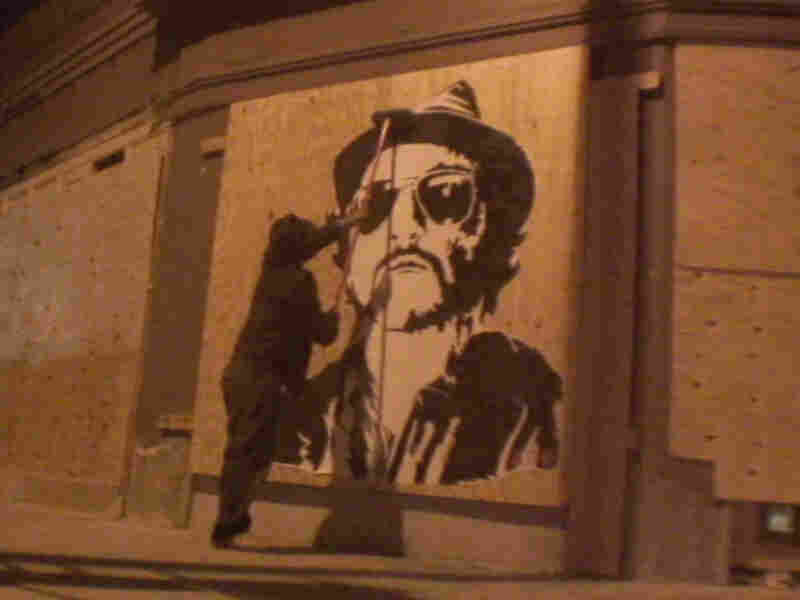 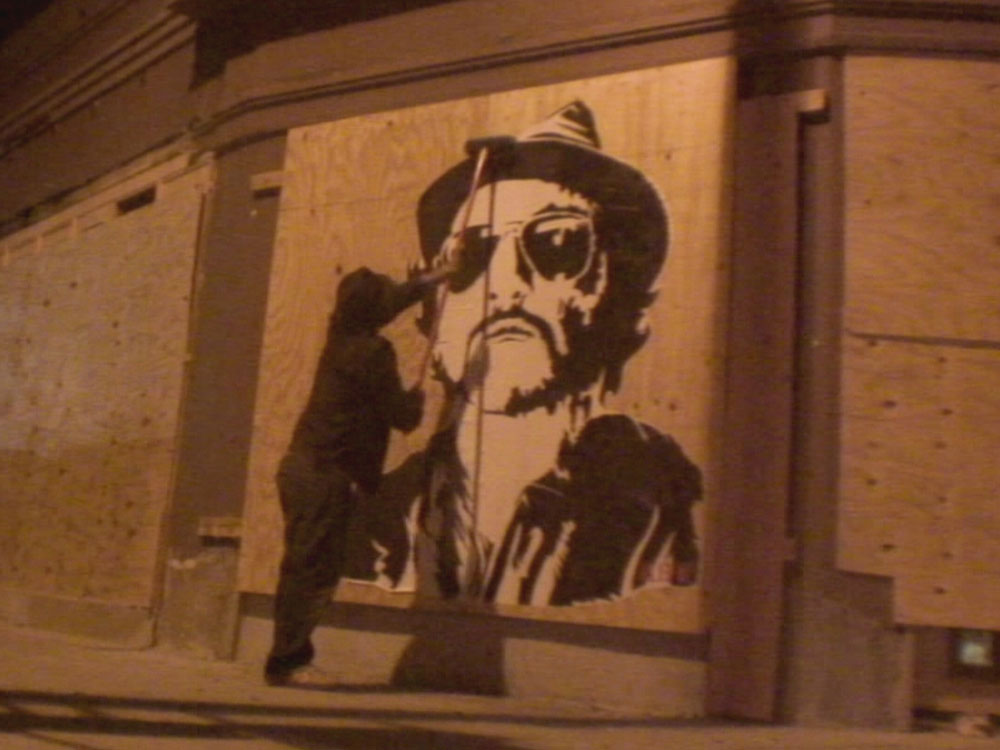 Banky's art pieces are often satirical, making fun of politicians or cultural figures. He has also climbed into the penguin enclosure at the London Zoo, writing "We're bored of fish" in seven-foot high letters.

He became the director of this film, he says, when Thierry took more than a thousand hours of tapes and edited them into a hash -- a barrage of images with no connective tissue -- or, as Banksy puts it, the work of "someone with mental problems... an unimaginable nightmare."

Banksy decided to have a shot at that same raw footage. To get Thierry out of his hair, he told the Frenchman to go back home to L.A. and try making his own street art. This leads to the documentary's final section, in which Thierry adopts the ridiculous nom de plum "Mr. Brainwash" and attempts to conquer L.A. with a massive Mr. Brainwash exhibition of paintings and sculptures in the mode of street art -- which by then had become a hot commodity.

In this last part, Thierry transforms into a classic fool, both pretentious and empty, a cross between Peter Sellers' Inspector Clouseau and his Chance the Gardner from Being There. Where Andy Warhol gave us a Campbell's soup can, "Mr. Brainwash" gives us a Campbell's soup spray-can. Elvis Presley holds a Fisher Price toy gun. Marilyn Monroe's Warholian silhouette is merged with Barack Obama's. The work is derivative of the derivative. Which makes it irresistible to many would-be L.A. art-world hipsters, who turn out in droves.

Some reporters have speculated that Thierry Guetta is a fictional creation, an actor in an elaborate Banksy prank that began years ago to expose the faddishness and philistinism of the art world and that now reaches its climax with Exit Through the Gift Shop. It's very possible.

But if I and other enthusiasts have been gulled, I don't mind too much. An early skeptic, New York Times writer Melena Ryzik, hasn't gotten to the bottom of it yet but makes the case for why the film's reality is, in one sense, moot. She writes that the film "certainly asks real questions: about the value of authenticity, financially and aesthetically; about what it means to be a superstar in a subculture built on shunning the mainstream; about how sensibly that culture judges, and monetizes, talent."

If Banksy had to manufacture Mr. Brainwash to drive home his points, the satire is too rich to make me cry foul. As far as I'm concerned, he can vandalize our movie screens anytime.